The cut of the course...

Ever wondered what went through the minds of Roman legionaries when they stood freezing, looking out over Pictland?

Some came from parts of the empire as remote as Sinope on the Black Sea coast (now Turkey) or Gades on the Atlantic coast of Iberia (Spain), others who came from Germania must have thought they were at the Roman equivalent of a holiday camp! On a good day they might have been able to see Luguvalio (Carlisle) in the west or Segedunum (Wallsend) in the east, but half the time they would have been hard put to see into their own back yard.

When you can see for some way off the scenery is stunning (been there, done that, got the 'T' -shirt). There is a lone sycamore tree in a col between two hillocks that was used in the Kevin Costner film, 'Robin Hood, Prince of Thieves' not far from Housesteads (Vercovicium) fort and a scenic walk near the Roman Vindolanda site takes you in and out of 'Britannia Major'. It shows the wall on its 'ledge', climbing and dropping with the contours. The wall sits on a geological feature known as the Whin Sill. This is a broad sheet of solid volcanic rock that stretches from Teesdale in the south of the region to the Farne Islands off Bamburgh. The Roman application of the escarpment as a 'platform' on which to base their defensive wall is one of the most significant feats of civil engineering.

You can park at Steel Rigg or alight from the bus at the *Once Brewed National Park Visitor Centre and follow the road north to Steel Rigg. Pass through the gate at the rear right of the car park. The classic view of Steel Rigg can be seen on your left. Carry on along the path and bear left through a gate, following the Hadrian's Wall National Trail left along the wall where Emperor Hadrian had this long landmark constructed around AD122. He was as interested in keeping in his British subjects as he was in keeping out the 'painted people', the Picti.

Take the path downhill, and left down steps. Next make your way uphill on a steeply inclined pathway before climbing over a stile at the top. At this point you are atop the Whin Sill. This 'crust' of hard rock was formed 295 million years ago when magma was pushed upward between limestone layers, sandstone and mudstone. It cooled in thick sheets of dolerite. This vantage point affords views over the mires dotted about. These areas of ancient peat bog shelter rare spagnum mosses and grasses.

From here follow the wall along the national trail where it drops down and climbs along the Whin Sill. At each Roman mile (1,000 paces) you encounter a mile fort or mile castle, being a fortified gateway erected to shelter weak points along the wall. After another mile you climb to Sycamore Gap, the col with the lone sycamore growing between two hillocks.

You have so far progressed one mile. Go on along the trail as where you ascend the picturesque Highshield Crags you will be unable to overlook the glacial Crag Lough on the left. Pass over a farm road and take note of the signpost labelled 'National Trail Housesteads 11/2 miles'. Hotbank Farm is to your left. Keep to the uphill path, past Hotbank Crags and Cuddy's Crags (a 'cuddy' is a cow, 'chewing the cud' and all that, right?).

Keep to the wall past milecastle 37 and pass through the woods on Housesteads Crags. Once through the wood pass through a gate, drop downhill to the historic ruins of Housesteads Roman Fort. At this 31/2 mile point of the walk, from Housesteads you have three options to ginish the loop. You can take the Hadrians Wall Bus to Once Brewed, go back on foot the way you came or pass along the path that runs along to the north of the wall, following waymarkers for the Pennine Way. This gives you a good view of the escarpment. Across Crag Lough you see the view the Picts had of Hadrian's Wall, and then there is the great view of the Whin Sill itself. Turn left at a road to get back to Steel Rigg car park to complete the seven mile (11 km) walk.

'Once Brewed, Twice Brewed: There were rival public houses nearby here, at one of which the landlord was notorious for serving watered-down ale. The 'standards' officers of the day collared the offending landlord, telling him he had to brew the ale again, hence the name Twice Brewed. That's the story I heard and I am sticking to it!

The ground you will cover is wet at times. Take the Roman Military Way that follows to the south of the wall. Alternatively take the path that runs north beyond Crag Lough.

By car, Steel rigg and Housesteads can be reached from the 'Military Road', the B6318, fifteen miles east from Brampton.

Public transport takes the form of the AD122 Hadrian's Wall bus that follows between Easter to October. This bus leaves Housesteads Information Centre and drops passengers at Once Brewed Visitor Centre. The fare for adults is £1, children 50p.

Refreshments can be had at Twice Brewed Inn, Bardon Mill, Hexham, NE47 7AN, www.twicebrewedinn.co.uk

Hadrian's Wall north of the A69, Northumberland-Cumbria 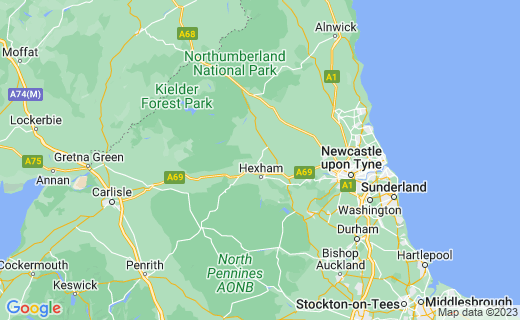 Take in the lie of the land - pace yourself, take the day off from competing with nature...

Familiarise yourself with the Roman conquest of Britain from the time of Augustus in the 1st Century onward until when they left very early in the 5th. A comprehensive guide to Roman Britain that also covers the garrisoning of Hadrian's Wall (and the less successful Antonine Wall across central Scotland). If this is the only book you'll buy about the Romans on mainland Britain then like me you'll snap this one up! If I said any more it would spoil your pleasure of discovery.

Who manned Hadrian's Wall, and why was it built?

Publius Aelius Hadrianus succeeded Trajan as emperor in AD 117, and construction began on the wall that bore his name in AD 122. Many think to keep the Picts - Picti = Painted men - out of Roman held territory, Britannia Major. The Picts came through the gates of the mile castles to trade peacefully, when not waging war on their neighbours to the south. The wall was there to stop those under their law from leaving in droves, such as the Brigantes, who rebelled against Roman rule.

A second wall was begun not long after Hadrian's wall was completed - not by slaves, but by Roman engineers and soldiers . This was the Antonine Wall, named after Antoninus Pius, built from the Firth of Clyde to the Firth of Forth. At around 37 miles in length (half the length of Hadrian's Wall), it lacked mile castles and forts and was abandoned not long after completion because it was more difficult to defend.

Men from across the empire manned the wall, from much warmer climes around Asia Minor, the Black Sea coast of what is now Turkey, from the Italian peninsula and Mediterranean lands. Latterly foederati from beyond the Limes, the Roman defences between the Danube and the Rhine, also manned the wall - poachers turned gamekeepers. Small writing tablets have been found at the Roman fort of Vindolanda (between Hexham and Haltwhistle) that revealed the feelings of those posted to 'the ends of the earth'. These were recyclable tablets that could be smoothed over and written on again, back and forth between the homeland and wherever the senders were posted. Messages and graffiti have been found here and there, written in different 'languages' aside from Latin.

The Romans left Britannia at the end of the first decade of the 5th Century, leaving the Britons to their own devices. Much of the stone from the wall has been recycled to build farms and outbuildings, even Peel Towers in the later Middle Ages during disputes over the border between England and Scotland.