Travel North - 48: A Railway Artery, Extending Eastward - 2. Commondale-Grosmont, to Link up With Whitby

Look back in time...

With no village to serve, there was no station at Commondale in 1861 when the line opened to Castleton..

Before the railway arrived there were a few scattered farms in the district. John Slater Pratt established the Cleveland Brick & Pottery Co. at Commondale to exploit local clay deposits. To enable coal and other raw materials to be brought in by rail and the finished goods taken away, a siding was laid in from the main running line. After John S Pratt died the works were taken over by John Crossley in 1872. Closure came finally in 1947.

Aside from bricks the company produced sanitary goods, building products and domestic earthenware. Three industrial locomotives were operated on site to shunt wagons and prepare trains for the railway company's locomotives to take out. Houses were built for the families of works employees, and by 1891 the community was large enough to warrant the North Eastern Railway (NER) gving the nod for a basic station. Passenger and goods receipts would be handled east of here at Castleton, as no offices were built at Commondale. The only building - on the Kildale end of the platform - was a solitary brick structure, a waiting room with toilet facilities.

Castleton: Tenders were accepted from Messrs. Smith & Wright to build the line and stations from Kildale to Castleton. Building the Station Master's house would cost the NER £489, a warehouse £393.19s (£393.95p). Passenger traffic would begin 1st April, 1861 between Stockton-on-Tees and Castleton, a shed and turntable provided to house and turn the locomotive to work the trains.

Traffic on the NY&CR route only went beyond Castleton in 1865 to Grosmont and Whitby on the Whitby & Pickering Railway (W&PR). The station was renamed 'Castleton Moor' in 1965 to prevent confusion with other stations on the British Railways North Eastern (BR/NE) system by the same name. When the station closed to goods on 7th June, 1982 it was the last on the line to do so, the others having done so in August, 1965. The passing loop was lifted and signal cabin closed the following month. The track down the branch would be singled between Battersby and Whitby with the exception of Glaisdale, controlled from Middlesbrough throughout. The station, although still open for passenger traffic, would be unstaffed in common with the rest of the branch.

Whinstone from Scale Cross Quarries and gannister from Castleton Gannister Quarries was handled through the station on trains bound for Teesside by way of Battersby. Gannister is a hard, fine-grained form of sandstone used in making silica bricks used to line steel-making furnaces.

Danby: the station was opened by the NER in 1865. Goods traffic was largely agricultural produce, livestock and livestock products.

A water tower and crane were installed in 1866 at the Grosmont end of the station. Tank capacity was 13,000 gallons, the only location between Battersby and Grosmont for locomotives to be watered.

Danby closed to goods on 2nd August, 1965 and would remain open to passengers as an unstaffed halt.

Houlsyke, a hamlet about a mile east of Danby had a siding for delivery and collection of goods by local farmers. There were no passenger facilities.

Lealholm: opened 1865 in common with other stations between Danby and Egton Bridge. The name was also written as 'Lealholme' and the station alternately referred to as 'Lealholme Bridge'. Although the 'Up' platform was rail served, there was no continuous loop, therefore trains had to shunt to enter - the platform was used for horse and livestock traffic. In 1962 the rail link was finally lifted, isolating the platform. The station closed to goods on 2nd August, 1965, the track to the goods shed lifted in 1966. In 1972 the goods depot was taken over by the Magenta kit car builders, their vehicles being of fibre-glass based on Austin chassis. The goods shed has since been used as a vehicle repair shop and MoT (Min. of Transport) test centre for roadworthiness.

Passengers still use what was the 'Down' platform in both directions and the station is unstaffed.

Castleton to Lealholm through the 20th Century

Battersby to Danby walk around the branch

Glaisdale: opened 1865 together with the stations on either side. In the 1860s and 1870s the Glaisdale Iron Company prospered, with production beginning 1866. Three blast furnaces, (accessed from the 'Down' line opposite the coal depot) ceased to operate a decade later. The works stood idle until sold off by auction in July, 1888 to John Dickson of Sandsend near Whitby. Dismantling was still ongoing seven years later. The material in the slag heaps was sold to Surrey County Council (south of London) for road building. The council leased the works' sidings to load the stone. The ironstone mines around Glaisdale also ceased production in 1876.

Five industrial locomotives had been used by the contractor Thomas Nelson in building this section of the NY&CR in 1865.

In 1933 the London & North Eastern Railway left a camping coach in the sidings at Glaisdale, available for hire by visitors to the area at £2.10s (£2.50) a week in summer, they would pay £2 weekly in late spring or late summer (until early September when children went back to school). The station closed to goods at the same time as Lealholm, remaining open to date as an unstaffed halt. It is also the only station between Whitby and Battersby with a loop to allow trains to pass. The coal depot at Glaisdale was sited near the bow girder bridge at the Grosmont end of the station, access being from the 'Up' line to the east of the platform.

A cafe opened in the waiting room at the station, trading in the summer season. Across the way the signal cabin was moved back to allow extension of the platform westward, latterly used as a 'club room' for a railway society after being de-commissioned (signalling is operated and monitored from Middlesbrough). Recently the windows were shuttered to avoid vandalism.

Egton Station: opened at the same time as Glaisdale. Goods and coal traffic ceased in August, 1965, with passenger services still running, albeit as an unstaffed halt. The station house and offices were sold off in common with other stations on the line back to Battersby. In the case of Egton as a nursery school, latterly as self-catering accommodation. Bus shelters have been provided for waiting passengers in inclement weather.

The station has been known for some time as Egton Bridge. The closed coal depot cells lie empty at the top end of the station car park. Just outside the station is an inn named after local martyr Nicholas Postgate (see picture below). 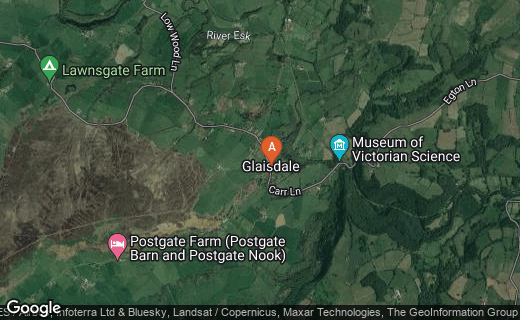 Scene of industry in the 19th Century, the station is the only passing point for trains on Whitby-Battersby branch line that links with Middlesbrough

Glaisdale and Egton Bridge (and a close look at what's left at Egton Bridge, of what was once a thriving country station...

Follow Messrs Groundwater and Thompson along the course of the railway through Eskdale or Esk Valley from Battersby to Whitby with its junction at Grosmont for the North Yorkshire Moors Railway. Both equally scenic routes, Eskdale and Newtondale draw tourists for near and far. Whet your appetite for travel down the branch with background information to feed your appetite for knowledge. Other lines are covered, some lost to history, others - like this one - still used and thriving..

Grosmont and the North Yorkshire Moors Railway (W&PR to Pickering)

Grosmont had been opened since 1835.

The Whitby & Pickering Railway (W&PR) had operated a horse-drawn passenger service from Whitby to Pickering via a rope-hauled incline at Beck Hole. Goods were locomotive hauled on either side of the incline until the Deviation route enabled locomotive hauled trains - passenger and goods/mineral - to operate throughout, albeit over severe gradients in places.

First referred to as 'Tunnel', Grosmont would see the NY&CR branch reach here in 1865 with trains running through from Stockton-on-Tees to Whitby. A new platform was added to the station on its south-west side to give Grosmont its 'V' or wedge shape familiar to travellers today.

In his book, 'The History of the Whitby & Pickering Railway' G W J Potter pointed to potential problems arising from the new alignment. The line from Battersby was largely single track, and two platforms were added only to selected stations. The 'Up' and 'Down' (Stockton and Middlesbrough in this case were 'Up') Battersby trains were booked to arrive in short succession. If the train from Battersby was late and that from Whitby on time, signalmen at Grosmont had two choices. They could stop the one from Whitby outside the station to wait for the other to clear the line, allowing the train from Whitby into the 'Up' York line (Pickering had by this time been connected by way of Rillington Junction to the former York & North Midland line from York to Scarborough). After the train to Whitby left, the train for Stockton reversed back to the junction and worked onward. Potter remarked on problems caused to passengers by the delays, that the hold-ups would accumulate over the day. Nothing seems to have been done all the same.

Industry arrived at Grosmont in 1862, shortly before the Battersby line, with Charles and Thomas Bagnall opening operations at the Grosmont Iron Company's works. Two blast furnaces were erected, a third was added in 1875. Additionally several local mines were bought. A standard gauge (4' - 8.5") line entered the works from the NY&CR at the Murk Esk bridge and crossed the iron works past the Egton road. This line connected with a network of sidings within the works, passed the furnaces and came out again towards Whitby, joining the W&PR branch opposite the brickworks site. When the furnaces worked to capacity two coke trains were needed daily, accessing the works from the NY&CR. The iron works was profitable until the closing years of the 1880s, achieving a mean annual output of around 40,000 tons of pig iron for processing elsewhere. With the growth of steel production on Teesside and waning local mineral supplies closure came in 1891.

Removal of slag for road stone or slag wool went on a further thirty years. Four industrial engines were employed in the works by the Bagnall brothers, including 'Arncliffe' from the former Glaisdale works. As mentioned already, a brickworks opened at Grosmont alongside the original 1835 line that became the 'Up' line under NER ownership. The remains of the brickworks can be seen on the east side of the line near the storage sidings (close to where the former Falsgrave signal bridge or gantry has been erected by the NYMR.

Grosmont closed to goods in early August, 1965, the yard now a car park for patrons of the NYMR. The brick plinth based wooden signal cabin by the goods depot rail access point was removed in the late 1980s, replaced temporarily by a ground lever frame at the level crossing (where the Co-operative shop stands). A new signal cabin was built on the other side of the line in the style adopted by the NER Central Division. Bricks for this structure were taken from the demolished three storey Whitby Town signal installation (now the site of the Co-operative supermarket close to the Marina). and for two years now has used a designated platform (Platform 2) with re-laid track to accommodate run-round facilities for locomotives, steam or diesel.