Travel North - 15: Coastal Walk from Saltburn Gill to the Clifftops, Back Around Skinningrove and Huntcliff

From the low-lying hamlet of Old Saltburn

Saltburn's history evolved around fishing and smuggling, due to its relative isolation on the coast. The lie of the land helped the smugglers for a long time until their operations were curtailed by the revenue men, backed up by the Redcoats when the Napoleonic Wars came to an abrupt end at Waterloo in June,1815. The easing of taxes after the Napoleonic Wars also contributed to the demise of the illicit trade. The walk in hand is strenuous, but by no means too strenuous for your average family with a range of children between the ages of about ten and fifteen.

The walk will blow the cobwebs out of your soul and invigorate you, and there are refreshment stops along the way. As a route the walk is ideal for serious walkers if they wish to take in the whole length without breaks. There are great views of the sea and countryside, starting and ending in Old Saltburn's large car park near Cat Nab. Walking distance is eight miles (13km), the going moderate at most times of the year, fairly well-drained and can take around four hours - not exactly a 'route march'.

Beginning at the car park cross the road and pass the waterworks on your left before coming to a footbridge. A sign points into Saltburn Gill Nature Reserve. After crossing the stile you follow a path that brings you high above the Gill. Steps lead to two more stiles about 170 yards (50m) apart and a footbridge leads to a pathway close to Saltburn Gill.

Follow straight ahead towards the houses on the western side of Brotton. Where the track takes you on to the A174 Whitby road turn left up the hill and pass under a railway bridge. The High Street is ahead with its Methodist church on the left. Take the steps up on the right opposite No.42 and follow the path under overhanging trees to playing fields. Keep left walk straight on through a cemetery to Kilton Lane. Cross over and turn right, then left onto Winchester Road. Follow this road to the junction with Canterbury Road and follow a walkway on the left as far as a Guibal Fan House (a large concrete structure that housed a mine ventilation fan). Cross a road and follow the track that leads gently downhill past Griggs Farm. Veer left around the edge of a golf course and cross the stile, on to a path close to the fence on the left. Bear left and over another stile. At the next stile a notice points to Cattersty Gill Nature Reserve. Head toward another stile.

Bear left away from Skinningrove along Cattersty Cliff and pass another Guibal Fan house as far as some metal sculptures. Here you follow signs for the Cleveland Way with its far-ranging views including Roseberry Topping in the distance to the south-west. The clifftop path leads toward a further stile, past which make your way down a few steps. Follow the road around to the left to reach the starting point at Cat Nab Car Park.

To get there from the south: a) take the A19 north from York/Thirsk/Northallerton; b) take the A1(M) to Scotch Corner and then the A66 east past Middlesbrough, follow signs for Redcar then Saltburn; c) take the A174 north from Whitby.

Parking: Cat Nab Car Park is on the lower promenade at Saltburn-by-the-Sea across the road from a seaside cafe and children's amusement centre. Nearby is Marske-by-the-Sea to the west with Redcar beyond. Southward is North Skelton and Brotton is up the winding gradient road to the south-east. Back at the car park cross the road to the cafe and children's amusements and turn right to the Ship Inn public house with its outside tables for a first class view eastward to Huntcliff and north-westward to Teesmouth beyond Marske-by-the-Sea, Redcar, Coatham and Warrenby.

James Cook Senior was buried in the graveyard of St Germain's Church at nearby Marske-by-the-Sea in 1772. On the road to New Marske is Marske Hall, lately a Leonard Cheshire Home just away from Marske's busy High Street. On the sea front is Cliff House, built as a hotel but more recently became a home for the elderly. There are several public houses and inns around Marske, including another Ship Inn where I stayed with my wife in 1984.

Riftswood there is another pleasant walk with Italian gardens along its northern slopes. A presentable cafe serves refreshments for those of a less athletic persuasion. A miniature railway operates along the valley bottom from the mouth of the ravine to the Italian gardens in the summer season for smaller children - even for older 'children'. 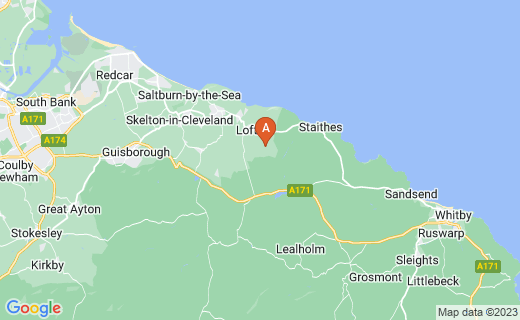 Spend a while around the pier and cliff lift, take a ride up and down

Take time out to follow David Brandon along the Yorkshire coast between the mouth of the Tees and Humber, stop off at little known villages such as Skinningrove, Runswick and Sandsend as well as the better known Whitby, Scarborough, Filey and Bridlington. High cliffs with rolling hills and moors behind, or low-lying Teesside near Middlesbrough in the north and Withernsea or Hornsey in the east near Hull. Each area has its own character.