A Video From The Hoover Dam ~ "Dam" Tour

Pictures From The Dam Tour Of Hoover Dam

We recently read a story that suggested the requirements one needs to be a true Las Vegan... Las Vegian... resident of Las Vegas, and along with the story was a "bucket list" of sorts, full of things that every Las Vegas resident should do at least once. On that list was to take the full length tour of Hoover Dam that takes you through the tunnels and inner workings of this architectural marvel, and the name of the tour happens to be "The Dam Tour." So, being curious, we decided to cross this one off of the bucket list and become true Las Veg.... whatever natives are called here.

We decided to get up extra early one Saturday morning and drive over to Hoover Dam to take the Dam Tour. So, I'm really not being foul mouthed when I say to take the Dam Tour, that's the name of it! And believe me, you will hear jokes about the Dam tour while you're on it. That's half the fun of this Dam tour.

The best suggestion, if you are going to do this tour on a weekend, is to get there EARLY. I mean like 8:15 early, when the covered parking garage first opens. That way you are pretty much sure to get a covered parking spot. This is very important if the temperature is supposed to go over the 100 degree mark. The day we went we were lucky, it was only going up to 98 degrees!

You enter to begin this tour by going down an escalator, and once the doors open at 9 am, you are sent through a security system very similar to the security at most airports these days. You will need to put all metal items into a plastic bin, and if you are wearing boots or any kind of dress shoes, you will most likely be required to take them off. You go through a metal detector, and once you have the green light, you can then proceed to purchase your ticket for admittance.

The cheapest ticket is to the visitors center only. The medium priced ticket is a ticket to go on a partial tour of Hoover Dam, which is a shorter version of the full tour. Or you can take the Dam tour, which is the whole tour, including going through small tunnels, looking out through vents from the inside of the Hoover Dam, and seeing the fascinating generators and machinery used to produce electricity for several states.

The tour guides do an excellent job of taking you through all of Hoover Dam and explaining what everything is and how it came to be. These are Park Service employees, and we felt like they should be applauded for taking so many visitors through Hoover Dam every year, visitors from every country and region of the world you can imagine, and making every tour feel like it is their first time on the tour. They are so helpful, and very patient with questions that I'm sure they have heard and answered a thousand times.

You don't want to take this tour if you are claustrophobic in any way. You will be walking through small tunnels and dimly lit places that could make one have an attack if they are claustrophobic, not to mention that you will be taking elevators that make you feel like you're in a can of sardines. Fishy jokes aside, it is an interesting trip.

One of the fascinating things we saw was a little yellow box on the floor in the corner between two tunnels. On this box was written "Do not touch or kick earthquake sensor." Everyone behaved and left the box alone... but you know there will probably be someone who is tempted to do just that, after all, what could a harmless little kick do?

WELL, it sends a signal to the meteorological center in Colorado letting them know that Nevada is experiencing an EARTHQUAKE, so whatever you do, do NOT kick or touch this box! Besides, there is a camera above it in one of those department store style security domes (I used to work in retail so I knew exactly what was in that smoky colored dome). So, if you kick it, there most likely will be consequences.

This prompted the question, what if there IS an earthquake, what will happen to Hoover Dam? Well, according to our tour guide, it IS thought that Hoover Dam will withstand an earthquake of up to 8.5 magnitude. After that, it is really unknown exactly what would happen. I just hope that we don't get a greater than 8.5 earthquake in my lifetime. I don't think I want to find out what would happen, although we did hear something about Arizona possibly being more affected than Las Vegas would be... still, I hope it never happens!

Once the dam tour was over, we were also allowed admittance into two visitor's centers with the price of our ticket. The first was the "old" visitors center, and it is definitely worth checking out! There you will see a model made of several different states, different dams in those states, and learn about how many states are affected by the enormous Colorado River. AND, you also learn the reason for building Hoover Dam in the first place, in a more graphic and easier to understand way.

Years ago, the Colorado River kept causing either severe flooding throughout the desert Southwest, or extreme drought. It was thought that by harnessing the power of the Colorado River, by controlling how much water is allowed to flow at a time, that the flooding would be minimized. And in addition, electricity could be created to help to power seven different states in the United States, and part of Mexico. After seeing this model, and listening to a brief 10 minute explanation, which used lights that shined on varying sections of the model, the whole thing made a lot more sense. It is definitely an experience worth having to help you to understand the idea behind and the reasons for building Hoover Dam much better.

After Taking The Dam Tour, A Stop In Boulder City Is Wonderful

After we had all the Dam fun we could handle, we were hungry and decided to stop in historic Boulder City, Nevada for lunch. This is a quaint, adorable little town with so much history and personality, it's hard to believe it is only about 23 miles from busy bustling Las Vegas! It might as well be a world away!

All of it's charm and rural atmosphere make this a fascinating city to visit either before or after a visit to Hoover Dam. The downtown area is quaint and reminded me of towns we had visited on vacations from my childhood. Kitschy little gift shops, along with little restaurants and pubs, a simply beautiful little doll shop, and of course the requisite "Alien" shop. It wouldn't be a Nevada tourist town without at least ONE "Alien" shop!

We stopped at the fantastic Bighorn Restaurant And Lounge, where my husband had a "Buffalo burger," his first time sampling buffalo meat, and I had a seafood salad sandwich that was out of this world! It was a fantastic place for lunch, and reasonably priced. The wonderfully helpful and friendly wait staff makes this a stop definitely worth making.

Afterward, we walked down the streets of this quaint and adorable little town so full of history. The restaurant we ate at, the Bighorn Restaurant and Lounge is located directly across the street from the historic Boulder City Hotel. And the hotel features a Hoover Dam museum that is very interesting.

Boulder City was built to house all of the men that built Hoover Dam, along with their wives and families. And in an interesting aside, Boulder City is one of only TWO cities in the state of Nevada that does NOT allow gambling! There is a movie theater, great restaurants, fascinating quaint little shops, but no gambling to be found anywhere in town. If visitors want gambling, they have to go down the road to Las Vegas.

We walked by some cute and kitschy little shops, one featured Indian Jewelry and dead cows for sale (any interest?) And there was also a fantastic little doll shop there that I am going to go into next time we go to Boulder City. We just window shopped on this day. One of the windows featured realistic looking dolls that were made to look like the Wizard of Oz characters.

There were antique shops, emporiums, great little restaurants, including a pizza place and the famous "Coffee Cup Cafe" which was featured on the hit food network TV show "Diners Drive-Ins and Dives." And of course, what Nevada tourist town would be complete without the requisite kitschy little "Alien" shop complete with a green "alien" in the window?

On the street corners of beautiful Boulder City are copper statues that were created by various artists. One of them is a statue of Peter Pan and Tinkerbell, another features one of the boulder dam workers (originally it was known as Boulder Dam, later the name was changed to Hoover Dam) carrying a broom, and other statues that tell the story of the earliest residents of Boulder City in a very creative and artistic way.

Another very famous attraction in historic Boulder City is called Hemenway Park. Virtually every morning and in the early evening, big horn sheep come down from the mountains and graze on the grass in the park... and they do this right alongside the humans that are visiting the park. It is fascinating to watch them, and so much fun.

Just don't try to touch them or bother them, but enjoy watching them. They are used to people and will pretty much ignore people and carry on with grazing in the shade. If you catch them at the right time of year, you may even see male bighorn sheep "butting" horns, fighting over the female sheep. Truly a fascinating glimpse into some of the nature of Nevada, bighorn sheep are a huge part of the state's history, and the history of the Western United States as well.

Boulder City Nevada is a town that is definitely worth visiting on any visit to Hoover Dam.

You'll have a great time in the best Dam town ever built... no really, it is the town that was created by Hoover Dam. 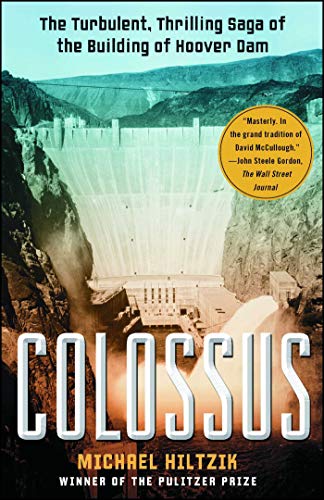 Colossus: The Turbulent, Thrilling Saga of the Building of Hoover Dam
Buy Now