Temples & Places to visit in Govardhan 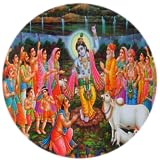 Govardhan is an 8 km long hill located near the sacred town of Vrindavana in Uttar Pradesh, India. Govardan or Giriraj is identified as a natural form of Lord Krishna. While the hill was about 3km (2 miles) high 5,000 years ago, but it is said that due to the curse of Pulastya Muni, it is sinking the height of a sesame seed daily. Presently at its highest point, the hill is just 25m (80 ft) high.The parikrama (circumambulation) route is 21km (13 miles).

The curse of Pulastya Muni

It is said that the height of Govardhan is decreasing day by day (a seed of mustard daily) because of the curse of Pulastya Muni.

According to mythology,during the Satya Yuga Pulastya Muni went to the Dronacala (the king of mountains) and requested for his son Govardhana. The king was very depressed as he could not bear the disconnection from his son. But finally he agreed to send his son with Pulastya Muni on the condition that if he would put down Govardhan, he would stay there.

On the way back, the Muni had to put Govardhan down while passing through the Braja Mandala in order to reply to the nature’s call. On returning he found that he could not move Govardhan from that place. He became angry and cursed Govardhan to get reduced in size slowly. It was around 64 miles long and 40 miles wide, 2 miles high and now it has reduced to only 80 ft.

The lifting of Govardhan

According to the scriptures, Krishna saw huge preparations being done for the annual yajna to appease Indra, the God of Rain and questioned his father Nand Maharaj about it. Krishna asked his father and the villagers to offer prayers to Govardhan Hill as the hill had various assets to heal and protect the villagers and served as a grazing ground for their cattle The villagers were convinced with the logic of Krishna and did not proceed with the special yajna to honour Indra. Indra became angry and flooded the village by continuous rains. Krishna then lifted Mt Govardhan on his little finger and held it up as protection to the villagers and cattle from the rain. Accepting his defeat,Indra recognized Krishna as supreme. 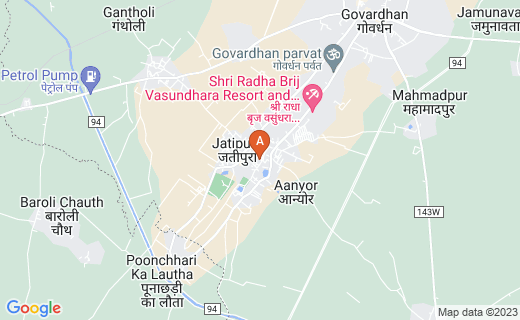 Govardhan Puja or Annakut is celebrated the day after Diwali. It is said to be the day when Lord Krishna defeated Indra, the deity of thunder and rain. Annakut or a mountain of food symbolizing Govardhan is decorated.Small hillock symbolizing Govardhan is made with cow dung and is decorated with flowers etc. Variety of food items or bhoga is prepared to offer to the Lord. Naivedya of the Chappan Bhog (means 56 food items) or 108 food items is prepared in order to offer to the Lord during puja. The devotees move in a circle around the hillock singing prayers glorifying Lord Govardhan.

Govardana Parikrama (circumambulation — going 21 kilometres (13 miles) around the hill) is a sacred ritual performed by devotees for spiritual purification. Parikrama of Govardhana hill starts from the Mansi Ganga Kund and after parikrama of 21 kilometres, covering important tanks, shilas and shrines such as Radha Kunda, Syama Kunda, Dan Ghati, Mukharavinda, Rinamochana Kunda, Kusuma Sarovara and Punchari, it ends at Mansi Ganga Kund only. Here are a few prominent places to visit at Govardhan:

Daan-Ghati is one of the two main temples in Govardhan. The other temple is called Dasvisa. Daan Ghati is a temple where the deity is actually in the form of a rock and is said to be going down in earth by a few millimeters every year.

Kusum Sarovar is a beautiful sandstone monument which is approx. 25-minute walk from Radha Kunda. It is said that here the gopis would pick flowers for Krishna. The ghats at this kunda and the buildings above the kunda were built by Jawahir Singh, the King of Bharatpur during 1764 in honor of his father Raja Suraj Mall.

Haridev Mandir which is made of red rock is located on the southern bank of Mansi Ganga. Haridev is one of the four presiding Deities in Vraj. People take darshan of Haridev during the Govardhan parikrama.

Mansi Ganga Kunda is situated in the middle of the Govardhan village. After Lord Krishna killed Vatsasura, He was told to bathe in the waters of Ganga for purification. Unwilling to travel a long distance, Krishna brought Mansi Ganga here in the village itself and took bath in it.

One more time around