Overview. The nice thing about state parks is that they are everywhere in the United States. All fifty states have state parks that typically preserve a natural area, provide recreation - often boating - picnic tables, camping, hiking, and biking trails for the public. There are also state historic parks, sites which preserve some historical aspect of a state’s past. Many state parks, not surprisingly, were developed during the 1930s by the C.C.C. and their primary purpose was recreation. Even those that preserved unique natural areas often got a much needed boost during the Great Depression as C.C.C. work crews built new facilities, roads, and campgrounds. Some state parks are truly unique and it’s probably better that they did not become national parks as they remain well kept secrets, or lesser known, and provide some of the greatest scenery in the country. Others are state-sized tracts of land, such as Adirondack Park in upstate New York, the nation’s largest state-run park. Here is a list of ten state parks that are unique among state parks. Although not exhaustive, they represent a fine cross section of what is and has been preserved, at the state level, for future generations.

Baxter State Park, Maine. The largest state park in Maine and New England, Baxter State Park in northern Maine is a 209,500 acre park that was bequeathed to the state by the owner of the land, Percival Baxter, between 1931 and 1962. It is actually a wilderness park with restrictions on the number of people who can enter per day. The centerpiece of this amazing tract is Mount Katahdin (5,268’), the tallest mountain in Maine and the surrounding lakes and boreal/northern hardwoods which harbor moose, bear, and bobcat. Katahdin’s granite bulk rises in virtual isolation from the lowlands as is considered a monadnock, or a granite peak that rises in isolation from the local penne plain. One of the most scenic spots in the park is from Chimney Pond, at the mountain’s rock-strewn base. Bring hiking boots.

Franconia Notch State Park, New Hampshire. Franconia Notch State Park occupies a narrow sliver of land in the White Mountains and preserves the glacially-carved defile of Franconia Notch (1,900’), a spectacular granite canyon that is as close to Yosemite as you’ll find on the eastern seaboard. The state park has number of beautiful waterfalls, potholes, and gorges. Not to miss is the Flume, a series of incredible falls, potholes, and gorges, and the Basin, a giant pothole, 30 feet deep, and a waterfall. This state park has a number of trails that fan out across the bottom of the valley and includes a number of lakes and scenic lookouts across the high peaks of the White Mountains. The Old Man of the Mountains, now collapsed, was visible from Franconia Notch and one of the most memorable natural rock formations which inspired Hawthorne’s writing. If winter sports is your thing, Cannon Mountain, within the state park, has excellent downhill skiing. A number of trailheads start from the roadside in the park and head up to the high peaks such as Franconia Ridge.

Hickory Run State Park, Pennsylvania. This state park in eastern Pennsylvania has a great mix of natural phenomena as well as some good campgrounds. What makes it geologically unique is the boulder field which is unlike anything on the eastern seaboard if not the entire country. A National Natural Landmark, the 16.5 acre boulder field is the result of glacial melt water action. There are also waterfalls, such as Hawk Falls, and a number of good hiking and biking trails. The state park is only about one hour north of Philadelphia and covers 15,990 acres.

John Pennekamp Coral Reef State Park, Florida. Unique to the state park system is this underwater park, the largest and only one of its kind in the United States (with the exception of the adjacent Biscayne and Dry Tortugas National Parks). It has preserves a vast underwater coral reef realm of subtropical fish and coral formations since 1963. The park is accessible from Key Largo at the head of the Florida Keys and sees 1,000,000 visitors annually so the park’s unique and fragile ecosystem is under a considerable amount of strain. Popular activities in this 53,000 acre park include snorkeling, scuba-diving, fishing, and swimming.

Porcupine Mountains State Park, Michigan. Imagine glacially-formed lakes surrounded by mountains and you think of Colorado or the North Cascades. Well this one is in none other than Michigan. The mountains are not towering peaks, but instead low, old, and worn, but the remains of and ancient mountain range nonetheless. The scenery that unfolds is indeed the product of the last glacial sheets that retreated from this area about 10,000 years ago. The Porcupine Mountains, despite being in the upper Midwest rise a respectable 1,000 feet from their base, not something you typically see in the nation’s heartland.Porcupine Mountains State Park was established in 1945 and in 1972 was designated a wilderness state park. It preserves 59,020 acres on Michigan’s Upper Peninsula. The gem of the park is Lake of the Clouds, a long glacially formed tarn. Fauna includes moose, gray wolves, black bear, fisher, martens, bobcats, lynx, and porcupine (of course), as well as virgin stands of old growth hardwoods.

Custer State Park, South Dakota. Appearing as a big green rectangle on most maps, Custer State Park combines the flora and fauna of the high prairie and rolling, forested, granite Black Hills making it one of the largest state parks in the country. Anchoring the southeast border of the Black Hills region and covering 71,000 acres, Custer State Park was established in 1912. The highlights of this park include the Wildlife Loop Road which is a veritable safari of sorts passing 1500 free-roaming Bison. Pronghorn, elk, and mule deer are often seen along this scenic road too. Less visible inhabitants of the park include mountain lion, bighorn sheep, and mountain goats.

Hot Springs State Park, Wyoming. This state park in central Wyoming in the town of Thermopolis is probably the best keep secret in the West. It’s not big, doesn’t contain any rare animals (although it does have a heard of managed bison), and the scenery is nothing untypical of central Wyoming. Instead it is one of the largest hot springs in the world by output and around this was built the state park. It was the first state park in Wyoming, established in 1896 by a treaty with the Arapahoe and Shoshone tribes. The springs gush 3.6 million gallons of water per day at 127 degrees Fahrenheit. There are 27 types of mineral present in the water. Soak it up!

Kodachrome Basin State Park, Utah. The name of this state park is not accidental and it represents one of many beautiful state parks in Utah which is often associated with the many national parks that rob the imagination. The result of this is that many overlook a host of unbelievable state parks in Utah such as Kodachrome Basin, Coral Pink Sand Dunes, and Goosenecks (of the San Juan), to name but three.Kodachrome Basin is located in southern Utah about twenty miles from Bryce Canton National Park and covers 2,240 acres – very small when compared to the adjacent national parks. It was established in 1962 and the main activities include hiking and not surprisingly, photographing the spectacular sandstone formations for which the park is known. The park has camping facilities and hosted almost 53,000 visitors in 2010. The park is at an elevation of 5,800 with variations.

Anza Borrego Desert State Park, California. Anza-Borrego Desert State Park is the largest state park in the west and the second largest in the United States after New York’s Adirondack Park. The 600,000 acre park is a vast desert preserve famous for harboring the desert bighorn sheep and known for blistering hot temperatures for half of the year. Located mostly in San Diego County the park’s elevations range from sea level to more than 6,000 feet and natural features include alluvial fans, palm oasis, canyons, abandoned mines, narrow defiles, and exposed fault lines.

Chugach State Park, Alaska. Just outside of Anchorage is one of the greatest state parks in the United States that offers unspoiled views of fjords, lakes, icy peaks, virgin forests, and a chance to glimpse brown bears in their natural habitat. Covering 495, 204 acres, Chugach State Park is the third largest state park in the United States. It offers camping and hiking with a number of trailheads and three campgrounds. Access is by the Seward Highway which is a beautiful scenic byway. Dall sheep, bear, and a possible chance to see Beluga whales, the smallest whale specie, from Beluga Point along the highway, are just a few denizens that might be seen in this vast reserve. Most of the park is wilderness and accessible by foot. 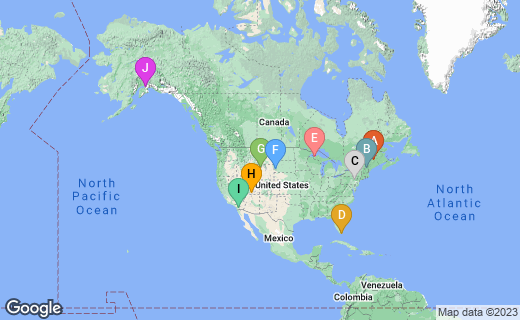