Ten Things You May Not Know About Guam

I lived in Guam for four years and these are what I learned while living on the island.

This little isle has a special place in my heart. I was stationed on Guam for four years (from 2004 to 2008) when I was in the US navy. I never heard of Guam before I chose to come here. In fact, I had the opportunity to get stationed in Spain, Italy, Iceland, Hawaii, and California when I was up for orders to go to a new duty station. I chose Guam, and without looking it up and this was before Wikipedia or Google was a thing to use. For some reason I thought it was a Caribean Island. I was dead wrong and most of my fellow Navy Sailors informed me that I made a mistake and that I will regret it. I was intrigue and eager to go to this island and I have no regrets. I actually would be willing to move back there in an instance and is my wish list of places I would like to live when I reach retirement.

Guam is the largest island in the Micronesia. Micronesia's most well known reputation is that it is the location of the deepest part of the world's oceans, Marianas Trench. It is less than a four hour flight to the Philippines and about an eight hour flight to Hawaii. 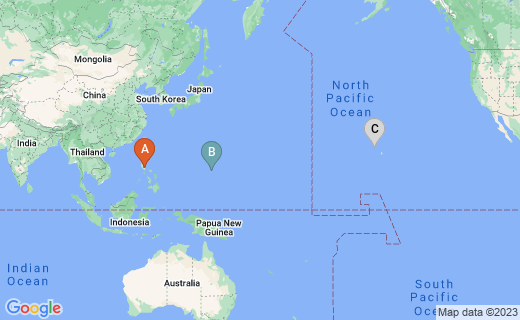 I could go on and on about what to do on Guam but you can look that up yourself on Tripvisor or just do a search on the internet "Things to do on Guam." I will not do that. What I will tell you is some little known facts, trivia, and experiences that you may not be aware of when you research Guam. These are things that people living on Guam or going to Guam don't mention. Some are good, some are bad, and some are just strange.

1. Guam has the largest Kmart in the world.

Guam boast that it has the largest Kmart in the world. It maybe the biggest "regular" Kmart, but a Big K or a Kmart Supercenter seems so much bigger. Guam's Kmart sells all sorts of products that are normally associated with a Big K or a supercenter but it is considered just a Kmart. In this Kmart, it sells everything from toiletries to electronics to groceries but it caters to the large Korean and Japanese tourists. Half the products in this Kmart are in Korean or Japanese to make the tourist feel like home.

2. Guam has the "tallest mountain" in the world.

Mount Lamlam is 1,332 feet above sea level. But thanks to the Marianas Trench (the deepest part of all the world's ocean), it's underground base becomes the greatest change of elevation on Earth compared to the height of Mt. Everest.

Brown Tree Snakes are pests to Guam. They are not indigenous to Guam. It has been theorized that they stowed away on ships from Australia and Indonesia and sneaked their way onto the shores of Guam. Since they are not naturally from Guam, they do not have any predators. This means they are free to roam and eat all the birds they want. These snakes have been the cause of the extinctions of some birds that were only found on Guam. Also, these snakes have been known to cause power outages because they manage to squeeze their way in electronic substations. Not only have these snakes made some birds permanently disappear, they have cost an annual $4 million dollars of repair cost because of power outages.

Here is an anecdote from a friend of mine while I was in the Navy.

"In the middle of the night, I had to use the bathroom. The bathroom was located on the other side of my house. I would have to cross the laundry room to get to the bathroom from my bedroom. I walked through the laundry room without turning on the lights and felt my face hit something. I knew I didn't have laundry hanging up on the lines so I turned on the light to see what I walked into. Shockingly, it was a six foot brown tree snake just napping on the laundry line. I immediately called pest control at 2 AM in the morning and they came to take it away. I ask them what they were going to do with it and they said they were going to kill it."

Brown Tree Snakes are such as pest that citizens are encourage to kill it themselves or call pest control. Even the US government are involved in eradicating these snakes. Last year, in December 2013, the US government dropped 2000 dead mice laced with Tylenol in the jungle area to poison these snakes. Apparently, Brown Tree Snakes are deathly allergic to acetaminophen, the active ingredient in Tylenol.

*Note: Brown Tree Snakes are not rampant in urbanized areas of Guam. There have been sightings of these snakes in houses and yards occasionally but are rarely reported. I myself have never seen a Brown Tree Snake in person and from what I was told, they are normally found in the jungle areas.

4. There is a No Helmet law on Guam

5. Guam is a great place to scuba dive

I don't scuda dive but I had a lot of friends in Guam that did. Guam and the surrounding Micronesia Islands like Yap, Pulau, and Pohnpei has a lot of cool things to see underwater. There are plenty of dive shops to get your gear and also you can arrange a dive with your hotel. Guam isn't world renowned for its diving experience but it should be. It is one of hidden gems for scuba diving. Some things you will see underwater: sunken ships and planes (from World War II), coral reefs, and "Blue Hole".

6. MMA is very popular in Guam

The locals on the island are intensely into mixed martial arts (MMA). They have their own league similar to UFC called Pacific Extreme Combat (PXC). PXC is based in Guam and the Philippines. Much like in Thailand, where there is a Muay Thai fight every week, there is an MMA fight every week on Guam.

7. Every Wednesday is Chamorro Village Day

Wednesday was my favorite day on Guam. Every Wednesday the locals would gather at a community area called Chamorro Village and sell local food and drink favorites and souvenirs. It's for everyone on the island but mainly caters to the tourists. I love Chamorro and Filipino food so I made sure to grab something to eat every Wednesday. The locals would also show their culture to the visitors by providing heritage shows, dances, and tours. Every Wednesday gave you a sense of Guam pride whether you were from there or not.

If you weren't aware, Guam has many, many strip bars. Most of them are located on Tumon Road, where most of the top class hotels are located at. Tumon Road is a little strip similar to the Las Vegas strip where all the action happens.

Guam's strip joints are known for its wildness and that is an understatement. They encourage the audience to touch the stripper as long as they tip. They will make a member of the audience participate in the show (usually just to ridicule the obnoxious drunk). They encourage the audience to buy the girls drinks in exchange for a little chat. Most of the girls are imported from Korea, Russia, and mainland USA. There are some local girls as well. These girls are not trafficked. They were hired on a short term contract for maybe 6 months and it can be extended. Most of these girls end up going out with a servicemember of the military on the island which seems to be a match made in heaven at first because when the military guy is up to leave for orders to go to his next duty station, the girl's contract is up with the bar.

10. There are three prices at most establishments

There is an unspoken rule about prices on products and services on Guam. There is a tourist price (usually targeted towards the Japanese and Koreans), a military price, and a local price. Most places, the price were the same for everyone, whether you were a tourist, military, or local. Depending on where you are and what you are trying to purchase, the prices can vary.

I didn't realize this until I saw it first hand. If you're at a bar, especially the aforementioned wild strip joints, you might just get in for free or get a five dollar cover charge. If you are a Japanese tourist though, your cover charge can be as high as $50 dollars and your $3 dollar beer will cost you $10 bucks. Another example is apartment hunting. Most places will charge as much as what the military will allow which is up to $1600/mo. If they know you are military, they will charge you on the average $1400 a month. If you happen to have a local girlfriend and she goes apartment shopping, the same room will cost her $1000. These types of separate prices for the range of buyers exist in restaurants, hotels, rentals (auto, sports equipment, etc), and mom and pop stores.

Since half the island is Filipino, and I can pass for a local, I usually got priced at the local level. On occasion though, they could tell I was military and I would get charged a little higher. Luckily, I didn't know how to speak Japanese.

There are two hospitals on Guam. One is called Guam Memorial Hospital. The other is the Naval Hospital. Guam Memorial is for the locals and the Naval Hospital is for the military. As you can guess, the local hospital is not up to par with its military counterpart. Locals and tourists cannot be treated at the Naval Hospital unless there is a referral but referrals are very rare. So what do the locals do if they need better medical treatment that can't be provided by Guam Memorial? They take a trip to the Philippines and get treated at St. Lukes Hospital in Manila. St. Lukes is one of the best hospitals in Southeast Asia. It provides high tech medical treatment and excellent hotel services. You may think it is expensive to fly out of Guam to the Philippines but it actually is not. The three hour flight normally cost between 300 to 500 dollars round trip and once you make it to St. Lukes, the cost of treatment are a fraction of the prices compared to mainland US.

Guam has it flaws but what place doesn't? Guam was a place that help me explore myself. I've met some really great people, local and military, that have changed my life. The island has changed my life. I will always have a special place in my heart for Guam. To me, it was paradise and it was home.