1. Biscayne National Park, Florida. A stone’s throw from metropolitan Miami, Biscayne National Park is a sanctuary that preserves and protects the most northerly coral reef along Florida’s Atlantic coast. Famous for its Elkhorn coral formations, access to the reefs and islands are by concession tour boats that service the national park. There is camping on Boca Chita and Elliott Keys. The best feature is the underwater interpretive snorkel trail. Other well-known salt water snorkeling in Florida can be found at Fort Jefferson in the Dry Tortugas National Park and John Pennekamp Coral Reef State Park in the Florida Keys. The former requires some planning because of its remote location. The latter is the most heavily visited state park in Florida so plan ahead to beat the crowds.

2. Hanauma Bay, Oahu, Hawaii. A collapsed crater provides ideal protection from the notoriously heavy surfs that pound the Hawaiian Islands. This cove is now a marine park/sanctuary and very popular with snorkeling. Hanauma Bay is well-known for the sea turtles that frequent the area’s beautiful coral and clear waters. Arrive early as parking is limited and it is a popular destination.

3. Southern California coast: La Jolla Cove and Laguna Beach La Jolla Cove is an accessible place to snorkel in San Diego and one of the few places along the southern California coast, which is protected from surf. A few caveats include waters that deepen rather close to shore and crowds of people including swimmers and kayakers. Parking can also be hard to find as La Jolla is a big tourist draw. Weekdays are best and avoid holiday weekends especially. Check the tides also. You can expect clear waters close to shore with good views of the kelp forests. Harbor seals frequent the area and sharks are not unknown. Water temperatures are warmest in high summer, but even then a wetsuit is advisable. In Orange County try snorkeling at Divers Cove in Laguna Beach. Access is from Cliff Drive in Heisler Park although the best spot for snorkeling is a block or two up the coast from the park. The park has bathroom facilities and nice overlooks as well as beach access. Kelp beds and the usual fauna seen along coastal southern California. Divers Cove is popular with scuba divers who can walk right into the dive from the beach.

4. Lovers Cove and Pebbly Beach, Catalina Island, California. Within walking distance of Avalon, the main town on the island, are located both spots which are popular with snorkelers. Look out for the Garibaldi fish a beautiful bright orange denizen that is the state marine fish of California. Sea bass are also present. The fish can get aggressive, especially if you have food and are known to bite if they sense feeding is coming. Clear waters and kelp forests are also an extra. Great White sharks are rare but not unheard of on this side of the island. The water is relatively cold at its warmest in high summer: low to mid seventies.

5. Wekiwa Springs State Park and Blue Spring State Park, Florida: Both are located in north central Florida, or greater Orlando, within twenty miles of each other and provide excellent opportunities to explore the crystal clear fresh water springs found throughout Florida. Since both are located in state parks there are facilities such as trails, parking, and changing rooms. Wekiwa Springs is better for the beginner because it has shallower waters and is almost totally enclosed by concrete walls. Blue Spring requires a bit more swimming and the water depth is greater. The settings of both are beautiful amongst subtropical hammocks. Blue Spring is also frequented by manatees during the winter months and swimming is restricted during their presence. The water that comes from the springs is at a constant in the low seventies so a hot summer days is a great time to go.

6. Isla Grande, Panama: Isla Grande takes some time to get. Located on the Caribbean, or Atlantic, side of Panama, it requires about a two hour drive from Colon through rural roads. A stop at the old colonial castillo in Portobelo is an interesting side trip and along the road a few miles from the blink-and-you-miss-it village jetty. Once you arrive in the village, take the five-minute ferry to the island. Ferry boat prices are negotiable. The waters are beautiful with an array of tropical marine fish that reside in the coral reef. More ambitious divers and snorkelers should head to the San Blas Islands in Panama, a remote archipelago that is only now starting to draw more tourists. Transportation by plane from Panama City is recommended as there are few roads in the area.

7. Kudaka-jima, Okinawa, Japan. Probably the best waters for diving and snorkeling north of the Philippines are found in Okinawa generally, and the Kerama Islands specifically. Kudaka-jima is located on the Pacific side of Okinawa near its southeast tip. The island is considered a sacred Shinto site but this doesn’t stop the occasional tourists, who travel to the sleepy island which is mainly populated by farmers. The best kept secret is a small beach opposite the ferry terminal on the other side of the concrete sea-wall. Excellent snorkeling is within feet of the shore as the depth of the clear water quickly reaches thirty feet. Access to Kudaka is by a 1 hour ferry ride from the Chinen marina. For those who have more time, the Keramas are a small group of about thirty islands located about 15 miles from the main island of Okinawa in the East China Sea. The waters are clear and the islands are ringed by coral formations. Huge schools of fish are common and in June breeding sea turtles frequent the water between Zamami-jima and Tokashiki-jima. Other commonly sighted species include angel fish, butterfly fish, wrass, trigger fish, clown fish and the potentially dangerous sea snake as well as the lionfish and sea wasp. Access is by regularly scheduled ferries from Naha, Okinawa. Charter tours are also available.

8. Tunka Abdel Ramen National Park, Sabah (Borneo), Malaysia. A group of islands off the coast of Kota Kinabalu, Malaysia gives plenty of opportunities for beach combing, snorkeling, and diving. While it probably doesn’t compare to Sipidan on the east coast of Sabah, these islands are accessible by a fifteen minute ferry ride from the well-visited pier in Kota Kinabalu. Ferry rides are negotiable so try to bargain down the first quote. Of all the islands, arguably Sapi is the best for snorkelers. It has a protected beach that looks out to Pulua Gaya, beautiful coral and denizens such as sting ray which can be spotted here. Annoyances include the monkeys that frequent the beach’s edge looking for handouts or rifle through unattended bags. Equipment can be rented on the island. The other islands include Mamutik, Manukan, and Gaya. Gaya has limited facilities but a great beach for snorkeling if you don’t mind a twenty minute walk through the jungle.

9. Isla Ixtapa, Mexico. A protected cove on Mexico’s Pacific shore makes it one of the few places to snorkel on this side of the country with the exception of Baja. Coral formations and tropical marine fish are abundant. Equipment can be rented on the island which requires a ferry ride of about ten minutes. It’s also less crowded than most beaches in the area.

10. Long Island, Bahamas. Dean’s Blue Hole on Long Island is reputed to the world’s deepest at 660’. Essentially it’s the remnants of a cave system whose roof collapsed and has since been inundated by rising ocean levels. Today the surface is slightly below sea level. This has made it a phenomenal place to snorkel and one can snorkel the entire rim within feet of the shore as well as its great depths. It is also protected from the ocean by a shallow sandbar. 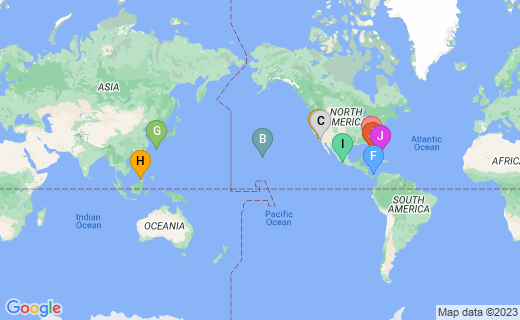