CJ Stone is an author and columnist, with seven books to his credit. He lives in Whitstable and currently writes for the Whitstable Gazette.

Tenerife is a very popular holiday destination in the Canary Islands. Tourists flock to its resorts in the south of the island where they enjoy its beaches, bars and all-year sunshine. But, staying put in Los Cristianos and Playa de Las Américas, so many of them miss out on the magic of the rest of the island. The answer is to jump on a Tenerife bus.

The Tenerife TITSA bus company - www.titsa.com - has a range of bright green and easily spotted buses that go to nearly every location on the island. They come with the slogan “Tenerife amable” (Friendly Tenerife) emblazoned on their sides, and indeed the island lives up to this description. The people are friendly; the climate is excellent, and the countryside breathtaking.

TITSA buses offer a great discount on fares too, because if you buy a Bonobus (usually shortened to “Bono”) you get 50% discount on all long distance fares. This represents a big saving if you want to travel around the island. Bono tickets are sold at main bus stations and from a range of shops and kiosks around the island. Look out for the signs. They are either €12 or €30 and a machine calculates and deducts the fare after you tell the driver where you want to go. That way you get a running record of how much you have left on your card. It is possible to go right around Tenerife with just one Bono. See Tenerife for €12!

The Las Américas bus station in the south is a great place to begin your exploration of Tenerife with services from there to many parts of the island. Pick up your complimentary free map and bus timetable while you are there.

One recommended route is bus number 460 from Las Américas to Icod de los Vinos in the north. Icod is famous for its ancient Dragon Tree (Dracaena draco) said to be between 1,000 and 3,000-years-old. It is worth taking a trip to Icod just to see this gnarled relic of the age of the Dinosaur standing proudly in its own little park – Parque del Drago - and marvel at how much human history must have passed beneath its branches.

There are also two very pretty Spanish-style squares in the town, with a grove of purple-blue-flowered Jacaranda trees, a church with a museum of sacred art, with a massive Mexican silver filigree cross, a traditional bandstand and café area, and a huge Australian Banyan tree that is perhaps almost as impressive as the Dragon Tree.

The bus journey takes 90 minutes, and costs around €3.50 with a Bono. It takes you up from the hot and dry southern resorts, through mountain villages and towns into the lush, green north. Make sure you get a window seat. Along your journey you will see views down over the vast countryside to the coast below. You will see high craggy mountains, sweeping valleys and drops, and magnificent Canary Pine forests, with the majestic Mt Teide – the dormant volcano at the heart of the island - overlooking it all. In winter Teide is often capped with gleaming snow.

When you arrive in Icod you have a choice. You could stay and visit the mighty Drago Milenario (the thousand year-old Dragon), or you might want to take another bus and go to Garachico. This is just a 10 minute bus journey away. You will also find another benefit of your Bono ticket at this point: connecting journeys are often free of charge. So for no extra cost you can see the volcanic lava pools on the beach where many people enjoy bathing, or wander around the cobblestone streets of this charming Tenerife town.

Tenerife is the largest of the seven Canary Islands. British tourists make up the bulk of visitors, with more than 1.5 million visiting each year. Most stay in the popular resorts in the south of the Island, drawn by the sunshine and year-round warm climate, with average temperatures of 20-22 degrees centigrade in winter and 26-28c in summer.

Another highly recommended bus journey is up to Mt Teide. You can catch the bus from Playa de las Américas and Los Cristianos in the south (number 342) or Puerto de la Cruz in the north (348). There is only one bus a day and it leaves Las Américas at 9.15 in the morning and comes back at 4 in the afternoon. It costs around €4.50 one way, which is a lot cheaper than the excursion buses, which also only give you a short time on the mountain. With a TITSA bus you get dropped at the Tourist Centre around 11.30 am and have until pick up time in the afternoon –much better value!

The journey is spectacular - the bus grinding up and up along winding roads through a forest often wreathed in cloud, and then down into the bowl of the crater itself. Mt Teide is actually the highest mountain in Spain, and at 3,178m is the third highest volcano in the world.

It is like visiting another world with the miles and miles of weird volcanic rock formations that really do make it look more like Mars or the Moon. It is not surprising that Mt Teide was used as a film location for the sci-fi movie Barbarella.

Over the road from the tourist centre are the Roques de García – a group of rock columns with bizarre shapes carved out by time and erosion. To the south of these rocks lies the Llano de Ucanca, a vast plain that looks more like a sandy beach stranded in the midst of this mountain landscape.

Higher than the tourist centre, and another place you can get off the bus, is the Teleférico cable-car. From here you can be whisked to within 163m of the summit.

To get any higher you will need a special permit. The extreme conditions at the top of the mountain provides a unique habitat for endemic flora and fauna found nowhere else in the world. It is a protected environment and a UNESCO World Heritage site – and about as far from the bars and beaches of the Tenerife’s tourist resorts as you could hope to find.

More about Tenerife by Steven Andrews 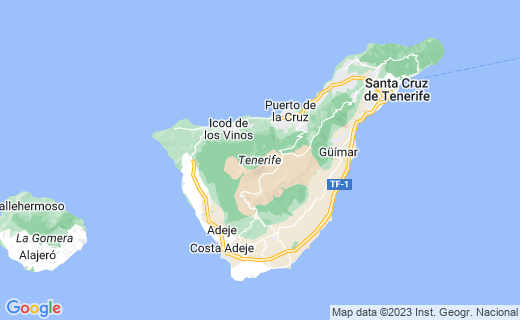