What to see on a Day Trip to Fontainebleau.

A die-hard traveler and regular visitor to Europe, Will Apse enjoys providing context for the great attractions of the continent.

Fontainebleau is one of the great palaces of Europe and occupies a special place in the French mind as a place of history, culture and beauty. It is most famous outside France as Napoleon's lair and the place where he made his emotional farewell to his ‘Grande Armee’ (great Army) before going into exile after his defeats in Russia.

The surrounding countryside is almost as significant as the Palace itself. The unspoilt beauty of the Forest of Fontainebleau attracted artists like Corot and Claude Monet in the nineteenth century and is one of the birthplaces of impressionism. In 1861, as a measure of its national importance, it was declared a nature reserve- the first in the world.

A visit to the Palace and a walk- or hired bike ride-in the forest make for one of the great day trips from Paris. Unlike Versailles, the castle and grounds are rarely so crowded that the spirit of the buildings and the countryside are lost. It is a great place for a picnic and a chance to relax after the hectic buzz of Paris.

In 1584 Francois I rebuilt a small and run down hunting lodge for his mistress, the Duchess d'Etampes. The result was a palace of such a fabulous and fabled history that it has given its name to hotels and perfumes, movies and casinos remaining as a symbol of refinement and opulence through revolutions and wars.

Francois I was a contemporary of Suleiman the Magnificent of the Ottoman Empire, King Henry VIII of England and the Holy Roman Emperor Charles V. When he ascended the throne at the age of 24, he became the first true renaissance monarch of France and wanted a palace at Fontainebleau to rival the great palaces of Italy and the East. It would be a "new Rome" with balls, masques, and music on a grand scale.

A new combination of sculpture, metalwork, stucco and woodwork was evolved by Italian artists Niccoli dell' Abbate, Primaticcio and Rosso and became known as the"Fontainebleau style". Hundreds of fine paintings were also commissioned for Fontainebleau. Although many now hang in the Louvre- including the Mona Lisa, personally delivered to Fontainebleau by Leonardo Da Vinci- stunning wall paintings remain.

After Francois 1, the life of the royal family changed from simply making war and hunting to patronage of the arts and the pursuit of beauty. Of course, making war- one of the first duties of any European monarch- never completely lost its appeal and hunting remained a great pastime at Fontainebleau for many centuries.

Unlike Versailles, which was built almost all in one period, the Castle of Fontainebleau evolved over several centuries and each century has left its mark making it one of the best places to experience the great depth of French history. Napoleon added a lasting layer, remodelling many of the interiors. He also left behind the hat that he wore on his return from exile in Elba, a lock of his hair, the little table on which he signed his abdication in 1814, and the camp bed he used on many military campaigns.

His 'appartements' can only be visited with a guide but you are free to wander most the building on your own.

Napoleon's speech at Fontainebleau before exile in Elba.

The paintings created for the castle of Fontainebleau are as important as the building iself. Yet, it was the forests that provided inspiration for a new generation of artists in the nineteenth century, rebelling against the restrictive tastes of the French Academy .

The distinctive terrain — rich, ancient woodland, striking rock formations, and lonely plateaus — provided a wealth of material for painters and, later, for photographers too. Painters such as Corot, Millet, Rousseau, and Daumier used the forest to perfect a new approach to naturalism and in the process created a school of art called the Barizon School, after the small town in the forest they used as a base. Later Monet, Renoir and Sisley, amongst others, used the forest to develop impressionism.

Many 20th Century painting schools owe a debt to the traditions developed here.

The stange boulders that fill the woods have become a favourite place for climbers, leapers and fallers. See video.

Eating in Fontainebleau or nearby Barbizon

Within the town of Fontainebleau is Le Table des Marechaux (in the Hotel Napoleon); 9 rue Grande. Around 40$ for a fine 3 course meal.

Barbizon, once a famous artists colony, has many restaurants and brasseries as well as antique shops and boutiques. 'Relais de Barbizon', 2 Avenue Charles-de-Gaulle is recommended with menus from 20 dollars up to 60 dollars per person.

Paris to Fontainebleau by Train

SNCF trains leave the Gare de Lyons every hour on the Montargie line. Journey time is between 35 and 60 minutes and costs around $10 person. Fontainebleau Avon station is just outside the town of Avon. A bus runs to the Chateau every ten to fifteen minutes on weekdays, every thirty minutes on weekends.

SNCF trains and all inclusive tickets for Daytrips from Paris

Paris to Fontainebleau by Car

Take the A6 South of Paris. For the first 9km follow signs for Nantes, Bordeaux, Orly, Lyons. Continue south following signs for Lyon Chilly and Mazarin for another 35 kilometres. Then Take the N 37 Exit towards Fontainebleau and Montargis Par Fontainebleau. After 7km there is a sign for the N7. Follw the N7 for 6 km and exit at Fontainebleau.

There are leaflets in travel shops and hotels offering tours to many destinations in the Ile de France (the area around Paris). 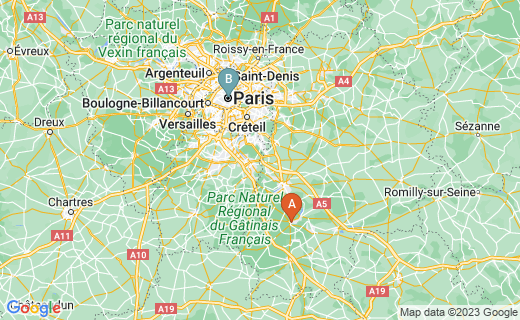