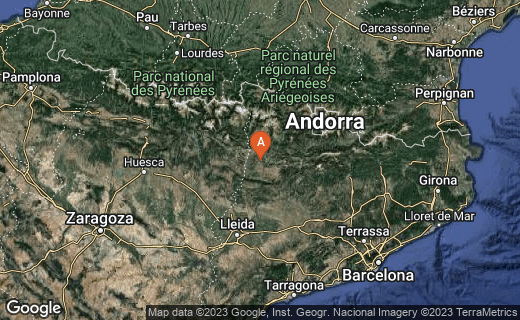 In certain areas of the Catalonia Pyrenees you can discover whole villages that have been left to their fate, still intact, abandoned yet preserved. Empty shells where communities once lived and thrived.

One such village is El Mas de Balust, a collection of stone houses and farmsteads roughly 1000m above the Tremp valley. It is now completely at the mercy of mother nature but has remained remarkably well preserved. The church for example still has its chestnut wood door, upstairs balcony and painted blue and cream altar. A large farmhouse holds iron bedsteads and cupboards still have items inside, as though ready for use. It can feel a little eerie up there by yourself.

Yet, this is fascinating territory to explore because it's both disturbing and exciting. You don't have to know why no one lives here anymore, you can just imagine. Tyrant landlord? The water dried up? The patriarch died? Epidemic? Murders? Civil war family strife? The money ran out? The call of Barcelona just too strong?

I know, it's not everybody's idea of a holiday, to climb up into the clean air of the wild Pyrenees, get close to vultures and other raptors and visit half collapsed villages. Most sane people would want to spend long lazy hours on the Costa del Meresme, soaking up the rays, sipping their chilled Estrellas or fancy iced liquers. For me that equates to a whole lot of boredom. I'd much rather head off into el campo alta for some alternative culture.

There is a huge farmhouse with an ancient olive tree outside. Its outer wall backs onto a sheer barranco, ravine. It's possible to explore the interior of this incredible old building and get a feel for the kind of people who lived, worked and died here. The last inhabitants must have left in a hurry. They forgot to take their pine table and one or two picture frames. On a shelf are two enamel plates and a wooden spoon.This is like a scene out of one of those disaster movies we love to go watch. What could have gone so wrong?

I go scrambling up into the half collapsed rooms to explore, negotiating a stout cross beam then some rough stone work before climbing up to what is the second floor. There are two large bedrooms and two small ones. These all have beautiful little carved balconies facing out onto a courtyard, with views down to the valley and up onto the crags. Once upon a time a family would have gathered here to greet the new morning blue. Wonder what that last time was like?

The church door is open. It's an amazing door made out of local chestnut, you can tell by the rich grain and colour. Inside, the altar is intact, paint and plaster starting to fade, a wooden balcony for the choir is reached by a beautiful set of steps.

Then this tiny black shoe made of leather turns up, decorated with white trim thread. Despite the years of soil inside it is still exquisite, hand crafted with dozens of tacks. What dark haired senorita stepped lightly down from the church step I wonder? Were these the last steps ever to fall on the stones of El Mas de Balust?

The griffon vultures are spiralling overhead. Dozens of them. Although it's still light I think I'll move on down the narrow track that takes me up to Santa Engracia, another mountain village perched on a sloping rock - still thankfully very much inhabited. Time to get back to my bed and breakfast. In an hour the wild boar will be out.

but the girl, she is still here

looking down as the last family

disappears into the evergreen oaks.

Everything has a new silence

the girl has come to love.

The orange mountain takes over

and the skin of time that people

made smooth, roughens in the wind.

Vultures eat the sun to flesh out the rock.

The girl forms from the black shoe,