John is a retired high school/college English teacher, world traveler, and sports enthusiast. He has visited about 40 countries.

I cannot remember exactly when I discovered Anne Frank’s life and fate in her Diary, but it was sometime in my teens, I am sure. It must have had some connection to a reading assignment that I was doing for my high school English class.

This would have been in the middle 1950’s, just ove

r a decade since the end of World War II and Anne Frank’s life. Until then, the war had had no great meaning to. When I began reading Ann Frank’s Diary, very early in my reading, I found Anne talking about living in Amsterdam after the family’s move from Germany as the Nazi menace was being made clear to the Jews of Deutschland that they were in real danger. What caught my personal attention was Anne’s mentioning that she had gone to see a Rin Tin Tin movie. I attended a great many movies in my childhood, including several with Rin Tin Tin, a German Shepherd dog, being the star. It may seem silly to some readers, but I felt that, since I might have have actually seen a movie that Anne had also seen, I felt closer to her than I had before reading that passage in the diary.

Anne’s life came alive to me in that moment. Then I found out that she had been born only ten years before me. She was ten when I was born, and I was six when she died. Her life and story were not in the historical past of my life. The were in my lifetime, almost part of my life.

The Diary itself, and dramatic productions which I have experienced based on it, have had a deep and lasting effect on me. So have my visits to the Anne Frank House in Amsterdam. There are many sites in that city which I have enjoyed: just walking the canals, the Riksmuseum with its Rembrandts and the Westerkirk, where Rembrandt was buried for a time, and the Van Gogh Museum with its sunflowers and so many other wonderful paintings, were just three. These as well as other sights in the city made it a most interesting place to visit for me.

However, it is the Frank House that was the most meaningful to me. When I was first there in 1984, it seemed to me that there was much clutter and litter which apparently had have been left by the Franks and their fellow Jews who were there for a little over two years, beginning in 1942,. The place looked much like the people who had lived there had just gone out for a while and might return at any time When I returned several years later, the clutter had been removed. Anne’s room in the photo below were still on her bedroom walls under a protective plastic covering as they had been the first time that I visited..

The two small pictures in the lower left corner are the English princesses Elizabeth and Margaret. Above them and to the right is a picture the American film actress, Myrna Loy.

A couple of decades later when I was there again, the whole museum building downstairs had been changed greatly by more security measures to protect it from possible vandalism, and an updated museum, gave a great deal of added information from when I had been there before.

Anne’s pictures were still on the wall of her room and the feeling meant that one of the truly important people of my lifetime had really been there, and that, to me, her spirit seemed to remain in that place. That made their hiding place to be close to being a sacred one to me.

Map of Amsterdam; It can be easily noted that on the map, the Frank annex is pretty much in the center of the city center of Amsterdam. 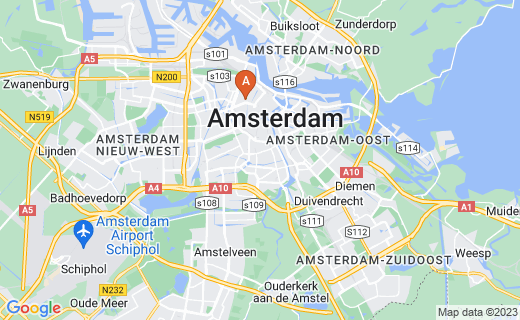 Anne's Diary in the Anne Frank Museum in Amsterdam

"Because we're Jewish, my father immigrated to Holland in 1933, where he became the managing director of the Dutch Opetka Company, which manufactures; products use in making jam."

This quotation shows that the Frank family knew a full nine years before they went into hiding that, as Jews, the were in danger from the Nazis. The 'house' in which the Franks and others lived in hiding was more properly an 'annex' at the back of the Opetka Company, hidden by a bookcase which could be swung open to let the people who worked in the company access to the attic annex. [See photo below]

"I soothe my conscience now with the thought that it is better for hard words to be on paper than that Mummy should carry them in her heart."

The diary, especially a later edition, reveals a sharp struggle between Anne and her mother, it seems to me essentially like that of average parents and children, when children must find their own way in their world and parents may not be quite ready for that separation, or at least want to continue to have substantial influence on the child, when the child wants freedom from the parent's restraint. This quote shows Anne's great love for her mother under the most trying of circumstances.

"How wonderful it is that nobody need to wait a single moment before starting to improve the world."

This quote and the one to follow both show how much optimism Anne retained, even when she and the people with her might be carried away to their deaths at any time, which is what happened to all of them except her father.

"Despite everything, I believe that people are really good at heart."

This quotation expresses Anne's optimism and her belief that, somehow, there was enough goodness in the heart of people in her world that things might end well for her. It is a great tragedy that this belief did not end with her living a long life, from what we see of her character and optimism in the Diary as a writer, she surely would have made a greater contribution to our western culture than even her diary, but her death prevented that.

Quotations are from the website Brainy Quotes, "Anne Frank Quotes"

The Frank family entered the third floor annex behind Mr. Frank's pectin factory on from 1942 to 1944. In August 1944 the family and four other people hid in the annex behind a specially constructed bookcase which could be used to close the stairway to the annex apartment and opened to let supporters of the group take them food and other supplies and closed to hide the stairway.

When Anne and her sister, Margot, were removed from the annex along with the other people there, they were first transported to Auschwitz, then to Bergen-Belsen. It is not definite when the two girls died, but extensive research has determined that it was probably during a typhus epidemic at the death camp in February of 1945. The war ended in September of 1945.

General information taken from my visits to the Frank House and from Wikipedia article, "Anne Frank."

Photos and other illustrations came from copyright free services.or my personal photos.