The Balearic Islands of Spain

Idyllic islands nestled together in the western Mediterranean sea are the Balearic Islands of Spain. All of the islands, major ones and minor ones, are islands of paradise. The weather is temperate and summer weather all year round with temperatures reaching no higher than approximately 86 degrees F (24 degrees C). These islands are the tourist destinations of many living on the European continent.

The Balearic Islands, Islas Baleares in Spanish, are an archipelago of Spain. They are located off the eastern coast of the Iberian Peninsula just east of the Catalonian ( Catalan) region of Spain. They are easily accessible by plane, cruise ship or private sail boat or yacht.

The four largest islands are:

These four major islands are the major tourist attractions and destinations of people from all over the world to lay on the idyllic beaches found on all four islands. There are also many tiny islands in this archipelago and one of note is Cabrera which is the location of a popular national park, Parc Nacional de l'Arxipelag de Cabrera.

Each island has it's own towns and historical sections, but the capital city of the Balearic Islands is Palma de Mallorca on the island of Mallorca, the largest of the islands. It is a busy,bustling capital city but one can escape to the one of the beautiful beaches on the coastlines of the island.

The languages spoken on the islands are Spanish, which is the official language of the Balearic Islands, and Catalan, which is spoken by the natives as their first language. Signs all over the islands are in Spanish and Catalan. This is because the islands sit right off the coast of the region of Catalan in Spain.

The Balearic islands form an autonomous community and its own province of Spain and the Statute of Autonomy declares the Belearic Islands as one nationality of Spain. Figure that one out.

The islands were once known as the Gymnesiae islands, Gymnesiae being the Greek word for naked, because early inhabitants of the island often were nude because of the year found warm climate. Today, nude beaches are found among all four islands, however when off the beach, people are fully clothed.

There are many legends told today of the ancient peoples of the islands living nude on the islands until conquered by the Phoenicians. Then, they became clothed people.

Greek and Roman writers of the period believed that Balearic came from the ancient peoples who were skilled as slingers, called baleareis, which in Greek means to launch. The ancient peoples of this islands, used sling shots to defend their islands from invaders.

Also, some historians believe that the name of the islands is Phoenician as the root of the word, 'bal' is Phoenician and during ancient times the inhabitants believed in the sacred god, BAAL.

During Roman rule of the islands, the Romans named them Hispania Balearica and this name stuck through time.

The two largest islands, Mallorca and Menorca, have excellent harbors and very fertile land that produces much wine, olive oil, cattle, and rabbits. Interestingly, these islands are also free from all venomous reptiles. And, snails, cavaticae, bred in caves on the islands, was once a delicacy of the Romans who owned the islands for a time.

Snails remain part of the cuisine found on the Balearic Islands. Today, those living on the islands follow a Catalan, Spanish, and Mediterranean diet which is quite healthy. They eat bread, cheese, wine, pork and seafood. Sabrassada is a local pork sausage made on the islands. Lobster stew from Menorca is a favorite on the islands. And mayonnaise is said to have originated from Menorcan city of Mao which also produces its own town cheese.

Local pasteries consumed are Ensaimada, a type of sweet roll, flao and coca. Although the islands have a shared cuisine, each island has its own beauty, cities and history,

As mentioned before, Mallorca is the largest of the islands and the capital city of all the islands, Palma, is located on this island. Besides the gorgeous beaches along the coastlines, there is much to see and do in this busy capital city.

One of the main focal points in Palma is La Seu, the huge, vast cathedral designed by Antoni Gaudi and decorated inside by contemporary artist Miquel Barcelo. It was constructed from 1300-1601 and is the major architectural landmark on the island.

Opposite the cathedral rests the Palau de l'Almudaina which was originally an Islamic fort but has been converted to a residence at the end of the 13th century for the Mallorcan monarchs. It is still used for official functions today whenever present King Juan Carlos visits the island.

The Real Cartiya de Valldemossa is a grand monastery that has been turned into rental accommodations for natives and tourists after the monks were expelled ages ago.

The Castillo de Bellver, is a 14th century circular castle with a unique round tower that sits atop a hill. The panoramic view of Palma and Mallorca are spectacular from here. James II of Spain ordered it built. He was the son of James I of Aragon who conquered the Balearic Islands for Spain in 1229.

For those that like wildlife and hiking, there is the Parc Natural de S'Albufera which has protected wetlands located south of Port d'Alcudia on the island. Here is a birdwatcher's paradise with more than 300 different species of birds spotted year round.

Writer Robert Graves had a house built here on Mallorca in 1932, Casa Robert Graves, and seeing it gives interesting insight into his life and writings. It was an idyllic place to write.

And, not to be missed, is Es Baluad, a contemporary art gallery that houses some of the works of Joan Miro, Pablo Picasso, and Miquel Barcelo, all important modern Spanish artists.

Mallorca is the popular vacation destination for many Europeans from Germany, Ireland, Poland, the Netherlands, Scandinavia and the UK. Also, this is the island where the Spanish Royal family vacations.

Of course, the best places on Mallorca are the resorts and beaches which offer tranquility and clear, transparent waters, and a complete Spanish paradise.

The beauty of the Island of Mallorca. 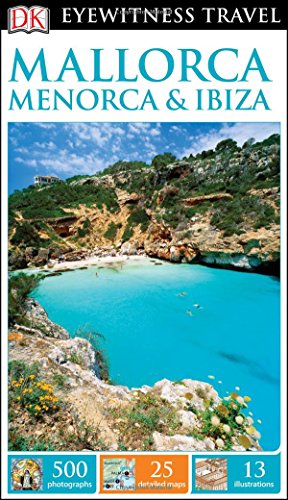 This island is a more natural setting and because not as many tourists visit here, the beaches are untouched and there are lovely coves and ravines to discover in the hills. There are also rolling hills and dry stone walls to see from ages back.

Menorca has a wetter climate and is a few degrees cooler than the other islands.

Es Mercadal is the oldest village on the island and a daily market has been held there since the 1300's. It is a charming villiage to see.

Quarries and stone cutting was famous on this island for centuries and relics from this older industry are scattered around the island.

This island is full of condos, apartments and resorts to stay out of the way of the other busy islands of Mallorca and Ibiza. If you want a vacation away from the maddening crown, Menorca is the island to retreat to.

Sailboating, any kind of boating, fishing, snorkeling, and scuba diving are the activities available on the island which has a more natural island setting and is quieter and not so congested with tourists.

The quiet island of Menorca

Ibiza - what can I say about Ibiza? In the last twenty years this island has become the hot spot, party island for the international jet set. It is literally endless partying in the Mediterranean at the macro clubs that dot the streets of Ibiza City, the capital city of the island on the south shore, and Sant Antoni located at the west end of the island.

Here are the idyllic beaches, many nude beaches, and this is the hedonistic island of the four.
The typical day for the young jet set that descends here is waking at noon, afternoon on the beaches or doing what-not, early evening naps, late night clubbing and disco sunrises. Then of course, the night clubbers crash at a beach side cafe for breakfast or hangover aid to start the cycle all over again.

This is the wild island and anything goes here. The nightclubs are well-known here such as:

Do the names give you any idea of what the night clubs are like? Here is where electronic music originated and famous DJ's from all over the world come here to perform especially during the summer months when this island is a hoard of young people.

This island is all about the youth culture, so if you want a quiet, relaxed get-a-way, this is NOT the island to come to.

Which Balearic Island do you want to visit?

Formentera is next to Ibiza and considered Ibiza's sister island. However, this is a quieter island like Menorca. The international jet set stays on Ibiza and so this island is nearly empty with only a population of seven thousand.

It is flat, sandy and with unspoiled beaches. The beaches have clean sand and transparent, clear water. Because it is flat, It is perfect fro cycling, walking, snorkeling and sailing. It also has historical attractions, museums, castles, churches and art galleries.

The tourist season is the months of July and August and huge numbers of tourists flock this island, mostly Italians. So many Italians vacation here during these months that Italian is the third language on the island after Spanish and Catalan.

Outside the tourist season this island is simplicity and back to nature. Sailboats and yachts quietly come in and out of the ports, islets and inlets without a lot of traffic. This is the idyllic, paradise island like Menorca.

The Balearic Islands offer a bit of something for everyone. If you like the bustling and busy capital city, and also beautiful beaches, then Palma, Mallorca is your vacation destination.

If you are a young jet setter or person hoping to meet the international set and like night clubbing until you drop, then Ibiza is the place for you. Lay out on the beach in the afternoon to rest up for the all night fun in the cities of Ibiza Town and Sant Antoni.

And, if you want a quiet, tranquil, relaxing vacation or want to sail the Mediterranean without a lot of traffic in the way, then Menorca or Formentera is your place to vacation.

And, don't forget, there are lesser, small islands that make up part of the Balearic Islands where there are more natives than tourists found on these islands. You have many islands to choose from for a paradise vacation.