Eric Standridge is a historian and author who focuses on Oklahoma's history, with an emphasis on LeFlore County and Poteau.

In Oklahoma, Skateboarding is alive and well. There are skateparks spread all across the state, from the massive Mat Hoffman Action Sports Park of Oklahoma City to the hundreds of community skateparks found in almost every major town and city.

Skateparks, in general, have a relatively short history. The first skateboards from the 1950s were more like scooters. Skateboarding was born after a group of people got the idea to remove the push bar of these "scooters". Still, it wasn't until the 1960s that skate boarding parks, or skateparks, became common. The rising popularity of these skateparks lead to the first recognized skateboarding contest held in Hermosa Beach, California in 1963.

By the 1970s skateboarding experienced a growth stage that was unprecedented previously. Across the country, new concrete skateparks were being constructed at a rapid pace. For the first time in skateboarding history, empty swimming pools and cylindrical pipes were exploited as terrain for the first time.

During the 1990s, the skating industry had become huge. Numerous skateparks were appearing in Oklahoma, and people were flocking to them in droves. The many different ramps, pipes and bowls present at these parks have led to an even greater growth in the sport.

In November, 2011, one of the most well-constructed and designed skateparks opened in Poteau, Oklahoma. Poteau is located in LeFlore County, about 15 minutes from Fort Smith, Arkansas.

Vision behind the Skatepark

When Lisa Fabian first came up with the idea of a Skatepark in Poteau, her vision was to bring more diversified outdoor activities to the area's youth. The park creates a positive atmosphere where the area's youth can gather in order to improve their skills in one of today's most competitive sports.

Construction of Poteau's Skatepark on Broadway

Poteau's Skatepark on Broadway was designed with serious skaters in mind. The ramps are smooth, the concrete is solid, and the rails stout.

Some of the most important elements of the Skatepark on Broadway are those that can't be seen. Even before construction of the park began, special attention was given to the soil and bedrock that lies below the park. Using special techniques, the construction team compacted and graded the ground to ensure that, once the concrete was poured, the park would never have any cracks associated with the ground settling.

When it came time to pour the concrete, an additional measure was taken. Large concrete piers that reach all the way down to the solid bedrock were constructed in order to help stabilize and support the park.

A thick layer of concrete was then poured as the foundation of the park. Slowly, the ramps, rails, and stairs began to take shape. These were all reinforced with rebarb steel frames, which ensures both the stability of the obstacles and the safety of the skater.

A specialized concrete mixture was used that not only creates a smooth surface, but also ensures good traction. In addition, all of the major ramps and rails are finished with the highest quality steel. This ensures that the concrete will not chip even after years of wear.

The Goal of the Nashoba Youth Foundation (NYF) is to provide safe and healthy recreational activities and lifestyle choices through skateparks and other diversified outdoor recreation and economic growth in rural low income native communities.

Built by Native Skateparks, with funding provided through grants from the Tony Hawk Foundation, the Nashoba Youth Foundation, and the City of Poteau, Poteau's Skatepark Off Broadway is one of the best designed skateparks in eastern Oklahoma.

The concept for bringing the skatepark to Poteau, Oklahoma was first conceived by Lisa Fabian. After countless hours of grant writing and research, Fabian was able to raise the funds needed to construct Native Oklahoma's most impressive skatepark. Before plans for the park had been laid, she conducted a month-long online survey in order to determine what features were most popular with the skateboarding population in the area.

Both the bowl and the distinctive street features create a smooth flow, enabling the skater to move from one trick right into another without losing momentum. The custom built concrete facility is completely unique and offers new and exciting challenges around every curve. Considered a flow park, the Skatepark on Broadway combines elements of both bowl parks and street plazas.

Even though Poteau's skatepark is still young, it has still attracted a lot of attention. On average, there are at least 280 people visiting the park a week. Generally, the park can handle around 40 skaters at a time. The skaters that frequent this park range from the beginner to those of intermediate skill.

Future plans include a massive expansion, which could double the park's size. Several new features would be added, including sidewalks and landscaping. In addition, there are plans underway to create state and country wide competitions, such as the Oklahoma Slam.

Since Poteau's Skatepark on Broadway is an overall 12,000 square feet, it is large enough to hold major competitions. The Oklahoma Slam, first held in March 2012, featured skaters from all over North America. Skaters from New Mexico and even as far away as Canada came to compete in the competition.

The Oklahoma Slam was the first skating competition ever held in the state, and was an overwhelming success. Bill Danforth, Todd Harder, Short Bus, and Native Boardz were some of the sponsors of the event. They also provided valuable time and resources in order to ensure the Oklahoma Slam was an event to remember.

Tricks ranging from the standard Ollie to the more advanced Varial Kick Flip were common. Noseslides, Grinds, Kickflips, and Shove-its were all graded on precision and flow.

During the 2012 event, skating legend Bill Danforth along with the Short Bus Crew made a special trip to Poteau to witness the events.

As the event grows larger, the Oklahoma Slam can expect to see more technical tricks, greater air, and most astounding street tricks than has ever been seen in this part of the country.

Images from Poteau's Off Broadway Skatepark in Oklahoma Location of Poteau's Skatepark off Broadway 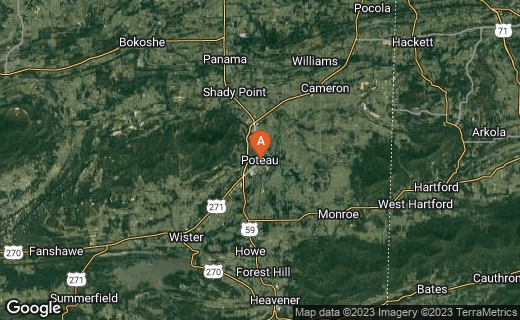 The Skatepark off Broadway is located off the highway, close to the heart of downtown Poteau.