Where is Sherwod Forest? It lies close to the city of Nottingham, extending up to the Town of Worksop 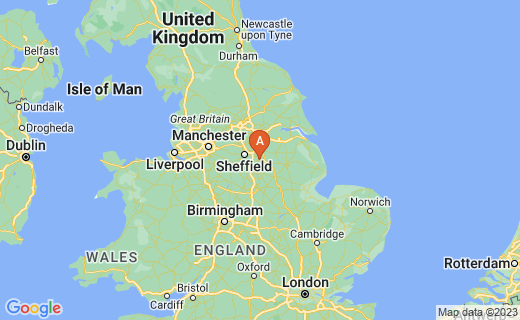 On the Edge of Sherwood Forest

Sherwood Forest is in the county of Nottinghamshire in the north of England, roughly 150 miles north of London. It was once extensive but is now reduced to a few precious pockets of ancient woodland. Ancient, venerable oak trees are still a speciality of the area.

The legendary outlaw Robin Hood (Robyn Hod, Robyn Hode) is said to have lived in this forest, along with his gang 'of merrie men.' In a time of corruption, disloyalty and chaos in England during the 13th and 14th centuries, Robin was the hero who helped the poor by robbing the rich and distributing their wealth. This was a revolutionary method of on-the-spot taxation.

Little wonder that his name has lived on in the folklore of England.

Robin was a hero to me as a boy. Every walk into the woods, every tree climb, every fire we lit seemed to involve Robin Hood, the great champion of the poor and the deadly rival of the Sheriff of Nottingham, evil King John's right hand man.

It seems strange to relate now but back in the 1950s Robin Hood was closely associated with all things communist! It's true. I guess it was to do with the way Robin acquired capital (he stole from wealthy bishops and landowners) and distributed his new found cash to the needy. These days, with communism an endangered species, he's back to his rightful status as rogue-hero, archer supreme, spokesman of the oppressed.

Worksop is the perfect town to set up base if you want to explore Sherwood Forest and surrounds. You'll get to experience the real folk of the woods, the markets, the pubs and the farms. Tiny villages and hamlets are within walking distance and if you fancy a longer hike across country there are well marked trails that will take you into thick deep English deciduous forest and beyond.

Spend some quiet time in deeper woodland and you'll pick up the faint aura of Robin Hood again and his merry men, feasting on the King's venison and slurping down home made mead and ale.

England has an enormous wealth of natural beauty, from the famous white cliffs of Dover in the south to the glorious craggy hills and deep lakes of the Lake District in the north west. In the east are wide skies, estuaries and open fenland, to the south west rolling farmlands sown together by miles of hedgerows and copse.

If you ever get to venture to the middle of England make a point of spending a few days in Sherwood Forest. You'll see mature oak trees hundreds of years old and experience the unique atmosphere of 'the woods' - undisturbed woodland that was once royal property maintained for hunting deer.The National Trust now own most of Sherwood and it is open to the public year round.

Major Oak - One of the Oldest Oaks in England

There are many fine specimens of oak in Sherwood Forest, some estimated to be up to 1000 years old. When sailing ships were built of wood and beams and floorboards for houses were needed oak was the favourite wood to use. Oak is extremely strong and durable and can last hundreds of years if well looked after.

Robin Hood's tree or Major Oak is a true giant. Endless stories tell of the infamous outlaw hiding in the hollow trunk or up in the branches to escape the evil Sheriff of Nottingham's soldiers. Years ago it was 'open' to the public just like any standing tree in the woods but recently experts have declared it a safety hazard (in true 21st century style) so it is fenced off.

It's a good move. Major Oak was becoming too much of an attraction for curious tourists and for its own health needs to be kept free of vandalism and fire. It is so old even the branches need to be supported yet it still retains that air of mystery and greatness, like some old king or wise veteran.

Many poems have been written about oak trees:

A mile or two from Sherwood Forest is Worksop's Priory Church. Built in the 12th century it stands as an elegant and beautifully proportioned reminder of the medieval craftsmen's talents. As a boy I played for many hours in the shadow of it's towers, messing about in the river that flows nearby, catching loaches and spiny stickleback fish.

It was here I first learnt of The Blue Lady who was said to haunt the grounds between the great oak door of the portal and the spitting stone in front of the Priory. On certain nights she was supposed to walk under the lime trees questioning any young man who happened to pass by. If the young man did not answer to the name of Thomas the Blue Lady would start her inconsolable weeping and screaming, said to be unbearable in its intensity.

Thankfully, I never did get to see this unfortunate mother but some research years later helped put the story into perspective.

The History Behind The Blue Lady

Maud de Furnival (1180-1247/50) a local lady of some substance and power had two sons, Gerard and Thomas, both knights. They had gone off to fight in the Crusades, as their grandfather had done years earlier with Richard the Lionheart, and fought in the battle of Damietta, Egypt in 1238.

Thomas was killed in action and was buried in the sands by his brother Gerard. On his return to England some months later the sad news was revealed to his mother. She was overcome with grief and demanded that Gerard return to the Holy Lands and bring back the remains of her son, especially his heart.

Gerard did as his mother wished, returning Thomas's heart to the consecrated grounds of the Priory Church, where he lies to this day. Maud it is said never quite got over Thomas's death and this is the reason why the Blue Lady still has a presence.

Despite the world wars, the social upheavals, Henry VIII's dissolution of the monasteries, the civil war, - Worksop was involved in the English civil war (1642-49) - somehow the beautiful Priory Church survived. Today it seems to bask in the knowledge of centuries of worship, prayer and song and sits watching the crazy modern world go by.

I would play around its fringes and in the atmospheric graveyard as a child. Hide and seek, rallico, British bulldog and other games that have all but gone. The strangest habit we all had at that time was to leave our mark on the 'spitting stone', a thick old slab in the shadow of the south tower underneath which lay Old Nick, the devil himself! By spitting on him you made sure he wouldn't rise up out of the ground!

In its time Worksop, on the edge of Sherwood Forest, has produced liquorice, fine Windsor chairs, good ales, millions of tons of coal and beautiful works of art. It still produces excellent sportsmen - Lee Westwood, a world class golfer being the latest - and plenty of uncommon sense.

The town was once a hotbed of political and industrial intrigue and did attract one famous novelist, poet and short story writer one day in the year 1912.

D.H. Lawrence came to Worksop to get first hand experience of the miner's strike. He thought Worksop 'a rum old place' (which means he thought it a bit out of the ordinary) 'snied with miners' (snied = full of). He was in town to get material for his short stories and like the true artist he was his experiences went straight into his fiction. He also mentions Worksop in one of his most famous novel: Women in Love.

He did not answer. She remained with the jewels shut in her hand. She wanted to try them on her fingers, but something in her would not let her. And moreover, she was afraid her hands were too large, she shrank from the mortification of a failure to put them on any but her little finger. They travelled in silence through the empty lanes.

Driving in a motor-car excited her, she forgot his presence even.

`Where are we?' she asked suddenly.

`Not far from Worksop.'

`And where are we going?'

It was the answer she liked.

She opened her hand to look at the rings. They gave her such pleasure, as they lay, the three circles, with their knotted jewels, entangled in her palm. She would have to try them on. She did so secretly, unwilling to let him see, so that he should not know her finger was too large for them. But he saw nevertheless. He always saw, if she wanted him not to. It was another of his hateful, watchful characteristics.

Lawrence was a controversial figure in his day and still provokes extreme opinion. His novel Lady Chatterley's Lover caused uproar in the early 1960s when a British court ruled in favour of its publication.

The public queued for days to get their hands on the first copies. Certain social commentators have since claimed that Lawrence's 'foul literature' was the catalyst for the start of the permissive society that sprung up in the late 1960s and 70s.