Taba From a Small Bedouin Village to a World Tourist City

Eman is a writer and an engineer, living in Egypt. She writes about nature and historical places in Egypt.

Taba is an Egyptian city located in the East of the Sinai Peninsula, at the top of Aqaba Gulf between the mountains and the eastern plateau of Taba from one hand and the water of the Gulf from the other hand. It is about 240 km north of Sharm_El_Sheikh, and 550 km from the capital of Egypt, Cairo. The city covers an area of 508.8 acres. Taba represents a great historical and strategic value, as the last points of the Egyptian borders on the north-east. The coastline of Taba is overlooking a range of beaches, bays, and diving places. Egyptian government investments in Taba amounted to 700 million Egyptian pounds in infrastructure projects including the construction of roads, housing, services, as well as sewage and telephone landlines. The tourism investments of the private sector, including foreign investments, amounted to about 3 billion Egyptian pounds in the construction of luxury resorts, hotels, and service projects. 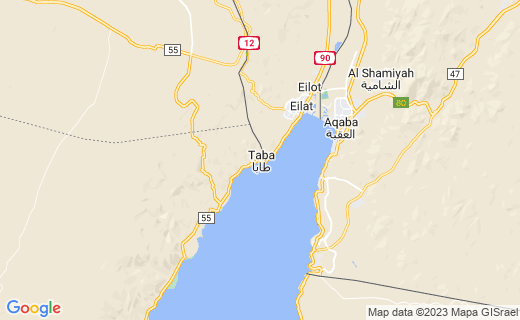 The Strategic History of Taba

In the past, there were many problems around the Taba borders, but after every problem, it always stelled as Egyptian land.

On 13 February 1841, when Egypt was following the Ottoman Empire, the Ottoman Sultan (ruler) issued a decree granting Muhammad_Ali and his sons after him the rule of Egypt and Sudan. The decree included a map to explain the borders of Egypt, which placed the majority of Sinai inside Egypt including Taba, that situation continued until 1892 when the Ottoman Sultan sent a decree to Mohammad Ali's grandson Abbas_II depriving Egypt of half the Sinai, a famous crisis occurred called the decree crisis (Taba crisis), which ended with British intervention and the approval of Sultan Abdul_Hamid_II on the Egyptian borderline which started from Rafah north on the Mediterranean sea to the head of Gulf of Aqaba to the south at a point located three miles west of Aqaba_Fortress. In 1906 there was another crisis when Turkish forces advanced to Taba, then Britain intervened for the second time and forced the Ottomans to withdraw afterward British authority decided to draw the Egyptian borderline with numbered marks then Taba has settled as a part of Egypt.

After the setback of the 1967 War, Israel occupied all of Sinai. On the 6th of October 1973 War, Egyptian forces crossed the Suez Canal to Sinai and achieved victory. The fighting stopped on 28 October 1973 by the UN Security Council resolution. In 1979 the Egyptian President Anwar al-Sadat signed a peace treaty with Israel to retrieve the occupied Egyptian lands in Sinai through negotiations. The peace treaty was signed at the White House in the presence of US President Jimmy Carter. In 1982 Israel began its withdrawal from Sinai except for Taba because Israel sought to create a crisis about 14 border marks, the most important of them was the 91 mark in Taba. After a lot of negotiations, the dispute had been resolved in accordance with the rules of international law and the provisions of the peace treaty. On 29 September 1988, the arbitration decision in Geneva, Switzerland, in the dispute over Taba, was in favor of Egypt. On 19 March 1989, the Egyptian flag was raised on the land of Taba.

The most Attractive Landmarks and Natural Tourist Places in Taba

The Bedouin of Sinai

The Bedouin village includes nearly 198 Bedouin houses, a school, a healthy unite, 60 shops, and a youth center. The Egyptian government established this village to serve the Bedouin communities at a cost of 50 million Egyptian pounds.

Despite the transformation of Taba into a world tourist city. Tourists from all over the world come to enjoy it. The city has many resorts and luxury tourist hotels, along with many cities of Sinai but the Bedouins still retain their customs and traditions which has no disagreement over its intellectual richness.

Sinai Bedouins are characterized by courage and generosity. They say about generosity as "something soft, a shy face, and a soft question."

Bedouins used to celebrate the marriage and the return of the pilgrim from Mecca and Medina or in the case of the release of a detainee. They are celebrated by singing and saying poetry.

The differences between people or tribes are mostly resolved by senior tribesmen through negotiations and delays.

Most nomads are fond of hunting and go on hunting trips that may last for days to enter the desert, some of whom have great skills in hunting deer, rabbits, and quails.

The Bedouin clothing industry bears the history and culture of Sinai. It is a basic source of livelihood for thousands of Bedouin women. They manufacture traditional Bedouin clothing inside their small houses under the supervision of the local civil society organizations working to increase the income of Bedouin women and preserve the Sinai Heritage. Some forms of embroidery have been developed to suit modern fashion.

It is a small museum that was established to tell the history of the lives of the Sinai people throughout the ages from ancient Egyptians to the modern era.

The museum includes three halls containing 600 artifacts of the ancient Egyptian ages and a collection of prehistoric monuments from the Egyptian Museum.

It includes one hundred pieces from the Greco-Roman Museum.

The museum is open every day from 9 am to 4 pm.

Taba reserve (Natural Park) was declared in 1998, and it covers an area of 3.595 km2. The protected area is characterized by:

Taba Reserve has declared a Natural Park because it contains 50 kinds of rare birds, 25 species of mammals, 24 species of reptiles, and 480 rare plants. Also, the area has many natural geological formations like caves.

Colored Canyon is one of the natural wonders of Taba Reserve. It is a labyrinth of colored sandstone reaches (40-80) meters in some places. The valley consists of colored rocks about 800 m long. The formation of this valley dates back to millions of years ago when the area was part of the Tethys Ocean that existed in North Africa. After the ocean receded due to climate change left behind many valleys including Colored Valley.

The name of the colored canyon was due to the color shades of its walls and the veins of mineral salts which drew lines on its sandstone and limestone and added crimson, orange, silver, gold, purple, red, and yellow colors.

Fjord Bay, 15 km south of Taba, is an amazing dive spot surrounded by a natural bay of coral reefs in an unforgettable scene. The bay is suitable for diving enthusiasts and professionals where:

It is a coral island, 8 km south of Taba, located at the summit of the Gulf of Aqaba, and famous for its Saladin Castle.

After 1099 Crusaders built a fortress on Pharaoh's island and collected the ransom from passing pilgrims until 1171 when Sarah al-Din decided to seize it at the same time as Aqaba to repel Crusade raids, protect Muslim pilgrims to Mecca and Medina across Sinai, and secure Aqaba Gulf. Salah al-Din ordered the castle to be reconstructed and redeveloped.

The fortress was built on two prominent towers on the island, surrounded by fences and towers for protection and observation. The castle includes defensive facilities, a workshop for manufacturing weapons, a military meeting room, solder's rooms, a bread oven, a steam bath, water tanks, and a mosque. Also, the sites of the towers of pigeons, which were used to transport messages in the Middle Ages, were found in the castle. The citadel was built of granite stone. The Castle of Pharao's island along with al-Gundi Castle which was built by Salah al-Din also in Sinai were added to the UNESCO World Heritage on 28 July 2003 because of their universal cultural value.

In 1181 Raynald_of_Chatillon surrounded the island to close the Red Sea to Muslims and monopolize the trade of the Far East and the Indian Ocean by seizing Aqaba and Aden southward. So Abu Bakr ibn Ayyub confronted him with instructions from his brother Salah al-Din, which was a prelude to the battle of Hattin.

Taba Heights is an area prepared to be the most luxurious place in the Middle East and North Africa. The location of Taba Heights Resort which is overlooking the Red Sea and its proximity to the international airport of Taba between the Sinai Mountains has made it a truly unique area.

The region contains tourist resorts and hotels at the highest level of quality owned by a group of international specializing in the organization and management of hotels and there is the Marina Center, which is awarded many prizes in water sports.

Since Taba was just a small Bedouin village there was no real transport network, but it changed completely after Taba had become a tourist city.

Taba Heights built a marina to be an integrated tourist commercial port from which yachting trips to the Jordanian port of Aqaba.