Thelma has lived and worked for almost three years in the Republic of Ireland as a spa wellness massage therapist.

You have to love or at least like the country to accept the changes of the weather!!!

In 2007 when my husband and I were having a holiday in the south of Ireland, I asked an irish woman how many days a year does it rain in her country. She looked at me and said, ` well, I have to think it first.´ Looking into the sky she said, ` I think it´s around 200 days a year or even more. I´m not sure but I think so.´ --` O my God, I will be having depression for that´, I said.

Knowing how changeable the weather is and how expensive it is to live in Ireland, it did not bother me making plans with my hubby for that coming year 2008. We researched every single thing to know how to survive in the country we learn to love. I´ve looked every Spa that we came across on that 4 weeks holiday, had asked information and collected some brochures. I was determined to go out of Germany. At least for a few years before retiring to the Philippines. I was the striving force!

Having settled in Carne Rock and having the job that I wanted, made me feel great. I worked part time but still earned 3 times more than in the stressful full time job that I had in Germany. I did have a lot of time reading literature. Teacher Man from Frank Mc Court was the best I´ve read there.

I´m getting far from my weather story...The first day we arrived in our new "home", I started writing on my diary how the weather was. I wrote everyday: `shower, slightly raining, raining or sun shine the whole day, stormy, gale, etc...´ I did it for a few months.Then I only counted rainy days. I wanted to know if it´s really raining 200 days a year. When I was working, I asked my hubby if it was raining and how was it raining for I did not notice the rain unless it was a gale. I´m sure he was thinking I was getting crazy but then he knows me. I even counted how many kilometers I walked in my work everyday in Germany by having the km. scale in my working pants. Hahaha...I´m nuts. Then, it rains almost everyday that I felt bored counting so I stopped counting rainy days instead I counted the sunny one.

When I woke up in the morning and the sun was bright, I immediately put the dirty clothes in the washing machine to let them dry outside the house. When it was windy, it took only 2 hours to let them dry and I don´t even have to iron them. Just fold them and there I´ve saved time and effort. But then, it was not always like that. It happened many times that when I hung the clothes, it was still sunny. A few minutes later, I saw the dark clouds from the window and suddenly it rained. I went out and took off the clothes from the clothes-line. Then it stopped and there came the sun again. So, I hung the clothes again and then it rained before I have finished my job. So on that 1 day alone, there was more or less 5 times hanging off and hanging on the clothes. One day I realized how the irish solve this problem. They just leave the clothes outside without having a hassle like what I did.

I´ve learned a lot about the irish weather and most of all how the irish cope with this weather. I appreciate how calm they are. In the years that I lived there I have not heard a single complain about it. I´m sure now that it rains at least 200 days a year but the people counted only the lovely sunny days that they have... `Lovely day,isn´t it?´...that´s what I used to hear.

A few weeks ago as I was welcoming a client here in Germany, she said `what a f...ng rain again.´ Then I looked confusely at her and said--`Sorry??? Oh right, was it raining the whole day???´

Many weathers in a day!!!

Things To Bring With You When You Visit Ireland 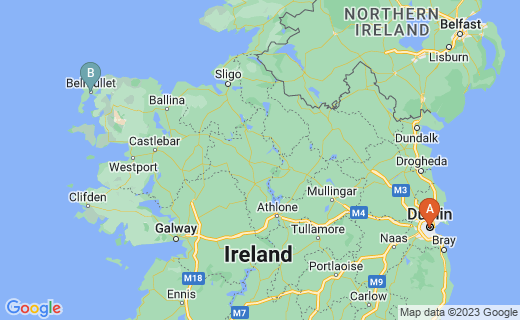 Dublin is about a 4 hours drive by car to Belmullet, Co. Mayo.

Belmullet is a beautiful town in County Mayo. It is near to the Atlantic ocean.

When is the exact time to visit Ireland? Actually, there is no exact time to visit Ireland. If you are very lucky, you will have dry days in most of your vacation time. Not even in summer is the sun shining everyday. As I have mentioned above, a day has sometimes 4 seasons. So be prepared to have your raincoat with you and your rain boots. Though the weather forecast is announcing the kind of weather, May, June and July are still the best months of the year to spend a vacation in Ireland. I hope you are lucky!

Thanks for dropping by and please leave a comment. It´s highly appreciated. Have a beautiful and sunny day.

Have you experienced this kind of changeable weather before in your life? Where?

Some Facts About Ireland

4 Things You Can Do In A Rainy Day

Yes, Ireland has a lot of weather in a day but don´t make the weather affect your plan in life. There are many things you can do in a rainy day besides staying at the comfort of your home while reading a book. Here are some suggestions for you to do.

I will add more to this when I can think of other ways to spend a day when it´s raining again. Thanks for reading. Bye for now.