The Delights of Traveling: Getting to Lake Toba 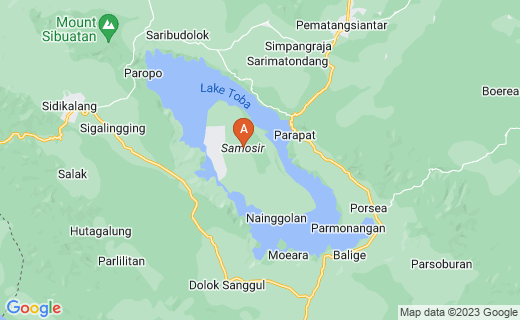 How to get to Samosir Island

Samosir Island is one of those places that when you get here, you are transported to a beautiful landscapes and sounds that you would never hear if you live in the city. It is the world’s best kept secret and it is such a secret that it is a task to get here.

When I say that getting here is a task, it is a TASK.

With the abundance of cheap flights throughout Southeast Asia, you can probably get a flight from wherever you are and fly into Medan, Banda Aceh, or Silagit. However, from the airport, you need to take either a minibus or a taxi to get to Lake Toba. It usually takes about 4-5 hours to get here and then you have to take a ferry to Samosir Island.

Honestly, I had no idea that this option was even a choice. When my boyfriend and I were in Penang, Malaysia, we had heard from other backpackers that there was a ferry that you can take from Malaysia to Indonesia. We thought that it was the best option because the ferry is always a fixed price rather than flights that can fluctuate pretty regularly. The only problem with that was every time that we googled the ferry trips, it seemed that they didn’t exist anymore. The last online post was posted in 2016.

To take the ferry, you need to get to Port Klang/Pelabuhan Klang and go to the ferry terminal and pay about RM 140 ($ 35) per person, which is so cheap to get to another country. There is only one ferry per day at 9 AM, so definitely get there on time so you don’t have to wait another 24 hours for the next one.

We started in Penang, Malaysia at around 12:45 AM, we took the overnight bus to Kuala Lumpur which took about 5-6 hours and costed about RM61 ($15.20) per person. That price is a bit on the high side, but the bus was really comfortable and we slept pretty much the entire way there. We arrived at KL Sentral at around 7 AM, which gave us ample time to get to the ferry terminal. We took the KTM commuter train to Pelabuhan Klang and it was right next to the ferry terminal, which was very convenient.

However, because of Hari Raya, they decided to take a holiday from running the ferries. The earliest ferry was the next day at 9 AM. We literally had 24 hours to wait until the next ferry. We really didn’t want to get a hotel room for the night because it was kind of out of our budget. So, Felix decided that he wanted to find a park to chill at for a while. I am not really one to step out of my comfort zone too much, but I did it anyway. After a while, I wanted to head back to the ferry terminal because I wanted to charge our phone. We set up our bed and we definitely got some interesting looks from people and people that were so shocked that we wanted to stay at the terminal for the night. It actually wasn’t too bad, but it felt like an eternity until the next day. Mosquitoes were horrendous to me that night, constantly biting me and causing me to not be able to sleep. Felix slept like a log and I was just constantly tossing and turning. The next morning finally arrived and people were arriving to have breakfast and wait for the ferry.

The one thing that people need to understand when they travel Southeast Asia is that people in Asia do things on their own time. They may say or write a certain time, but things don’t actually start happening until about an hour later. So, the timetable said 9AM, but we did not end up leaving until about 12 PM, which was definitely later than I thought we would leave and later than I thought we would arrive in Indonesia. The ferry to get across was definitely quite cramped, but was relatively comfortable and I was exhausted from the night of no sleep that I slept all the way through.

We arrived in Tanjung Balai at around 6PM and it took some time for us to get through immigration. Because I was traveling with my Malaysian passport, it was easy for me to get through and I started talking to a taxi driver outside that would bring us to Lake Toba for 100,000 IDR, at the time I thought that was a bit expensive, but it can definitely get more expensive. Trust me.

It was taking a while for Felix to get through and I was really curious why it was taking so long. So, I went back inside to see where he was in the line and he was still behind a few people so I went back to the waiting area. But, after what seemed like ages he still didn’t come out. Turns out that he was having a problem with his passport because he didn’t have a departure flight or ferry out of Indonesia. They didn’t even believe that he was German and he had to prove that he had citizenship in Germany. After what seemed like ages, they finally let us go and by that time, all the taxis were gone and the only things left were the very touristy rickshaws that overcharge like all hell. At first we thought that is was ok to give the guy 100,000 IDR to bring us to the bus stop because we didn’t have a lot of options. However, it was when we stopped at the petrol station and he asked us to pay 200,000 IDR that we thought it was quite ridiculous, so we got out of the rickshaw and decided to walk to the bus stop. There were no streetlights and cars were constantly going past, and I was completely terrified. So, Felix found a guy on a motorcycle to tell us how to get to the nearest bus station. He was very friendly and he said that he would drive us there, but with our bags and 3 people on a motorbike, it felt like I was going to fall off. We finally got to the bus stop, but no buses were running anymore for the night.

We ended up staying at the Indonesian guy’s house, which was definitely interesting because he had taken a liking to Felix. The next morning, the guy drove us to the bus stop and thank goodness we got there at the right time because there was a bus waiting there and we started our Indonesian journey by making our way to Medan, which took about 4-5 hours to get to Parapat, which is the main land town in Lake Toba. The minibus was definitely the epitome of local transportation because it was filled with locals and because Felix was the only European on the bus, they were so fascinated by him and where he was from and by the end of the trip, they all wanted to take photos with him.

We finally got to the ferry terminal in Parapat and didn’t have to wait for the ferry because there was one already waiting there. We started the final part of our journey to Samosir Island, which took about 30 minutes and we were finally here!

Samosir has this vibe of peacefulness and it is a place where the second that you look out onto the lake, you feel like all your worries disappear and you are transported to a place of fantasy with the sounds of the birds chirping, roosters crowing, and the sounds of happy people.