Lynsey enjoys travelling, and is sure to have a camera and a notebook with her wherever she goes, even in her home country, Scotland.

The Tour of The Dungeon

The first stop was a waiting area designed to look like a holding cell where we sat to await the first act... and some other visitors. While waiting, there was a chance to have a look at some interesting wall art depicting some of Scotland's unlikely laws that are still in existence. My favourite being that it is illegal to be in possession of a lunatic without a license!

We were then ushered into a courtroom to face "The Judgement of Sinners" whereby selected members of the group were tried for various crimes- including naked dancing and cross dressing! This hilarious act was a good warm up, and there were a lot of laughs!

After finding out fate, we were directed to the Torture Room, where the torture master gave eye watering demonstrations to unlucky visitors. A memorable tool was the "chappie chopper"- a sore point for the gents, I'm sure. While educational, the torture chamber started to bring out the goosebumps!

We were then directed to a lovely boat ride...in pitch blackness... into the cave of Sawney Bean, head of the cannibalistic, inbred Bean family. I'm not scared easily, but this ride terrified me. I won't spoil the experience, but it's definitely not for the faint hearted.

We found the Bean's cave, and were greeted by a member of the family. He took a shine to one of the scared visitors, and offered us pickled flesh... yummy!!

Unfortunately the cave came under attack and we had to run to safety... to a medical school... where we were taught of anatomy... and Burke & Hare.

Interestingly these grave robbers weren't satisfied with waiting on graves to fill themselves, so sped up the process in order to supply the increasing demand from medical schools for fresh corpses.

We were lucky enough to witness a live autopsy on one of the bodies before the police arrived, and we had to escape via the graveyard. At the foot of the graveyard, our escape led us right into Mary King's close, where we were told the harrowing tale of Mary King and her family, but had to flee as her ghost had came back for vengeance!

On the way, we met a good friend of William Wallace, who told of his fate with the "chappie chopper" amongst other terrible tales. Unluckily, one of the English soldiers were among the group which meant that we all had to face hanging... on the Extremis- a sudden drop ride designed to get hearts racing!

In our disorientated state, we then had to find out way through the labyrinth of lost souls, which we got stuck in for quite some time, only to emerge at the photo station... safe at last!

Reception staff were enthusiastic and energetic, despite it being a dreary, quiet Tuesday. There were no queues to contend with, so we were booked in straight away. The staff were helpful as I didn't have a print out of my online booking number, and the booking was found easily by name!

The characters were accurately portrayed and well presented, and the actors had an uncanny knack for picking out those in the group with a slightly nervous disposition, much to our amusement!

The staff at the photo area at the end of the experience were willing to help us when we couldn't see any of our pictures on the screens, and the photo service offered a selection of personalised souvenirs from as little as £3.

The souvenir shop was full to the brim with themed goodies, and even had a penny press which was easy to use, and ideal for me as I love to collect these types of coins.

Overall, I was happy with the staff and their service, and I would recommend the attraction based on them alone!

Overall, the Edinburgh Dungeon was a fun, educational and terrifying experience! The staff were great, and the scenes were interesting.

In comparison to a visit of the sister dungeon in Amsterdam, I actually preferred the Edinburgh Dungeon as I felt that the slower pace and smaller group size allowed the experience to feel more tailored to the individuals involved. We were able to see everything, whereas Amsterdam was a tad crowded when we went there, so we missed a few things.

Unfortunately, photography isn't allowed, so I don't have any pictures to show, but I think that the lack of cameras and phones, with their irritating lights, actually added to the mood of the experience.

I would recommend stopping off at the Edinburgh Dungeon if you were passing through the city- but just remember to plan ahead and get your tickets booked!

Located just off Waverley Bridge, 5 minutes from Waverley station, the Edinburgh Dungeon is ideally located for tourists in central Edinburgh. Offering an interactive, educational tour through some of Scotland's most gory history, as well as actors who bring the stories to life among some amazing, realistic settings, The Edinburgh Dungeon isa great day out for all the family. However, I'd give it a miss if you have a dodgy heart, as there are definitely some scary moments!

Ticket prices can be a bit steep if you buy on the door, but with a no-fuss online booking system, I was able to book the night before, and save £7 per person! Pricing throughout the venue, including the gift shop, was fairly reasonable too, so this is a day out that doesn't cost the earth! 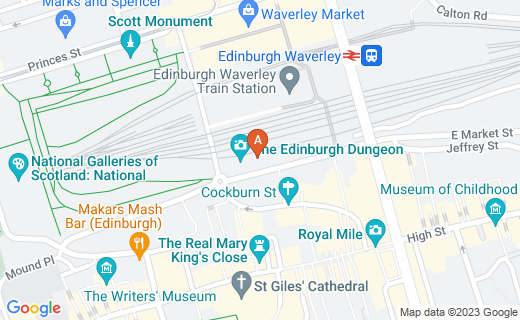