The Four Seasons of Connecticut

I had lived in Connecticut for most of my life, having moved to the state from upper state New York when I was two years old. I am not particularly fond of Connecticut, but one thing I do love about the state is the fact that it has four seasons. For anyone unfamiliar with the state of Connecticut, it is in the Northeastern part of the United States, in an area called, 'New England." New England was the first area of the U.S. to be settled by explorers (Native Americans were already here) and therefore has many of the countries oldest houses and buildings.

Connecticut has a southern coastline located on the Long Island Sound, so it does have ocean beaches without an undertow, and that is quite nice for families with young children. Ocean water temperatures are a bit warmer than directly on the Atlantic Ocean as well. The middle and Northwestern parts of the state are geographically hilly, and therefore you may have heard of Connecticut's "rolling hills."

So the following article will take you through the four seasons in the state, complete with pictures.

Summer in Connecticut is a beautiful experience if you can stand the heat and humidity. The average temperature in July in the capital city of Hartford ranges from a high of 84 degrees Fahrenheit to a low of 65 degrees Fahrenheit. There are hotter days than that, and when it is 94 and humid, the sweat can just pour down one's face. Those living on the shore have it a bit cooler and are fortunate enough to get to the beach to cool down.

Summer in Connecticut brings to mind blooming mountain laurel (the state flower) along hiking trails, days at the beach along Long Island Sound, at beaches such as Ocean Beach in New London, Rocky Neck in East Lyme and Hammonasset in Madison. Clam chowder and lobster is a delicious treat at Abbott's or Costello's in Noank, eagles flying low along the Connecticut River searching for their dinner near Gillette's Castle in East Haddam and days spent on sailboats and power boats alike on the shoreline as well as skimming along the many rivers and lakes that dot the state.

Which Connecticut Season Would You Most Like To Experience?

Fall temperatures in October in Connecticut range from a high of 63 Fahrenheit to a low of 42 Fahrenheit. Fall in Connecticut is my very favorite time of year.The crisp autumn air, the smell of fallen leaves as they crunch under one's feet on the sidewalk, and the beautiful fall colors of gold, red and orange all add to the delicious scents and scenes of fall in Connecticut. Bright orange pumpkins dot the doorsteps of farmhouses with cornstalks attached to porch posts and Indian corn hanging on front doors. At cider mills in the country, there is cider to be sipped, corn mazes for kids to find their way through, and wild grapes and bittersweet growing wild on the sides of the roads. Many a New Englander, Connecticut residents included, decorate both the inside and outsides of their homes with bittersweet. An identifying feature for those who aren't familiar with this plant is the orangy/yellow outside shells with red berries inside. Grape vines are also harvested from nearby wild grapes and used to make wreaths, also for inside or outside decorations.

Yes, Fall in Connecticut is an amazing experience to behold.

Winter in Connecticut can be mild, but over the past few years, it has been a real treat to fans of snow, and a nightmare to those who dislike snow, ice and the shoveling and slippery roads that come with it. It can be quite cold, with the temperatures dipping way below freezing, and sometimes with the wind chill factor, the temps get below zero. Connecticut school children usually have five to seven snow days off from school throughout the winter, most of them in January and February. One can find children outside those days building snowmen and snow forts, and throwing snowballs while parents wearily shovel snow off driveways and sidewalks.Sometimes neighbors will wave to each other while shoveling driveways and sidewalks and there is a camaraderie among these New Englanders doing what they need to do to get rid of the snow to continue with their daily lives of going to work or to the grocery store to buy food for their families.The average temperature in Connecticut in January though is a high of 36 degrees Fahrenheit and a low of 18 Fahrenheit.

Skiing is popular in the winter months at Powder Ridge in the middle of the state in aptly named Middlefield, and also at Mohawk Mountain in the Northwest town of Cornwall. Skating on outdoor ponds or in flooded flat areas of small towns make outside activities lots of fun. And sledding is popular throughout the state whenever it snows. After the fun of outdoor winter activities, it's fun to come inside and warm up with a hot cup of cocoa or hot apple cider.

As you can imagine, Spring is a welcome season in Connecticut after a snowy winter season. Spring in this state brings plenty of Daffodils and Irises peeking their brightly colored heads out of the soil. Lilacs bring forth their headily scented blooms of lavender colored flowers. Forsythia bushes bloom their cheery yellow flowers and apple blossoms, and flowering dogwood trees are abundant, making the Connecticut landscape beautiful to behold. Spring is quite windy in Connecticut, so it's the perfect season for kite flying. You can often find people flying kits at Harness Park in Waterford, CT. Because Connecticut does have a shoreline, families and dog owners can often be found out on the beaches enjoying the Spring breezes after as long, cold winter. People plant gardens and flowers in their gardens in the Spring, and neighbors often give each other gardening advice over the back, or side, fence!The average temperatures in Connecticut in April range from a high of 60 degrees Fahrenheit to a low of 40.

Connecticut may not be the most scenic of all the U.S. states, but it certainly has beautiful seasons.

Hiking in Connecticut can be done year round because the weather is usually cooperative, even in Winter, as long as you pick a day that's not too cold. Bring your camera so you can capture the beauty that the state has to offer. I have used the book below many times, alone and with my children, to venture into the beauty of Connecticut. 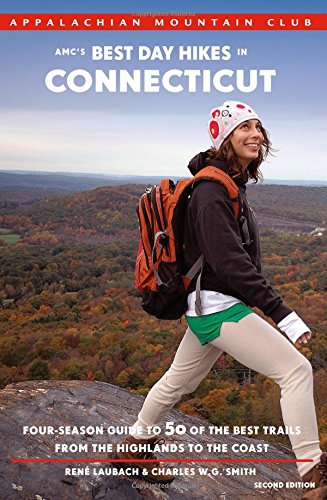 AMC's Best Day Hikes in Connecticut, 2nd: Four-Season Guide to 50 of the Best Trails from the Highlands to the Coast
Buy Now