'Gateway of India', a historical monument in Mumbai attracts millions of tourists every year. What the Statue of Liberty is for New York, it is 'Gateway of India' for Mumbai. The monument is often referred as the 'Taj Mahal of Mumbai'. Incidentally, I may inform you that Mumbai was earlier known as Bombay and it is the capital city of Maharashtra.

Let's us take a happy ride to the past history of India. India was under the British rule till she got independence on 15th August 1947. Obviously, because of the British presence and their great influence for a quite long period, India had a number of historical monuments at different parts of the land. All these showcasing the brilliant British architectural skill. Among them, the Gateway of India, Mumbai has a prominent place.

The Story of Gateway of India

The Gateway of India was built to commemorate the visit of King George V and Queen Mary to Bombay in 1911. It was a grand royal event. The British government decided to make the royal visit a great event. They planned to build a magnificent building in Bombay as part of the celebration. The building was thus constructed between 1915 and 1919.

Features of the Fabulous Building

The Gateway of India was designed and built by the British Architect George Willett. The then Governor of Bombay laid the first stone of the building.

The monument was built on the land, which was reclaimed from the Arabian Sea. It is 85 feet high and the structure is built at Appollo Bunder area, South of Mumbai, a popular meeting place of people. The structure is a basalt arch. This marvel monument is a true symbol for the lavish expression of imperial supremacy. It was built with yellow stone in Indo-Saracen style. It is 26 meters high archway is believed to be inspired by the Arch of Triumph in Paris. Apart from the colonial design of the British architect, it has the influence of the 16th-century Gujarati style also in its architecture. Gateway of India, a symbol of colonialism in India is the icon of Mumbai now.

There are five jetties at the gateway, each serving different people and purpose. The second and third jetty is for the tourists to visit Elephanta Caves, nearly 50 minutes boat ride away from the ferry. There is another ferry ride from here to Alibaug and Mandwa, very popular tourist joints.

The Significance of the Building

As already explained, it was built to commemorate the visit of the British King George V and Queen Mary to the city of Bombay. During that time of British Raj (rule), the Viceroys and Governors landed here upon their India visit. The great arrival of the greatest! Ironically, the same place was later turned to be their departing point also from India. It was the last departure point of the British from India when India got independence. The last British troops left the shores of independent India in 1947 when the British Raj ended. The last of the British ships that set sail for England left from here. This marvel monument is a true symbol for the lavish expression of the imperial supremacy. The area where the Gateway of India stands is a picturesque place. The beautiful Arabian Sea in the background, the architectural wonder called 'Taj Hotel' just opposite and all these add charm to the location. Before the building, you can see hundreds of pigeons and tourists feeding them is a common sight. Tourists across the country reach here and find pleasure in taking a snap standing in front of the monument.

The statue of Chhatrapati Shivaji Maharaj, opposite the gateway, is another attraction. There is also a statue of Swami Vivekananda in the nearby area.

The Gateway of India is a great monument. It is a gateway to Indian History as well. 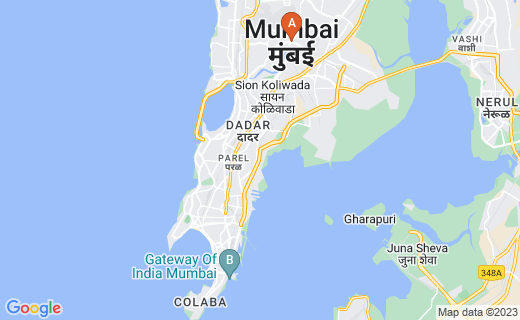 Have you visited this great building in Mumbai in India/

Another Attraction in Mumbai, India