The original Globe Theatre (notice the fancy spelling, Americans!) in London was built by William Shakespeare's playing company, a group of actors called "the Lord Chamberlain's men", after their first sponsor, the Lord Chamberlain, in 1599. (The Lord Chamberlain is one of the chief officers of the royal household in the UK.)  The Globe Theatre was the place to go in Elizabethan England. Prior to William Shakespeare's wonderful plays, most popular entertainment was blood sports of some kind: bear-baiting, bare-fisted boxing, cock-fighting, setting terriers on rats; all accompanied by gambling. The Globe theatre was an experiment of sorts: it brought comedy, drama, and tragedy to the masses. The Globe theatre was one of the original playhouses: a building meant for the express purpose of putting on plays. Before that, plays were mostly performed at court, before the Queen. They weren't really plays, often, but a series of vignettes or tableau. The popular plays, the plays ordinary people were familiar with, were mostly morality plays performed around Christmas time by amateur mummers, performed in someone's freezing, drafty barn, or occasionally the church.

The original owners of the Globe theater were:

The original Globe theater was located near the Thames, in Southwark.

The Globe Theatre was a round, open-air ampitheatre. In the Globe Theatre, the cheap seats weren't seats at all, but standing room on the open-air floor of the arena. A wooden gallery ran all around the Globe in a circle, with the stage at one end of a long oval. The gallery seats were "boxes", and they were enclosed by a balcony and roofed from exposure to the weather. The rich people saw the plays from there.

The original theatre was located in Maiden Lane (which is now Park Street, Southwark), in London, England. It had a capacity of about 3,000 souls, all told, and Shakespeare and his troupe really packed them in! Can you imagine seeing for the very first time a performance of "Romeo and Juliet "? How thrilling it would be, how moving...especially to an audience not previously exposed to dramatic entertainment!

Oddly enough, the first play recorded to have been performed there wasn't a Shakespeare play, but "Every Man Out of His Humour ", a Jonson original, possibly written expressly to initiate the playhouse.

This lovely theatre showed the very first performance of several of Shakespeare's plays, including "Henry V ", and "Henry the Eighth ". The globe Theatre might have been the origin of "theatre in the round", almost--unlike "theatre in the round", where the audience surrounds the stage completely, the stage end of the oval at the Globe Theatre was enclosed and not exposed to the public from the back of the stage.

On June 13, 1613, the Globe Theatre went up in flames. A cannon fired during a performance of Henry the Eighth set the wooden beams and thatching above the stage on fire. No one was hurt, except for a man whose breeches were on fire: a friend doused him with a bottle of beer, putting out his breeches with no casualties. It might be fortunate that the design of the Globe Theatre was open-air.

The Globe was rebuilt in the following year and had a great run, very successful and lucrative for its owners, for many years, until 1644, when the Puritans and Oliver Cromwell shut it down.

A modern reconstruction of the old Globe Theatre, called "Shakespeare's Globe", opened in 1997. It's a powerful tourist attraction and a wonderful venue for Elizabethan drama, today. If you're going to London, don't miss it!

The season for play performances is from May through October. This theater was built along the lines and design of the original Globe Theatre and is a faithful reconstruction. It, too, is open-air. There are no microphones, speakers or amplification. The players have to learn how to project, as actors did in Elizabethan times. All the music is performed on authentic instruments. The actors can see the audience, and the audience can see the actors and each other. It's a great experience in live entertainment, especially if you can appreciate living history in European cities.

The building is entirely English oak--no structural steel was used, and put together with mortise-and-tenon joinery, as in Elizabethan times. It has the first and only thatched roof, over the stage area, allowed in London since the Great Fire of 1666, It's safe--don't worry, they've doused the thatch with enough fire retardent materials to handle even the cannon in "Henry the Eighth". 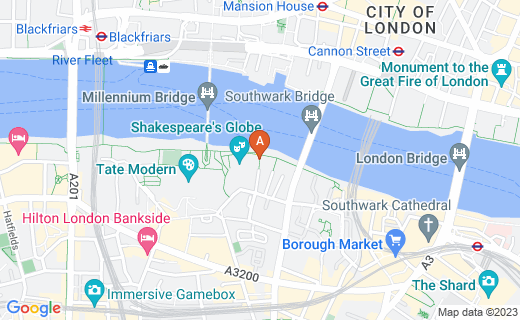