The Great New England Air Show returns to the Barnes Air National Guard Base on August 14-15, 2021

If you love the roar of an airplane engine, the scent of jet fuel in the air, and seeing some of the country’s top pilots showing off their skills then a trip to the air show can make for a fun and entertaining day. After a ten year absence, the US Air Force Thunderbirds returned to the Westover ARB in 2018. It was a memorable experience.

It had been a number of years since I attended an air show so I was looking forward to our visit in 2018 with great anticipation. I was excited to learn that the Thunderbirds would be performing and gracing the sky’s of western Massachusetts with their amazing aerial displays.

The Geico Skytypers also put on an amazing acrobatic aerial display that had the crowd looking skyward in amazement. In addition to the aerial performances, there were a number of high-performance aircraft fly-bys that wowed the crowd.

“A Salute to the Greatest Generation” was the theme of this year’s air show and it was evident by the number of World War II-era airplanes that were present at the show. Watching the B25 bomber make a simulated bombing run must have brought back memories for any veterans in attendance. The B25 Mitchell Bomber, named for aviation pioneer General Billy Mitchell, was made famous as the bomber used in the 1942 Doolittle Raid which was the first US attack on the Japanese mainland following Pearl Harbor. The B25 was also on static display at the show giving visitors an opportunity to get an up-close look at this famous aircraft.

On the ground was an impressive display of static aircraft that visitors could check out, and in many instances climb into.

Representatives from both the Air Force and the Air National Guard were on hand to answer any questions and proudly show off their equipment. It really is amazing to get up close and personal with a giant C-5A Galaxy transport plane and its sheer size makes you wonder how on earth that thing gets airborne. The C-5A was one of the planes that visitors were allowed to walk through and I must say it was impressive and very, very big.

Among the numerous aircraft on display in addition to the C-5A were the: B52 Stratofortress, KC135 Tanker, F15 Eagle, C17 Globemaster, A10 Warthog, MV22 Osprey, and the new F35 in addition to numerous other vintage airplanes.

Attending an air show is the general public’s chance to check out some of the military’s latest hardware as well as some of the premier aircraft from years gone by. It is clear that getting the chance to poke around in one of these airplanes appeals to members of all generations as kids and elders alike explored these planes inside and out.

Throughout the weekend visitors were treated to a number of aerial performances that had eyes glued to the skies above Chicopee. One of the more anticipated displays was the flight demonstration of pilot Bill Stein who put his acrobatic Edge 540 stunt plane through an incredible series of maneuvers.

For those who love the roar of an afterburner the F16 Fighting Falcon that the Thunderbirds fly had everyone in awe of their abilities. There is nothing quite like hearing the roar of an F16 as the pilot points his plane vertically, hits the afterburner, and accelerates straight up into the sky. In addition to the Thunderbirds there were impressive flight demonstrations of the enormous C5A Galaxy and the C17 Globemaster III.

The next air show in western Massachusetts should be at the Barnes Air National Guard Base in Westfield, Massachusetts although no schedule has been released yet. The 2018 edition of the Great New England Air Show was an amazing event as we welcomed the Air Force Thunderbirds Back to the area. This was great news for western Massachusetts as it had been a number years since they graced our skies. 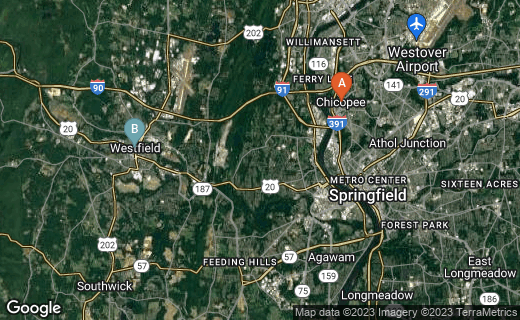