I remember St. Louis for many reasons and one of the most memorable is the view available upon driving into the city from the east. The panorama of the Mississippi River and the Arch are unforgettable; and since the Jefferson extension park has risen around the Arch district, the view is more astounding. Flying in from the east is also a great view, because from a certain angle of descent and circling during landing, the Arch looks as though it is rotating.

The St. Louis McDonald's Restaurants served the McChicken® Sandwich long before units in Ohio were able to produce it - and it was bigger than it is today. The all white-meat chicken patty was the size of a Quarter Pounder® when it was first marketed, whereas, today it is a smaller snack on the $1.00 menu.

The first McDonald's on a Riverboat was stationed in the Mississippi River near the Gateway Arch, the second being built to the east, in Cincinnati, on the Ohio River. Both were fun to visit and attracted new visitors to those river cities. The riverboat McD's are gone, but the memories remain.

In recent years, the Food Network's Alton Brown filmed Feasting on Asphalt, his chronicle of good dining establishments from New Orleans to Minnesota along the famous river on which a young Mark Twain piloted riverboats.

The entertaining Brown and his crew motorcycled up along the Mississippi RIver over the course of several weeks in the leter 2000s, and St. Louis was one of their stops. It is a must on any Mississippi trip.

Tours up and down the Mississippi on showboats are still offered in the 2010s, going all the way New Orleans and back. They make a good set of inland cruises, visiting the waterfronts of several cities. .

Several buildings from the 1904 St. Louis World's Fair still stand in a park in St. Louis and are museums. This is Forest Park, which attracts many visitors to its museums, galleries, and zoo.

One historic building holds a planetarium and museum in which I saw a hologram for the first time. Friends and I also listened to a lecture about Betty and Barney Hill and their 1961 UFO abduction (I always wondered if Betty and Barney Rubble from The Flintstones were named for them). Such presentations are a mainstay of the Forest Park museums. 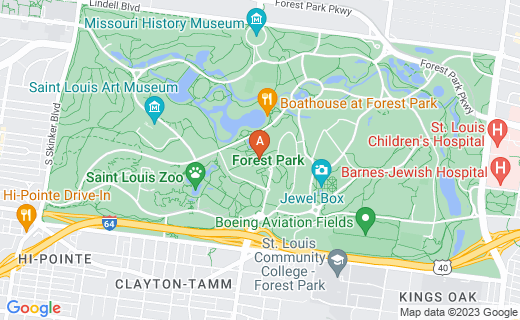 The St. Louis Arch is also called the Gateway to the West as a centerpiece for the Jefferson National Expansion Memorial near the Mississippi Waterfront in the downtown district. As the centerpiece, the Arch was chosen by readers' votes in 2009 as the 49th Greatest Place to Stand in the USA out of 100 great places for photography and conversation named on StoodThere.com. That website also presents a Greatest 100 on the planet, in the UK, and in Europe.

Past the memorial park, the downtown ares is full of shops, businesses, hotels, and other venues. I remember historic cathedrals that we toured downtown, with life sized statues of angels near the platforms and beautiful stain glassed windows and panels. .

We found a K-Mart located on top of a street level parking lot downtown, where you drove a ramp up to the store and another parking lot -- It is probably no longer in existence. The Holiday Inns and Travel Lodges were top notch hotels, as was the St. Lousian in Downtown St. Louis. We sat in the cafe of that hotel, talked, and watched the buses run every 5 minutes one night as we met other travelers and enjoyed the friendliness of the waitresses.

The public transit system provided frequent transportation and numerous routes. A large shopping mall just west of town is much larger than ost of our Midwestern malls. A little further to the west along US Route are famous caverns that have been featured in television game show stunts.

I advise spedning a least a week in the St. Louis area, visiting the Arch, the Jefferson park, Forest Park, the local caverns, and some of the other sights listed below.

On the old Art Linkletter Show, Art liked to match couples up and often used the UNIVAC computer to do so. Once, a couple met on the show without the help of the computer. Art paid for their wedding if they would agree to go to Meramec Caverns, dress as cave people and suddenly chase each other through the crowds of visitors. They agreed and had a great time on this "honeymoon." Unfortunately, they later divorced.