The Harvey Girls, a Slice of American History

How the West Was Won

The Harvey Girls came into being in the early years of railroads. Before railroads included dining cars on their trains, a railroad passenger's only option for meals while travelling was to eat at a roadhouse near a water stop, en route. The food was terrible! Rancid meat, cold beans, and week-old coffee. The trip out west, from New York to Sante Fe by rail, took about five days, and these conditions discouraged many travellers, until the advent of Fred Harvey and the Harvey Girls.

Fred Harvey, who was a railroad freight agent, saw an opportunity there.

The Atchison, Topeka and Sante Fe Railroad Company contracted with Harvey for several eating houses along the route west. Harvey staffed his places with the "Harvey Girls"; waitresses with very high standards.

The subsequent growth and development of the Fred Harvey Company was closely related to that of the Sante Fe Railway. Harvey opened his first depot restaurant in Topeka, Kansas, in January of 1876. Railway officials and customers alike were impressed with Fred Harvey's strict standards for high-quality food and first class Harvey Girl service. As a result, the Sante Fe Railway enetered into subsequent contracts where Harvey was given a "blank check" to set up eating houses along the entire route west. At more prominent locations, these restaurants evolved into hotels, many of which survive today, though not many are open for business. The Harvey Girls were almost as famous as the Harvey restaurants and hotels along the railroad route west.

Of the eighty-four Fred Harvey facilities, some of the more notable include:

Fred Harvey's biggest challenge was not delivering fresh food to his far-flung outposts but finding reliable help. So he placed advertisements in the East and the Midwest for single "young women, 18 to 30 years of age, of good character, attractive and intelligent."

These women became the famed Harvey Girl waitresses, trained in rules of etiquette and given black-and-white uniforms befitting a nun. Humorist Will Rogers once said Harvey and his Harvey Girls "kept the West in food and wives." Indeed, one estimate put the number of Harvey Girls who wound up as brides of western cowboys and railroad men at 20,000.

Mrs. Harvey met each girl as she was hired. Mrs. Harvey had strict standards of etiquetteand codes of behavior, and the prospective aHarvey Girl had to measure up. The jobs were considered plum positions in those days. Paid $17.50 a month, this was a dream job for many young girls who were unable to find work in Eastern cities, with the burgeoning populations of big cities like New York, Boston and Philadelphia.

Many Harvey Girls, who were always respectable, left their employment as a Harvey Girl to became the wife to a customer. One railroad baron said "The Harvey House was not only a good place to eat; it was the Cupid of the Rails". It is estimated that more than 100,000 girls worked for Harvey House restaurants and hotels and of those, 20,000 married their regular customers

How Did They Do It?

How these girls did it, I'll never know. The rules were strict: No fraternizing with the guests. Fred Harvey, who would overturn tables in a fit of temper if he was displeased with the way it was set, was a real stickler for the rules. Any least infraction would result in instant dismissal, without the rest of the person's pay. Fred Harvey advanced the girls a train ticket and half their first month's pay on hiring them, but expected them to keep their end of the bargain, and work the full year's contract, abiding by every strict rule he imposed.

It drove him CRAZY!! His staff kept getting married out from underneath him, over and over. At one point, a rule was imposed that a Harvey girl could not sit down, anywhere, while on duty. Harvey girls were on duty twelve to fourteen hours per day.

How DID they do it? How did they find a way to establish enough of a relationship to get married, without being able to talk to their suitors, or even sit down in their company; while wearing black hosiery, black dresses with white aprons, full length, to the floor; high collars, hair back, no makeup...I love it. These Harvey Girls kept working miracles! 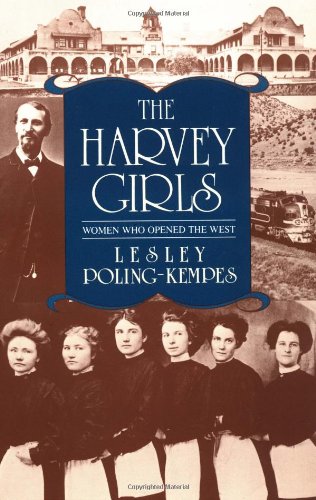 The Harvey Girls: Women Who Opened the West
Buy Now