Bigfoot Of The North, What Is A HODAG? Recipe for Our Hodag Chili.

Bigfoot of the north, the Hodag. Legend of Rhinelander's Hodag.

The Hodag made his first appearance 1896. The Hodag is a hoax by Gene Shepard, a Rhinelander pioneer; this legend has lasted for years.

It is the symbol of the city. The school sports teams are the Hodags. There's Hodag Park and businesses named Hodag. There's the Hodag Country Festival. The Hodag is even on the police cars.

There are t-shirts, sweatshirts, and many, many other items with the Hodag on them, (believe me here you need sweatshirts). We get 40 below in the winter. This summer is not much warmer. (-:

Wal-Mart now carries Hodag items. We get lots of tourists so that's where they head to buy all the souvenirs of the Hodag.

Do you remember snipes? The Hodag is kind of a type of snipe. The Hodag is big green and ugly, but Rhinelander loves him.

There's the Hodag Country Festival. It's here every year in July. Many country stars perform at the Country Fest.

We have many lakes in this area so it brings in fishermen in the summer. We get snowmobiles and hunters in the winter.

The story of the Hodag goes like this. This is a mythical creature of the northern Wisconsin city of Rhinelander. Shepard said he discovered the animal in the woods near Rice Creek. He caught it by blocking the mouth of its den with rocks and rendering it unconscious with chloroform sponge on a pole.

The original Hodag was seven feet long thirty inchs high black and hairy. It had two horns on its head and twelve horns down its spine.

In 1896, the Oneida County Fair was hurting for big attractions when organizers wondered whether Shepard had any ideas.

Did he? Shepard arranged the carving of a Hodag from a wood stump, fitted it with hide and horns and announced this beast captured near Rice Creek outside Rhinelander would be displayed at the fair. Come one, come all.

For many years, Shepard would show the Hodag at county fairs and many people believed it was real.

He displayed it in a dimly lighted tent, controlling it’s movements with wires. Shepard would tell them that he had captured it on “Section 37” and that it ate nothing but white bulldogs and he ate only on Sunday.

I’m amazed that this story has lasted through the years and has become the main attraction of the city.

Hodags are everywhere. The large Hodag above is in front of the Chamber of Commerce. The first Hodag is in a little park by McDonald and I think this was number one it has been sold and replaced with the second one you see in the second photo.

They're all over town and each one is designed differently. These big monsters are auctioned off each year to make money for a nonprofit improvement group for the city of Rhinelander.

I'm not sure, but the one in front of the mall may not be painted all the way. The way it looks I think there will be more paint added to it.

Our daughter and her boyfriend came for Thanksgiving. He couldn't get over all the Hodags in Rhinelander.

Check out more links on the Hodag.

Hodag footprints at the Airport

Recipe for Our Hodag Chili.

1 can of light kidney beans

1 can of dark kidney beans

1 can of diced tomatoes

1 small can of tomato paste

1/2 tsp. of garlic flakes or one chopped garlic clove

salt and pepper to taste

Break up and brown hamburger and onions in butter, do not drain. Add to slow cooker and place all other ingredients in the cooker. Mix well. Start in the morning and cook all day. The long cooking is what makes this chili very good. If need be pour in more broth or water can be added. You can use cheap or expensive hamburger with this. Whatever you would rather use. When chili is done use sour cream and grated cheese to the top. Eat with saltine crackers or bread.

I also cook this in a Dutch oven on top of the stove. After I get the hamburger and onions browned and add other ingredients I cook on low. Sometimes from morning until we eat around 5 or 6.

My husband likes peanut butter on bread with his chili.

5 stars from 3 ratings of Recipe for Hodag Chili.

This little lady is searching for the elusive Hodag. Many have seen it but don't like to talk about it.

That's My Story and I'm Sticking To It.

We lived on one of the Rhinelander lakes part of Moen's chain. We were surrounded by woods. One night we had come home late, it was so dark just moonlight coming through the clouds. We had forgotten to leave a light on. As we got out of the car we could hear this splashing coming from our dock. We headed down that way to see what was going on. Thinking it was a big muskie splashing around. Just as we got down the hill something big let out a roar and came running at us. We took off for the house and got in just in time. It had a large face and horns we could see this much of it in the moonlight. We didn't know what it was, but our neighbors said it had to be a Hodag they had been hearing the roars for weeks. That was our brush with the Hodag. Many a Rhinelander resident has had close calls with Hodags, but so far I have never heard that any resident has been eaten.

That's my story and I'm sticking to it!

Looking for the Hodag

If you ever come to Rhinelander, Wisconsin be sure to check for the Hodag after all he is our Bigfoot way up north. You won't have trouble finding him. Play a game with your kids "how many Hodags can you find?"

There's a Hodag in front of the real estate company. There is even a wood one locked behind a fence at the Rhinelander Logging Museum. He's on the scoreboard at the park. He's in the windows of cars. There are even a few people in town that have the Hodag in their yard. He's on signs at the ice arena and the sign for Hodag Park. This year the Hodags are mini-me Hodags much smaller than all other years. These little Hodags are 3 feet long and 27 inches high. They will be auctioned off in Oct. 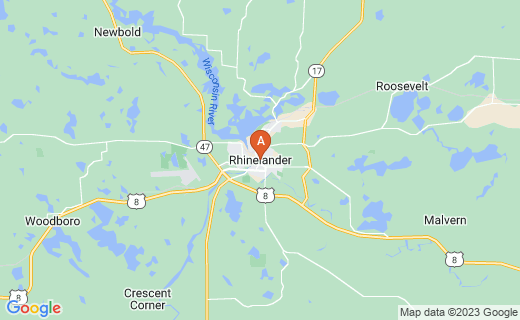