Visiting the Isle of Ulva, Scotland

Where is the Isle of Ulva?

The Isle of Ulva is a small island off the coast of Mull in Scotland. If you are on holiday on Mull pop across on the ferry to explore for a day trip.

You can sit outside, have a picnic, explore the scenery, and learn a little bit of the island's history by popping into Sheila's Cottage. 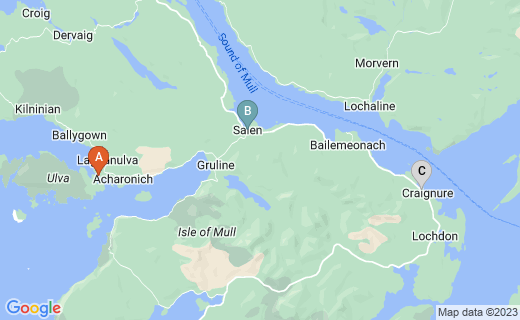 How to get to Ulva

Ulva's ferry port lies on the west side of Mull. You can't bring your car to Ulva, but the port is is most easily accessible by car.

If you don't have a car: you can get a bus from Craignure, the main ferry terminal of Mull, to the settlement of Salen. Salen is on the east side of Mull and about 10 miles away, but you can book a private taxi to take you across.

The other alternative for the fit and hardy is to cycle across to the ferry terminal. Bicycles are welcome on the island.

The ferry runs on demand Monday to Friday, 9am to 5pm, and on Sundays during summer months. It is closed on Saturdays. If the weather is bad the ferry may not run, you should contact the ferry operator in advance to check.

You may also be able to book a trip across at other times by prior arrangement.

There is an old fashioned system in place where you signal across the water that you are waiting for the ferry by drawing across the marker, so that the red square shows. See the photograph to above for the ferry sign.

Have cash ready to pay for your tickets once on the ferry.

The Boathouse is a restaurant specialising in fresh locally caught seafood.

You can also pop for a cup of tea.

Sheila's cottage is a small thatched house that has been restored to show what island life was once like. Sheila MacFadyen lived in the cottage between 1900 and 1950, and worked as a dairy maid.

It was traditional for there to be two rooms, one for livestock and one for living. The interior of the living area has been recreated to show how Sheila, and other islanders like her would have lived. The other room of the cottage has a series of displays which tell you about Ulva's history.

The History of Ulva

When exploring Ulva you will find many abandoned buildings, and evidence of previous settlements.

It is hard to believe now, but back in the early nineteenth century Ulva was a thriving island community with sixteen separate townships. The main industry was collecting and selling kelp, a kind of seaweed. According to the 1841 census Ulva, and its adjoining island Gometra were home to 859 people. However by 1848 there were only 150 people left.

Mr Francis William Clark bought the island in 1835. He forcibly removed hundreds of people from the land to make way for more profitable sheep. These clearances happened across many other parts of Scotland, but Mr Clark is remembered for being particularly cruel for the way he forced the elderly and sick from their homes.

Throughout the nineteenth century population continued to decline, and by the early twentieth century there were only a handful of people left living on Ulva. Today there are about 10 people living on the island permamently.

The island was privately owned by the Howard family, who purchased it from the Clarks in 1945. However in July 2017 it was put up for sale by the family for £4.25m. On 21 June 2018 Ulva was bought by the local community.

The following walks are signposted on Ulva and it is worth following one of them while you are there.

Be prepared for it to be muddy, and wear appropriate footwear.

Ulva is full of wildlife, including the extremely rare Scotch Burnet Moth which is only found on Mull and Ulva.

You can also spot porpoises, dolphins, pilot whales and mink whales in the nearby waters.