About the Leaning Tower of Pisa

The Leaning Tower of Pisa is one of the most recognizable buildings in the world. Its unusual tilt makes it both unique and historic. It is among the most popular tourist attractions in Italy.

The History of The Leaning Tower of Pisa

The correct name of the stunning white marble structure is the Tower of Pisa. The foundation was laid on August 9, 1173 but it took about 199 years to complete. It began leaning 5 years after construction began, but was so expensive to build that destroying it and starting over was never seriously considered. Building stopped for nearly a century because of wars. This ironically saved the Tower of Pisa.

The ground beneath it settled in that time keeping it from falling over. Building resumed in 1272. This time, architects built walls on the leaning side higher than the walls on the other side. This made the Tower of Pisa look oddly curved and the tower began to straighten out. Three more floors were completed before work stopped again in 1284 due to war. A seventh floor was added in 1319 and a bell chamber in 1372.

The bell chamber is in the Gothic style in contrast to the rest of the tower which is Romanesque. The most famous use of the tower was by Galileo Galilei. Legend has it that the scientist dropped two cannon balls of different masses from the Leaning Tower of Pisa. They landed at the same time despite their different weights. This disproved Aristotle's contention that heavier objects fall faster. 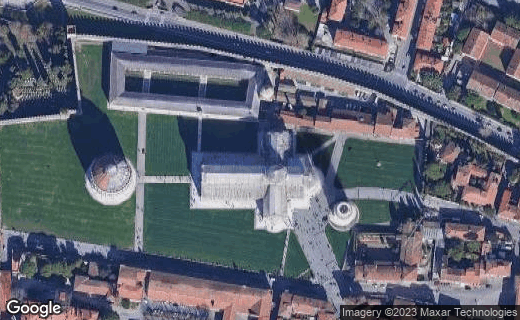 Why the Tower of Pisa Leans

The Tower of Pisa started to lean in 1178 during the construction of the third floor. The ground beneath the tower was unstable and the foundation was poorly constructed and only 3 meters deep.

At first, the Tower of Pisa leaned to the southeast but it now leans to the southwest. In 1990, the lean got so bad that the Tower of Pisa was closed to visitors and the bells were removed. In 1993, nearly 2 million pounds of lead counterweights were placed on the high side of the base of the tower.

Giant bands were wrapped around the first floor for support and huge cables were attached to the third floor and anchored to the ground a block away. 50 cubic yards of dirt were also removed from the higher side of the foundation by drilling 41 parallel tubes into the ground. This allowed engineers to guide the tower into the proper position. These efforts straightened the Leaning Tower of Pisa by 18 inches. It was reopened to visitors in December 2001.

The Function of the Leaning Tower of Pisa

If you take a look at the photograph below, you can see the Tower of Pisa in the background behind the bapistry and cathedral. There are seven bells in the Tower of Pisa. Each one represents a different note in the musical scale

For hundreds of years, the Leaning Tower of Pisa has been a huge tourist attraction. It is one of the most visited tourist sites in all of Italy.

Dimensions of the Leaning Tower of Pisa

The roof is nearly 13 feet to the southwest off center. There are 294 stairs in the south facing staircase and 296 stairs in the north facing staircase. The walls are significantly thicker at the base to hold up the weight of the tower. They are 13 1/2 feet thick at the bottom and about 8 feet thick at the top. The Leaning Tower of Pisa is believed to weigh about 16 thousand tons.

Visiting The Leaning Tower of Pisa

Pisa is located in the region of Tuscany and the Province of Pisa in Central Italy on the country's west coast. Most visitors to Pisa get there by airplane or train. The International Airport Galileo Galilei connects to airports all around Europe. The Pisa train station is one hour trip from the Florence train station.

An hour or two is plenty of time to see the tower and other sights on the Piazza dei Miracoli. There are some other sights in Pisa, but they pale by comparison to the Leaning Tower of Pisa and what you can see in Florence.

The Leaning Tower of Pisa undergoes almost constant restoration work. Wind, rain, time and vibrations from cars and airplanes have taken their toll on the structure. It is common to have part of the Tower of Pisa obstructed by scaffolding. Take this into account when you visit.