My wife and I visited the Lost Sea in Sweetwater, Tennessee recently. It's a relatively enjoyable experience if you are visiting the Smoky Mountains and are staying in the Gatlinburg or Chattanooga area.

We didn't leave the house that morning with the intentions of going hiking in a cave.  However, my wife had just gotten the results to her NCLEX exam for her RN license.  She passed, so we decided that we should go out and do something.  We've done nearly everything there is to do in Knoxville, so I hit I-75 and landed in Sweetwater (exit 60).  First we went to the giant Flea Market that is there.  I don't recommend going there, but if you go the other direction, you will find The Lost Sea.

Upon arrival, we made our way straight to the main building wear the cave tours are given and purchased our tickets, $16.95 per adult. From what I gathered, it's generally not as crowded as it was when we arrived. We just happened to get there right behind a party of 15 and a party of 8, not to mention all the other pairs of 2 and 4 that were there. Only 35 people are allowed per trip, luckily we made it in on the first try. There was a bit too many people there to enjoyably stand around the small lobby area, so I was very relieved when Jacob, our tour guide, finally arrived.

Jacob the tour guide was young and every bit of the typical Tennessean. He was the combination of every Hollywood role ever created to negatively portray a guy from the south: tall, lanky, Wrangler jeans, dirty cowboy boots, Skoal ring, a mustache that didn't connect in the middle, and a slow talking southern drawl to top it all. I've been raised in Tennessee all my life, and even I had a hard time listening to him, but if you're not from around these parts and want to get that full southern experience, Jacob is your guy.

Caves of Knoxville and the Great Smoky Mountains
Buy Now

Craighead Caverns
We headed down the yellow tunnel (pictured below) and into the cave, Craighead Caverns, where Jacob begin to lead us on our trip. We were shown many different stalactite formations. Stalactites are the mineral build up that hangs from the ceiling of a limestone cave, similar looking to a rock icicle. Jacob told us that these stalactites grow one inch every 100 years, and the Lost Sea has some huge ones that must have been growing for hundreds of years.

The cave had several small tunnels that opened up into very large areas. Cherokee Indians used those opening back for protection, and are the first known inhabitants of the cave. Not long after beginning the tour, you will come across a very large opening that has been named "The Council Room". The Cherokee Indians must have used this area quite often due to the large amounts of Indian artifacts found there. The gift show has some of those artifacts on display such as Cherokee pottery, arrowheads, weapons, and jewelry.

The guide also mentions the finding of a giant Pleistocene jaguar remains deep inside the cave back in 1939. He mentions that this prehistoric cat measured 8 feet long, not counting the tail. It is believed that the animal got lost inside the cave some 20,000 years ago. The remains can be seen today at the American Museum of Natural History in New York. The gift shop has some plaster casts of the footprints that the jaguar left behind.

Jacob, being full of information, informed us of more interesting tidbits about the history of Craighead Caverns. When white settlers first came to the Tennessee Valley in the early 1800s, they discovered the cave and took advantage of its constant 58°F temperature. They stored their potatoes and other vegetables in there, using the cool cave as a giant refrigerator.

The Lost Sea Discovered
The giant underground lake was not discovered until 1905, though there were many rumors swirling before the discovery that there was a water source inside the cave. Ben Sands, an adventurous 13-year-old boy, found a small opening located nearly 300 feet below the surface. He crawled through the hole nearly 40 feet before he found knee deep water. The light from his small lantern was not enough to light up the sides of the opening. He threw mud balls in an attempt to reach the other side, but with no luck.

Ben returned to the surface to tell his parents of his discovery, but was quickly met with doubt. Finally a few weeks later, someone decided to crawl down there to verify his story. Unfortunately, when Ben took an adult down there, all the water had dwindled down to nothing more than a small puddle due to the drought the area was experiencing at the time.

It took Mr. Sands nearly 60 more years before he returned to the underground lake. It was during this time, the owners of the cave had blasted open the small crawl space Ben had found back in 1905 to reveal a magnificent body of water. Ben Sands in now credited with the discovery of the Lost Sea. 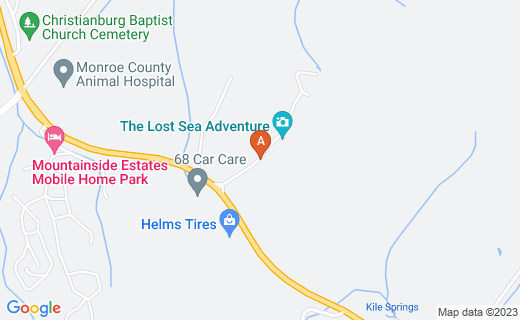 Seeing the Sea
When you reach the underground sea, it is breathtaking. The tour includes a glass-bottom boat ride through a four acre section of the lake which is spectacular. You get to see a large selection of Rainbow Trout that were put there years ago in an attempt to find where the lake emptied into. However, the trout had a much different idea. The fish stayed inside the cave and now solely depend on The Lost Sea tour guides for their food. The trout have to be restocked every 3-5 years because when they spawn, the eggs cannot stick to the side of the cave walls. The floating eggs are eaten up by the adult trout because they assume it is food.

The water is very calm and crystal clear. During the boat ride, you may get hit with a drop of water that is dripping off an ancient stalactite. It is believed that anyone who gets hit with a drop of that water is to expect good luck in the future. The deepest known part of the lake is 65 feet deep, but divers have discovered underground rooms beneath the lake that are filled with water. To date, 13 acres of water had been mapped out, but it's accepted that there is a lot more bodies of water that have yet to be discovered.

After the boat ride, you must walk back towards the entrance of the cave. This is the hard part. It's uphill nearly the whole way. Wear comfortable shoes if you chose to take this tour. I was not prepared, I wore flimsy Old Navy flip-flops to this little adventure and my feet and legs grew very angry with me. While I'm writing about being prepared, bring a camera with a good flash. There are some very dark places in this cave (obviously). There are lights throughout the cave, but there is not enough lights over the entire space. Some of the most beautiful features of the cave are not lit well. So, just ensure you have a proper camera for some great shots.

A few Pics from the Cave