The Magic of Seville

Mary and her husband work on international projects and have travelled to many places in Spain.

Over 2000 years old, Seville, this capital of Andalusia, is a vibrant city teeming with history that demands to be explored, understood and celebrated. Yes, celebration seems at the heart of this glorious city with its restaurants, cafes, museums and historical landmarks all adding magic to the place.

What is Magic about Seville

Seville's Old City Centre boasts of 3 Unesco World Heritage Sites: The Alcazar, the Cathedral, and the General Archives of the Indies which, in colonial times, housed the merchant's exchange of Seville and is now a repository of archival documents on the history of the Spanish Empire in the Americas and the Philippines.

Seville is truly one of Europe's great walking cities especially for Seniors who prefer flat ground. Even the great basilicas can become a bit bland after seeing dozens but Seville's Cathedral with the slashing sunlight through the stain glassed windows will waken the spirit of even jaded travellers.

The Alcazar is the perfect balance to the Cathedral adding the Moorish architecture and history that gave the city its magic. And over all of these, the silver of the New World paints a richness that is almost beyond belief.

On the other hand, there's a sense of peacefulness through the heart of the city growing from the beautiful gardens of Maria Luisa, the spaciousness of its cobbled streets and the whispering of the Guadalquivir River floating the massive history that is Seville's burden as well as its joy.

Seville seems to have leapt to life yesterday but in reality contains so much of the Western world's chaotic history: The Moors, Columbus, Ferdinand and Isabella, Cervantes, the banishment of the Jews and the Moors, the Inquisition, Colonial America, the Riches of the Indies, and the Discoveries and Explorations. Add to these, the Strutting Pomposity of Grandees, Corridas and Fiestas, Palaces and Basilicas. Add to that the famous flamenco and indeed you'll be transported to magic land.

Seville and Its Riches

Top Places to See in Seville

We arrived in Seville the week of Christmas and the city is at its shopping frenzy for last minute Christmas gifts. But when night came, it displayed its magic. The city was fully lighted with huge creatively designed lights unseen by us before. It was a treat as we just finished work in Buddhist country that does not go crazy about Christmas.

Every street in the centre of the city is magnificent with either huge stars or huge gifts in lights inviting tourists to stroll and peak at what it offers. Our senses were fully engaged as we strolled the streets and smelt the waffling of saffron laden dishes and honey coated sweets.

The Cathedral of Seville

1. The Cathedral of Seville

It was here that the Murascos and Marranos were baptized by bishops who simply went around sprinkling holy water and reciting the Sacrament. This, of course, was an act of folly as many converted out of fear but continued to secretly practice Islam. Let us delicately sidestep the Inquisition and its distressing memories.

The largest cathedral in the world and the third biggest Church, next to The Basilica of Our Lady of the Aparecida and St. Peter's Basilica, the Cathedral was declared a UNESCO World Heritage Site in 1987.

Built on the Almohad Mosque site, the Cathedral still retained two Moorish features: the Giralda which was once a minaret and is now a bell tower and the Moorish entrance to the Patio de los Naranjos.

Housed in Cathedral is the tomb of the famous explorer, Christopher Columbus. His remains were once in Havana where he died but during the Cuban crisis, they were transferred here. Also here lie the remains of Fernando III, who wove together a culture in which the Jewish, Moorish and Christian communities lived comfortably together.

Garden in the Alcazar

The Alcazar dazzled us well beyond our expectations. On first arrival, the Cathedral took our attention because of its flamboyant exterior and given the line up for The Alcazar, we decided to visit on another day early in the morning before the crowds arrived. The early morning decision was clearly the right one.

As you enter The Alcazar, you are immediately transported to the old Moorish world in Spain up to the 15th century when they're asked to convert or leave. With the christian take over, the Alcazar was expanded and today is really a network of palaces.

The Alcazar gardens were truly amazing. Following the Islamic architectural tradition. These are vast, replete with water fountains and ponds and beautifully laid out right in the middle of the city. If only the trees can speak, the tales of romance and intrigues, of power play and chivalry, of pains and sorrows would fill books.

Ferdinand and Isabella were married right in here and you can see the place where the wedding took place.

The Giralda and the Alcazar

Rising to 104.1 m., La Giralda is one of the most recognized symbols of Seville. Built as a Muslim Minaret in 1184 under architect Ahmad Ben Baso, it was completed on March 10, 1198.

When the Christians took over upon the completion of the Reconquista, this became the Cathedral's bell tower with a one-ton weather vane. It is also claimed that the famous mathematician and astronomer, Jabir ibn Aflah, was responsible for its design.

Watch the Semana Santa in Seville

A lively neighbourhood in the West bank of the Guadalquivir, Triana has developed its own character attracting tourists who like to experience the more quirky side of the city. This is where real people live while the Court popinjays fluttered about on the on the other side of the river. With its tile factory and traditional pottery, it is popular to souvenir hunters. But what makes it more mysterious are the legends around its name.

One story claims that this city was founded as a Roman colony by Emperor Trajan himself. Thus, the name. But others insist it is because of its being in the Guadalquivir which branches into three here. So, tri means 3 and ana which means river.

This neighbourhood dates back to its origin as a Roman colony. During the Muslim rule, it further developed around a Castle which became the first Church, San Jorge. This Church was also the seat of the Inquisition and still maintains today an Inquisition museum.

Many bull fighters and flamenco dancers lived in the area so it is appropriate that Triana's traditional gateway from the bridge is the Altozano square has its monument to the renowned bullfighter, Juan Belmonte and the flamenco arts. As well, bands of Gitanos used to live here in what was called Corrales. While this is no longer true, a few of these Corrales are now protected as part of Triana's cultural heritage.

Designed by Jean Claude Nicolas Forestier, the Parque de Maria Luisa with its half mile of gardens, pavilions, palms and ponds, fountains and beautifully stylized flower beds is an oasis in Seville.

In here, is the Plaza de España built for the Ibero-American exhibition in 1929. Mainly used as government offices now, its tiled Alcoves of the Provinces give a graphic description of Spain. The grand mansions built for this exhibition have now been made into museums containing Seville's archaeology collections. Do not miss this.

This is the only navigable river in Spain. In colonial times, it was very busy as the artery bringing the flow of riches to the heart of the great empire. Imagine the galleons leaving to decimate the New World and coming back with holds filled with silver and jewels.

A boat tour of this very significant river is really interesting. Not only will you see some of the monuments of the city from a different view but also give you a sense of how important is this river to the city and to Spain as a whole.

Certainly one of the most visited places in Seville, the Corrida hosts the regular bullfights which peak during the Feria de Abril and last till September. With its impressive Baroque façade, this Catedral del Toro accommodates 14,000 people and its acoustics allow for this number of people to hear everything wherever they're seated.

Coming back to Spain this year, I see that most of the bullfight rings like the one in Barcelona have been converted due to complaints around animal cruelty. We are moving on and one can nurture one's memories if the past has its allure. 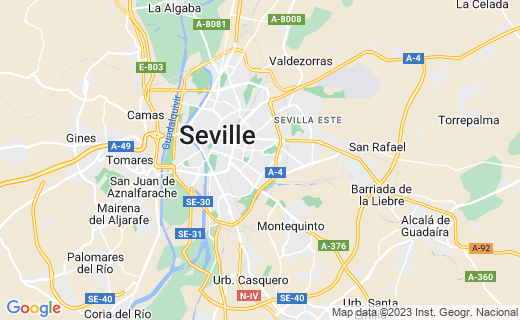 The Top Places to See in Seville

If you're only able to see one place in Seville, what would it be?

Entrance to the Alcazar

Other Interesting Facts about Seville

Seville's Riches Displayed in The Alcazar

What and Where to Eat in Seville

When you're in Spain, you can't but have the best tapas in the world. In Seville, to have a taste of this top Spanish favourite, go to Bar-Restaurante Eslava where you can enjoy with your cerveza (Spanish beer) lentil pottage with chorizo, baby hake, stuffed chicken, the white tiny, crunchy fish called pijotas fritos or any other items in their menu that take your palate. Another restaurant to sample tapas is the Vineria San Telmo in Paseo Catalina de Ribera 4 where you can order their Skyscraper. I will not tell you what's in it. Surprise yourself.

My other favourite Spanish delicacy is the Ceviche. In Nikkei Bar in Calle Calatrava, you can order this dish which they make from sea bass and octopus marinated in a spicy lemon sauce. You can also try their slow cooked egg with truffles.

If you're a meat eater, try the lamb chops with almond couscous in conTenedor in Calle San Luis.

For those of you who are more adventurous, try the stewed pig's cheek or the cockles with mini artichokes in Dos de Mayo, Plaza de la Gavidia.

Seville has so many restaurants to satisfy any palate but if you're like me, go to Corte Ingles (a supermarket) and ask for their best Jamon Iberico, Jamon Serrano, and Jamon Bellota. Buy these with their best Cerveza and enjoy an evening in your hotel room looking out at the bustling crowd in the streets.

Nowhere in the world is the Semana Santa (Holy Week/Easter) better celebrated than in Seville. Families, churches and neighbourhoods sponsor marvellous floats with life-size images of their favourite saints and biblical events. They city comes alive.

The Seville Fair begins two weeks after the Semana Santa. Officially, the Fair begins at midnight on Monday, and runs six days, on to the following Sunday. These days, Seville society parades in carriages and on horseback and put up casetas in the 1.2 sq.km. Real de la Feria (fairground). Casetas number up to 1000, mostly privately set up by the top families of the city and some companies. They entertain friends to lavish food and entertainment. Not to worry if you have no such eminent friends, there are public casetas as well. There are also bullfights every day, said to be the best in the country.

Will you recommend a visit to Seville?