The Maya Ruins of Palenque

The van sped along a paved road. Cows, rolling hills, and pastures provided picturesque views interrupted by the occasional billboard. The cows and pastures turned into trees as the road began to zig and zag. After no time, we rolled to a stop in the main parking lot as the merchants were preparing for the storm to soon follow. Not long after my arrival, bus load after bus load of tourists poured into the area around the main entrance. The calm before the storm was over, Palenque was open for business.

Situated just outside the town of Palenque (10 - 15 min. drive), this ancient city is located in the present day state of Chiapas, Mexico. Easily accessible from Mexico City and Cancun by bus or airplane. 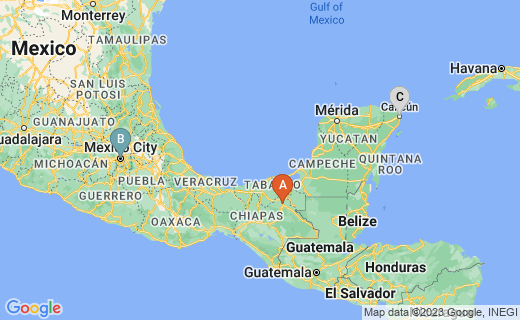 (The video below was uploaded to youtube by suurt.)

What did you think of the Palenque ruins when you were there?

As a means of reaching the Maya ruins, the town of Palenque is great. It offers a wide variety of hotels and restaurants for both budget travelers and those that have a little extra money to spend. Many of the hotels provide services to and from the ruins as well as a guided tour. If those services are unavailable, any number of tourist companies are easily accessible throughout the town.

The town serves as a great jumping point to reach other attractions around Chiapas such as: San Cristobal, Yaxchilán, Bonampak, and Agua Azul. 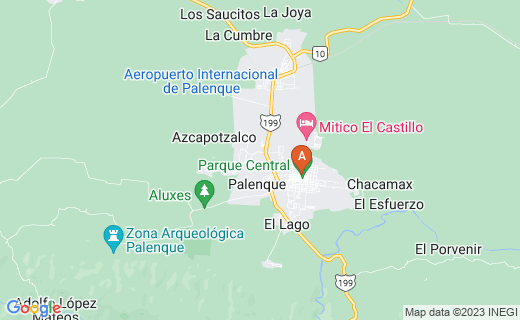 Palenque offers a vibrant view of nature and architecture. The surrounding jungle offers the sounds of a diverse bird population. The mountains and green foliage are interwoven between massive Maya temples, palaces, and housing complexes. Much of the ruins, aside from the main temple complexes, palace, and a few other places of social interaction (i.e. ball court), are found in the forest.

It is believed that at the pinnacle of Palenque, it encompassed a 128-plus square km (49-square miles) area. The "less" impressive ruins can be found by wondering around the numerous dirt paths that branch off from the main area. Sauntering around on the paths is a great way to explore the vast forest that encompasses Palenque. It also treats you to the numerous small streams, waterfalls, and other natural wonders of the National Park.

What attracts many tourists and archaeologists alike to these ruins are the impressive architectural remains of the Palacio, Templo de las Inscripciones, Templo del Sol, and Templo de la Cruz.

I spent the majority of my time around these ruins. This was in part because they could be quite a task climbing up, but mostly because the views they offer and the structures themselves are spectacular. Spending about 3 hours at Palenque, I could have seen more with a few extra hours. If you are pressed and/or don't want to spend that much time in one place, I strongly suggest at least crossing these places off your list.

Your admission into the ruins also includes the museum. Situated not far from the exit, the museum holds replicated and authentic artifacts found from the various archaeological excavations over the years. There is little place to eat and a gift shop as well.

The artifacts found in the museum consist of items used everyday. These items include, but are not limited to, ceramic bowls and stone tools, thrones from the Palacio, and a replica of the Pakal tomb. It is not a very big museum, but displays some great pieces recovered from the ancient city.

As with many museums, you have to check your bag in at a counter. They will give you a number and place your bag in the corresponding cubby. I never had any problems with this, but I would not suggest storing any valuable items or money in your checked baggage.

Many people in Palenque Town speak English. So, if your Spanish is rusty or non-existant, no worries. Many of the hotel workers and tourist businesses offer information and tours in English.

I personally didn't take a tour, but someone I know did. They set it up through their hotel. She said it was around 200 pesos (~ $15 US), but took her to Palenque, Agua Azul, and one other place. The bus departed the hotel parking lot around 8 a.m. and returned around 7 p.m. They stopped for an hour or two at a restaurant for a lunch break. The fee only covered the travel to and from the various tourist locations. Lunch and entering the sites was extra. So, if your looking for a guided tour I would expect to pay more than 200 pesos. However, if you did not book a tour (as I did not) you will need to find a way to get to and from the ruins.

I first went to a taxi kiosk by the zócalo. His price, after a bit of talking, was 80 pesos (~ $6 US). I declined the offer and walked around some more. Eventually I stumbled upon a van transportation service. The price was 10 pesos (less than $1 US). I was dropped off at the main entrance and picked a ride up back into town from the museum.

It should also be noted that if you try and access the ruins in your own vehicle, bike or by walking (potentially in a cab) you will be charged an additional fee to enter the National Park. Not sure what it was because I did not have to pay. To avoid this fee, I would suggest finding one of the van services. For tours, the fee is probably added on to the cost.

The vendors can be found both outside and inside the archaeological site. Depending upon what you are looking to get out of your experience, these merchants can be good or bad. For me, they were great because I was always looking for an opportunity to practice my Spanish. For the most part, they are all willing to talk and tell you their story. I would take most, if not all, they have to say with a grain of salt, but it provides great entertainment and a good way to practice the language. They also sell some great and others not so great crafted pieces.

Meet People From Around the World

While visiting Palenque, I met people from all around the world. Three of the more notable people were a couple from Alaska biking around Mexico and a guy that played professional soccer for the Jaguares de Chiapas. Whether your a person traveling by themselves or not, this can be a great way to share thoughts and ideas on places to visit at Palenque and in the surrounding area. Also, they were great for the many moments when I needed to catch my breath.

The burial chamber of Pakal, located inside the Templo de las Inscripciones, is open with limited access or not at all to the public. One of my guidebooks told me that the burial chamber had limited access to people that arrived early and obtained a permit. However, a reliable person I was down with in Mexico (he knows someone that works at Palenque), said it was not open to the public. Either way, I would not expect to visit the inside of the chamber. The museum does offer a replica of what the tomb looks like.

On top of the fee to enter the ruins, which was 57 pesos (~ $4.50 US), there is a fee to take pictures. This is common at many archaeological sites as well as museums. I don't remember the exact price, but want to say it was around 20 pesos (~ $1.50 US). It wasn't a back breaker, but for a person traveling on budget it was an extremely annoying extra expense.

As previously noted under "The Good", vendors can be great. However, where they do have good aspects, it seems to always come at a cost. For me, I spent some time talking with a lady selling items inside the ruins. After 10 - 15 minutes, I left. My departure without a purchase left the lady visibly angry as she let fly some expletives. Feeling awful about taking up the ladies time, I returned to buy something. I had spoken and spent time with other vendors without a purchase. Either way, this lady got what she wanted and played her cards very nicely.

Vendors also have a tendency to stop traffic and create large groups of people. This can be extremely problematic if you are in a hurry or just don't want to be bothered by someone selling you the same thing the last person was offering.

I love seeing pictures in guidebooks and online of ruins with no other living soul around. Clearly these times are arranged between the photographers and the site, but still, it would be nice to think waking up early will at least help out. It does, but not for long. Crowds flow in literally by the bus loads.

I arrived when the site first opened at 8 a.m. Luckily for me, I was one of the first people through the main entrance. Some of my pictures have few tourists and vendors in them.

Make sure you bring water and some snacks. I would also suggest bringing a water purifying method of your choice. The numerous streams provide a great source of fresh water. I took a water bottle that had a built in water filtration system.

I consider myself a very physically fit person that exercises 5 days a week. I will not lie, I was tierd after spending 3 hours walking around Palenque. There are a few factors that play into this: distance traveled and height of temples.

Some of the temples you will encounter, such as Templo de las Inscripciones, Templo de la Calavera, and Templo de la Cruz, can be very hard to climb up. The steps can be high and narrow. Problems may arise if someone is terrified of heights as moving up and down the less than perfect staircases could be unnerving. I personally am not a fan of heights, but didn't find it troubling.

As previously mentioned, the site is enormous. Much of it is in the woods and untouched by archaeologists. Depending on how adventurous you are and how much time available to spend on site, many hours could be passed wondering around the paths in the woods. Remember, the area around Palenque is also hilly, so not only will distance be a factor, but so are inclines. I don't recall climbing any enormous mountains. However, there were a number of smaller hills.

My Rating for Palenque

5 stars for Maya Ruins of Palenque

Overall, Palenque is a must see for anyone that enjoys learning about history, culture, and architecture. The pros far out weigh the cons as experiencing these ruins will create a memory that will last a lifetime.

Whether you spend 30 minutes or all day at Palenque, I guarantee you will find something of interest. Maybe it will be one of the many travelers you meet, a vendor that shared a story with you, the beauty of the surrounding nature, the architecture of the ancient buildings, or just the idea of being in a place that has been around for 2,000 years.

(The video below was uploaded to youtube by NationalGeographic.)