The Maypole of Fredericksburg, Texas

gmarquardt has an M.A. in history and German from SWTSU and has over 25 years teaching experience at public high schools.

The maypole, (Maibaum in German), has many historical roots and traditions behind it, and is mostly, but not one hundred percent, part of Germanic culture. Norwegian and Swedish cities have maypoles, but in both Germany and Austria the maypole can trace its roots back to approximately the 1500s. Consisting of a large pole or an actual tree, they are usually erected on May 1st. As the maypole is put in the village square, the town has a ceremony or festival marking the occasion. During the festival, the maypole may be decorated with streamers and symbols. Even today Bavaria has traditional maypole celebrations, and as most things Bavarian, there is usually much celebrating by the local townspeople deep into the night. Each country, and each region have their own traditions and customs in raising, decorating ,maintaining and the eventual removal of maypoles.

However, some cities keep their maypoles up all year. Munich has a very large Maibaum in the middle of the Viktualienmarkt, an old market from the 1800s. Often in the center of important markets or parks, traditional dances and folkloric events take place here, with the maypole acting as a center piece for the event. And in Fredericksburg, Texas, they take there German heritage to heart as they also have Maibaum which stays in their Marktplatz all year long.

In addition to a celebration during the raising of the Maibaum, each pole has a unique set of decorations that illustrate the history, culture, customs and industry of the region. The Fredericksburg Maibaum is not an exception. Starting from the bottom and working its way up, one can see the general history and culture of Fredericksburg, Texas.

The bottom row consists of pioneer settlers, principally John Meusebach negotiating the Meusebach-Comanche Treaty with the local Comanche tribe leaders. This treaty became one of the most important documents of German-Texan history. The treaty never took away any land nor the rights of the Native Americans and stated that the Comanche and the settlers were to live in harmony and peace. Unique in American history, this treaty is perhaps the only treaty ratified with Native Americans that was never broken. The Indians helped teach the Germans the ways of the land, while the settlers helped the Indians by supplying goods and materials with the assistance of nearby Fort Martin Scott.

The next level up illustrates the settlers and their roots. On one side is a cowboy throwing a lasso on some unseen target. German settlers became ranchers and worked with both sheep and cows, and had to have plenty of that Texas grit so necessary to survive. Constant toil combined with a deep work ethic contributed to the growth and development of Fredericksburg. On the opposite side, a familial group of settlers are dancing, wearing traditional Lederhosen and Dirndel, as well as a man’s suit, symbolizing the prosperity of their town.

Do you know of a maypole in the United States? 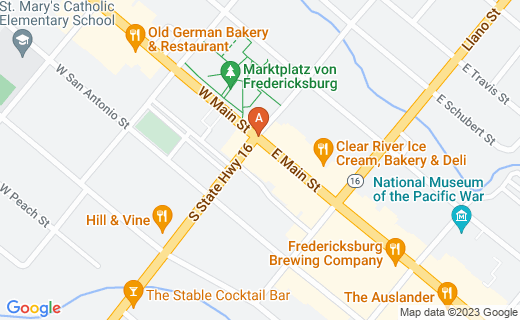 Marktplatz, home of the Fredericksburg Maibaum.

The next level illustrates the bounty that came from the hard work of the settlers. The land of the hill country produces plenty of food, and the German settlers learned to adopt their new crops with their old world traditions. One on side, a female collects grapes, most certainly wild Mustang grapes that was often turned in to wine. On the other side, peaches are harvested in a large wheelbarrow. In fact, peaches are Fredericksburg’s largest crop today.

On the next tier, the bountiful wildlife that populates the area is represented. Wild turkeys and deer, which are very populous in the Hill Country, are seen grazing in the wild. Moreover, settlers appear but have now become hunters and are dressed in camouflage with modern rifles. Hunting is still very popular in this part of Texas, and not a few decedents of these settlers still maintain a diet of mostly venison and the occasional turkey.

Combining both what the land could produce and domesticated animals, the next level has two types of farm animals represented. On one side are two types of sheep, an Angora as well as an Hampshire sheep. On the other side are three cows. All of the animals were important to the settlement of the Texas Hill Country, providing butter, cheese, meat and wool. In fact, Mohair and wool were an important good traded at nearby San Antonio and kept Fredericksburg and much of the Hill Country prosperous. In most places in the Hill Country, sheep outnumbered cattle by a number of ten to one.

The next level up shows the immigrant and their methods of reaching Fredericksburg. Both a sailing vessel as well as an ox cart is shown. All German settlers reached the United States or Texas by sailboat, a voyage that often took six months. Many landed in Gaveston and then continued on horseback or oxcart to Fredericksburg.

The next level shows the importance of German architecture on the settling of Fredericksburg. Both the important Nimitz Hotel, founded by Admiral Chester Nimitz’s Grandfather, it soon became an icon of Fredericksburg. Today, it hosts the nathional Pacific War Museum. In addition, typical German settlers homes are illustrated, a type of homestead unique to the Hill Country. Made of limestone, the homes often have Fachwerk style lattice throughout the frame. To save space inside the home, the stairs are usually put outside the house, so a two story home is unique in the fact that the top story is quite separate from the bottom story. As my step-mother once plainly stated, "Great place for the children!"

The top of the Maibaum is reserved for two of Fredericksburg’s famous religious areas. First, the Verein’s Kirche, which was an octaganol church that originally was placed directly in the center of town. Not only was it the center of social life in Fredericksburg, but it was designed to be easily defended against any possible Comanche attacks. The large hill with the cross on the top refers to what the locals call Kreuzberg, or Cross Mountain. First noticed by the famed geologist Roemer, a timber cross was found on the hilltop suggesting that Spanish missionaries used it as a landmark on the path from San Antonio to San Saba. Purchased by John Christian Durst in 1847, he named it Kreuzberg and used it in the traditional German manner of Easter fires. Easter fires were used to burn away old growth and make way for new, but it also commemorated the Meusebach Commanche Treaty. Today, Easter fires are lit by the descendants to commemorate both German tradition and Texas lore.

The Maibaum is a Germanic cultural icon that is the center of many traditional events. The citizens of Fredericksburg, Texas raised their maypole in 1991 to keep their German roots alive and to respect and honor their German heritage.