A Tour Through The Mob Museum In Las Vegas Is Well Worth The Trip!

I Saw Nothing At The Mob Museum

The historic former federal building and former Post Office in downtown Las Vegas is now home to the Mob Museum. It provides visitors as well as locals a very interesting afternoon learning about the Mob and its influence here in Las Vegas, as well as all over the United States. Just don't ever admit to seeing anything there.

On the way out, visitors can even stop at the museum store and pick up a t-shirt that says "I Saw Nothing At The Mob Museum." Because, after all, we wouldn't want to have to become part of the witness protection program after our visit here and start all over again, now would we?

The building in which the Mob Museum is now located once played a large part in the history of the mob. After all, this is the building where one of the fourteen famous Kefauver hearings on organized crime was held in 1950. The museum is located at 300 Stewart Avenue in downtown Las Vegas.

The museum itself makes an attempt to discover "the truth, the whole truth, and nothing but the truth." They very effectively present both sides of the dealings of organized crime. Visitors can learn about the crimes themselves that were committed, and the law enforcement officials who had an extremely tough job attempting to control the mob and eventually to eradicate it's influence from Las Vegas.

The interactive exhibits will keep one fascinated throughout the tour, as well as the artifacts displayed throughout the museum. The high tech theater presentations are also a wonderful touch. This museum features an eclectic mix of morbid artifacts, along with other artifacts representing the glamor that was present back in the early days of Las Vegas.

The tour of the museum begins on the third floor, after taking an interesting elevator ride in an elevator reminiscent of the 1930's... including a real spinning dial on top of the elevator showing what floor the elevator is on. The architecture of this building is amazing, and it has been lovingly and nicely restored prior to the museum being located here.

In the beginning of the tour, you will walk into a "lineup" because, of course, you are now a "suspect." And one of the very nice museum staff members will even offer to take your picture as you are in the line-up. I have to admit, I have never stood in a REAL "line-up" before, and that's the truth, the whole truth, and nothing but the truth!

It was interesting. You stand on footprints on the floor, backed up to measurements of your current height (which I am actually surprised I'm still over five feet tall ~ I thought I was a little shorter now). And where you are standing is in front of a one way mirror... people can then identify you as a suspect in the "crime" - they are shielded from your view, but they can see you.

From there, you walk through rooms to start viewing the interactive displays, short films, and to begin learning about the fascinating history of organized crime in America. How it came to be is covered very well, immigration being a huge factor, as well as Prohibition playing a critical role in the early days. In later years, the mob was a part of sports betting, horse race betting and other forms of gambling as well as many other lucrative enterprises.

Visitors can learn about the biggest names in the mob, such as Al Capone, Meyer Lansky, Charlie "Lucky" Luciano, Dion O'Bannion, Bugsy Siegel, Joe Bonnano, Sam Giancana, and John Gotti. This museum is also working with the FBI and has worked closely with other undercover agents who have made their careers out of fighting the mob.

In addition to the mob artifacts, visitors can see the artifacts from the early days of law enforcement. Law enforcement was often out-manned and out-weaponed by the mob. You can see the weapons used by law enforcement, as well as interesting displays of toys for young children that they could use to pretend to be on the side of the law. There are a large variety of weapons on display, as well as tapes, wire tapping tools, crime scene photos and more.

In addition, visitors can see a piece of the wall from the Chicago warehouse where the St. Valentine's day massacre occurred in which seven mobsters were killed from George "Bugs" Moran's gang. They were killed by members of Al Capone's gang, by "thugs" that had dressed themselves as police officers. The wall is a rather graphic reminder, including the bullet holes, of how very violent life was as a mafia or mob member.

And the barber chair where Albert Anastasia was murdered is also on display, letting visitors know that violence occurred in just about any place, whether the place was public or private didn't seem to make much of a difference. If a "hit" was ordered, it was carried out, by any means necessary, and any where possible.

Visitors to the museum can also "shoot" a real Tommy gun, sound effects and all. It was especially amusing to see women holding handbags trying to shoot this Tommy gun... scary and amusing at the same time! And yes, they DID "shoot like girls."

Another rather graphic display is the electric chair that was located in Sing Sing prison, in which 614 people actually died while seated in that same chair. Very graphic, and I thought it was somewhat disturbing that little kids were treating it as a Disney attraction "Mom! Take a picture of ME in the electric chair." I'm thinking if Mom had stopped to read that 614 people actually lost their lives in that chair, they would not have been as quick to treat it as a "toy" or a Disneyesque type "ride" (for lack of a better word).

I honestly think they should have the sign explaining its history in a more prominent position than behind the chair, have the sign out front so people will think twice about wanting pictures of themselves sitting in that thing! Personally, looking at it gave me goosebumps.

Visitors are emotionally torn between a sense of fascination and a disgust created by viewing the graphic displays and especially the photos of crime scenes where mobsters were found murdered. Probably one of the most vile pieces is the picture of Bruno Facciola's murder in New York City in 1990. He was shot in both eyes, stabbed, and someone had put a dead canary IN his mouth (signifying that he was a "canary" that had "sung" to law enforcement.)

Another particularly graphic photo is of Bugsy Siegel. He was brutally shot in his girlfriend's apartment in California on a visit there. Shot in the eye as well, the picture will leave an imprint in your mind. And the reason he was killed? In the process of building the Flamingo hotel here in Las Vegas, the mob thought that he was siphoning funds off the top during the hotel's construction because it was "costing too much" to build the casino. If there is one thing that was never done, it was taking money from the mob. Brutality was the norm and often used as "punishment" in the world of the Mafia. Guys were made to be examples of what could happen if one were to cross the Mafia.

But then again, on the other side of the spectrum, there is an exhibit displaying the family photos of Mafia (Mob) members with their families, and they look in those photos just like normal families. Celebrating weddings, baptisms, and other family events, they hardly appeared to be much different from most families out there... except for the "career" that Dad was involved in. I have a feeling that wasn't discussed much if at all in those homes.

And in other parts of the museum, one can see the celebratory and innocent side of Las Vegas, pictures of Elvis and Liberace smiling for the camera... pictures of mobsters hanging out with celebrities in the casinos in the 1950's. It must have been quite a sight back then! And in another fun display, visitors can see some of the "kitschy" memorabilia from the early days of the Las Vegas casinos. There was a certain "innocence" to those days.

Glamorous film stars hob-nobbing with gangsters... sounds like something out of the movies, right? There is also a display for THAT as well! There have been many mob movies made over the years, and there is an entire section of the museum devoted to that aspect.

There is one section of the museum that I found especially thought provoking, and that was the area that showed the side of those that believe that there was a "conspiracy theory" in the death of John F. Kennedy. That somehow his killing, as well as the killing of his assassin, Lee Harvey Oswald were both somehow mob related. Whether you believe in this or not, this display does really make you think and reflect upon that possibility.

And I believe that is one of the best aspects of this museum, to make you realize what happened back in the early history of the United States, and how these events helped to eventually shape the United States that we live in today. The displays in the Mob Museum here in Las Vegas make you think and ponder the way things were back then, and why those days are not exactly all "good old days."

One of the mobsters was quoted as saying that the mob was "Bigger than U.S. Steel" and I have a feeling he might have been right about that. I cannot imagine the extremely tough and seemingly insurmountable job the Law Enforcement authorities were facing back then. Not only were they outnumbered by criminals, they were effectively "out-weaponed" as well by them.

After many years, law enforcement was finally able to get things under control... or did they? I guess that's another thing for visitors to ponder as they leave the museum... are the days of the mob really over? Or is it still going on, but just more well hidden than it was back then?

I think the Chicago mob boss Tony Accardo may have summed it up the best when he answered the question "How did Las Vegas fare in the Mob years?" His answer was simply "We don't want no blood there.... it's bad for tourist business."

The Mob Museum In Las Vegas ~ It's Time To Rethink What You Think You Know.... 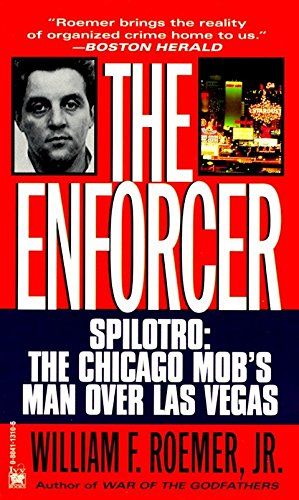 Vegas and the Mob
Buy Now

Cosa Nostra: A History of the Sicilian Mafia
Buy Now