The author is a photographer, writer, and expatriate who resides in the heart of Provence.

Remember, all of man's happiness is in the little valleys. Tiny little ones. Small enough to call from one side to the other.

Alpes-de-Haute-Provence is one of six departments within the French region of Provence. The ancient land steeps in a rich multi-cultural history, dating back to the Neolithic Era from whence several civilizations rose to power. Beginning with the mysterious Celts, and followed by the Roman Empire, and then eventually, the Germanic barbarians, the Merovingians, the Franks, and the Sacarens.

It's no wonder that so many cultural legends remain amongst the hill and valley people of this majestic provençal region. One of those timeworn tales, in particular, stands out. A medieval chivalric story about a beautiful maiden, her dashing vengeful betrothed, and his covetous rival, a village fool whose name stood doomed to haunt a lonely mountainous stretch forevermore.

A Timeworn Tale of Romance

As the legend goes, Mademoiselle Laure was the village’s most beautiful woman. Long, dark hair, and entrancing eyes. Every man who visited the Rooster’s Inn, young enough or widowed enough, had fallen in love with the daughter of the hotelier, the alluring Laure.

One of those infatuated men, Imbert whom already obese and past his prime whom most considered the village oaf, had fallen in love with the winsome maiden. Every single day, Imbert made it his mission to visit the inn and declare his love for Laurie. Unbeknownst to the fool Imbert, his object of affection had eyes for only one man. Audifred de Montmaur, a young knight and nephew of a great Lord from the high Alps who had visited the Inn.

From that day forth, Laure and Audifred entered courtship, and the knight won the hand of a hotelier’s daughter.

A Lover's Retribution Close at Hand

Imbert who had since seethed with rage, plotted his revenge, and kidnapped the beautiful Laure on their wedding day. With the help of a few scoundrels, he absconded the married woman away to the high forest where he hid the Madame in a farmhouse. For three days, Laure fought off the crazed man’s advances. Imbert had become impatient and determined to claim Laure for himself.

In the meantime, Audifred surged with vengeance while beside himself with worry for his love. As soon as he received word of Imbert’s whereabouts, the young knight rode up the mountain pass, prepared to battle the blackguard Imbert for his rightful claim to his wife, Laure. When he arrived, Audifred heard Laure’s cries for help and called out the dastardly Imbert. The town oaff felt pressed to show Laure that he did not fear the regarded knight, and went out to face his nemesis.

The battle for the love of Laure started.

Laure who escaped the farmhouse with cutlery knife in hand, waylaid Imbert while the cumbersome man lunged his weapon at Audifred, plunging a knife deep in his back. There, Imbert fell to the ground. The next morning, villagers found his body on that high forest road and hence, the legend remains and known as … La Mort D’Imbert

Behind the Ancient Legend

The romantic adventure-story is retold from an excerpt in the “Athenaeum of Forcalquier” written by Eugène Plauchud, a pharmacist and poet (1831 – 1909) who lived and studied in the Ville de Forcalquier. Hence, the famed provencal writer and poet gave colorful life to a lonely sleepy stretch of mountainous scenic road. Beginning at the tail-end of the town of Manosque, the byway twists and turns up through the Pélicier Forest, reaching its grand peak at 591m where marked as the Death Pass of Imbert before descending to the small village of Dauphin.

One might find it interesting that few locals of Manosque actually know about the story behind the name of their famous twist of mountain road. Even though La Mort D’Imbert is a fictitious legend, the actual meaning behind the ill-famed roadway most likely comes from an account of a Forcalquier merchant named Imbert who after returning from the fair of Manosque found himself robbed and murdered at this pass in 1163 AD. 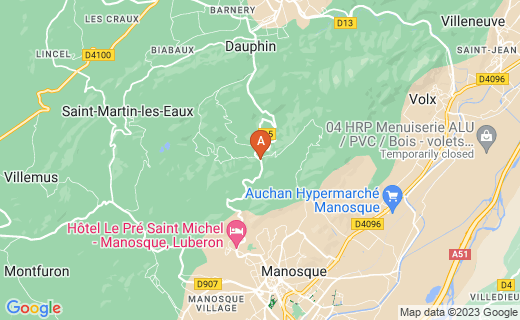 Other Adventures to Explore in Alpes-de-Haute-Provence

Aside from the lonely winding stretch of the Death Pass of Imbert, if you’re planning a vacation to the Alpes-de-Haute-Provence then there’s so much more to explore. Whether the ancient Villé of Forcalquier or bustling Manosque, the birthplace of the famed writer Jean Giono, or the rolling lavender fields of nearby Valensole - the trip and these noted locations are well worth the time and effort. Haled as the heart of Provence, this quaint countryside touts a memorable experience not to forget.