Famous Historical Battlefields of Europe: The Ossuary at Solferino in Italy.

The Ossuary at Solferino

On the 24th June 1859 the French army, led by Napoleon III fought against the Austrian army.

The latter were led by Franz Joseph on the fields of Solferino in Northern Italy.

Nearby is the popular Lake Garda which nowadays is frequented by millionaire playboys and glamorous ladies of the fashionista jet-set. The summer months shine down on sports-cars on the roads and speedboats on the lake while the picturesque lakeside towns are thronged with tourists.

It is truly one of the jewels of Italy with many delights and attractions in modern times. But on that day in the 19th century the nearby fields lay witness to the horror of war.

Battle also took place at nearby San Martino which involved troops of the Piedmontese army who were allied with the Austrians. Overall around 280,000 soldiers engaged in the conflict on that fateful day.

On the 24th June 2009, the 150th anniversary took place with delegations from Italy, France and Austria attending to remember the war dead. 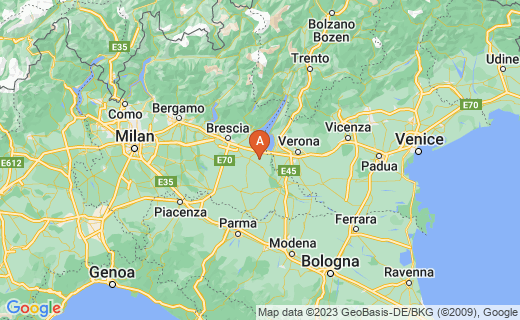 I eventually visited the site of the battlefield a few weeks later and my first port of call on this historical pilgrimage was the Ossuary in the Church of San Pietro just at the start of Solferino, wherein contains the remains of around 7,000 soldiers killed in the battle. A quite moving and sobering experience it was too as I entered the cool dark interior of the the church.

Initially nothing seemed unusual on entering as it just seemed like the normal insides of an old church. But then I advanced forward and my eyes quickly become accustomed to the light. I saw a truly macabre scene that I will always remember.

Behind an altar with a huge dark wooden cross is a curved semi-circular wall decorated with the skulls of the dead. I made a rough count of around 2,000 of them lined up in ranks on shelves contained behind caged screens from the floor almost to the ceiling.

Not only that but there were innumerable limbs and other bones neatly placed everywhere all over the church walls. It seemed like every inch was covered in human remains. The legacy of the dead completely surrounded me.

Arms, legs, hands, feet, hip-joints, shoulder blades etc were all carefully arranged in a dramatic exposition of the mortality and frailty of humankind. I was alone in the Ossuary, alone with my thoughts and gazing in disbelief as I walked around the altar. I felt like I was treading the boards of a lonely stage addressing an audience of the dead.

They were all grinning at me as if to say "this is what awaits you my good friend" or smiling in defiance at the futility and destruction of the terrible slaughter.

It struck me how similar the skulls looked to each other, soldiers in uniformity even in the afterlife. Death is indeed the great leveler and no respecter of status or nationality as underneath the skin we are all the same. I was reminded of a quote by Carl Sagan who once said:

"An extraterrestrial visitor examining the differences among human societies would find those differences trivial compared to the similarities.... We are all one species"

An even more dramatic surprise awaited me before I left when I turned to the side to look into a small ante-room. There were shelves upon shelves of more bones stacked up high but in the middle were two full human skeletons standing upright and staring out at me through the caged door.

It was as if they were sentries placed there on duty, standing perpetually to attention in order to guard the shattered remains of their comrades in arms.

It was an unsettling and eerie experience.

The remnants of the dead remind you so much that you should enjoy life and respect the fact that you have a life. Many people had that taken from them by greater powers who perhaps did not value their existence.

I got up close and personal with my silent audience and stood staring for several minutes into individual skulls thinking to myself "What was your story?"gazing into those empty eye sockets.

Some had bullet holes in the head of course, perhaps mercifully despatched without suffering the pain and anguish of the many thousands of the dying and wounded who lay on the battlefield.

They were all someone's son as the cliché says, many of them fathers but It's humbling to consider that every one was someone's child, brother, spouse, or lover.

This was because he was so appalled by the human suffering inflicted in the carnage. Between the two battlefields almost 10,000 were killed and around 20,000 wounded. Many of the latter suffered terribly through lack of treatment and help for their horrendous wounds.

The monument was built in 1959 on the hundredth anniversary of the battle and contains marble slabs placed in the wall. These bear the names of nations adhering to the Geneva Convention.

Unfortunately I couldn't help feeling the urge to extract not a few of them out of the wall considering the hypocrisy of some particular countries in recent years. I will name no names.

I would have liked to say that I spent a peaceful time up there but the solemnity and gravity of the atmosphere was shattered by the deafening racket from a multitude of crickets up in the trees.

Even in the Ossuary there was little peace from flies buzzing around although this is perhaps cruelly ironic among the dead of battle 150 years later. Outside there were very few birds in the air I noticed. It could have just been a coincidence of course but people do say that birds will stay away from areas where death has occurred. You never know.

The Tower at San Martino

On the second part of my battlefield pilgrimage I went to nearby San Martino, only a few miles distance from Solferino. This was where the Peidmontese Army fought against the Austrians on the same day that battle took place at Solferino. San Martino has an Ossuary too but it is much less significant or influential than the other one.

However it does have an impressive tower which can be scaled, from the inside, up a long, spiraling ramp. It is 70m high and was built in 1893 in dedication to Victor Emmanuelle, King of Piedmont and who became the first King of a united Italy in 1861.

There were very impressive paintings on the walls viewed from the ground floor with it's female figures painted on the domed ceiling. They were depicted in perfect perspective which made them appear to be glowering down at you in apparent three-dimensional judgement.

Then as you ascended the tower there were various colourful and dramatic frescoes on display. I was particularly impressed by the frescoes as they were battlefield scenes painted on curved walls which gave the feeling that you were entering within the painting as you walked along.

There were various depictions of battles of the 'Risorgimento', the movement to unify Italy and featuring the iconic figure of Garibaldi, national hero and forever associated with the struggle for Italian independence.

Of course they were heavily sanitised versions of what really occurs in battle. But nevertheless they did portray some human suffering of the ordinary men who fought and died albeit with their bodies intact and the merest trickle of blood flowing from their prostrate forms.

At least they were more honest depictions than the nearby portraits of the officer class. Those be-whiskered gentry class in their carnival regalia sitting astride their trusty steeds in some artists studio was in stark contrast.

After the tower I went over to the museum building and looked around at the various artifacts and two artillery pieces positioned in the centre of the floor.

Although all the information is in Italian it was still a worthwhile experience to see at first hand the uniforms, flags, swords and personal belongings of soldiers who fought at the two battles.

However there was audio equipment available that explained the story of the conflict in English, French and German. Perhaps quite appropriate given the international composition of the armies of that time and the subsequent legacy of the Red Cross movement across the world.

It was a fascinating experience to visit these monuments of remembrance, not out of morbid reasons or the dark appeal of the macabre. It was for me personally a disturbing but worthwhile experience in which to reassess my perspective on life, on humanity and the world.

The museums are a respectful and fitting tribute to the ultimate sacrifice that many gave on that terrible day in history. 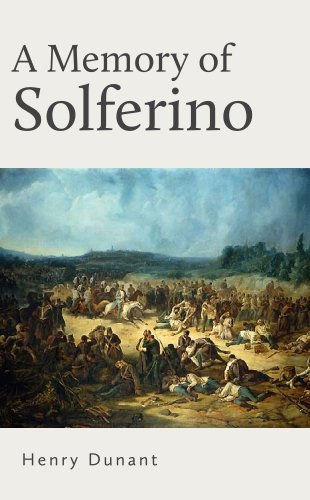 A Memory of Solferino
Buy Now