The Perseverance of Inca Traditions in Saraguro, Ecuador

Inca and Saraguro history at a glance

In acordance to oral customs and cultural inheritance, the Saraguro people were relocated from other areas, like Colla, Lake Titicaca and Cuzco, to the now southern region of Ecuador, after being conquered by the Inca empire in the 1460s. This diversification process of moving people around, used by the Incas, had the purpose of scattering any possible resistance or opposition to their dominion; this population control policy was called mitma.

Since then, Saraguros have maintaned control over their territories during the ocupation of the region by the Spanish Empire and the subsequent Republic of Ecuador. Nowadays, they still celebrate their Inca heritage with the now traditional black clothing, a symbol of their mourning of the death of the Inca Emperor Atahualpa and, as a result, the end of the Inca empire. Likewise, other Inca traditions and customs are still being preserved.

"And we, your children now, an idyll of love and hopes we sing, with firm strength, in augury of immortal bliss. "

Lyrics to the Saraguro Anthem

Journeying in these south regions of Ecuador, you can find Maria Rosa Cango's workshop of traditional handcrafted artifacts. This almost hidden atelier is located in a narrow alley that leads to a small square located in the middle of Saraguro town. Here, this talented Saraguro artisan weaves warm clothing made with sheep's wool for the cold climate. In addition, she also creates elaborated necklaces made of colored glass beads to sell to visting customers.

The Saraguro women use these traditional necklaces regularly and in special occasions; this artisanship is mostly applied by the women, eventhough some men are also talented artisans. Maria Rosa reveals that one of her more diligent work was a necklace representing the shape and colors of the peacock, an animal known for its elegance and varied and vivid colors.

Historically, the necklaces made in the seventies were created with a constant basic pattern, and would vary depending on the number of columns and color combinations. After the 1980s, new patterns and styles were created. At present, the Saraguro people create bracelets and collars with a style known as lagarto (lizard), that can be used by both genders.

Nevertheless, the hats and ponchos made with sheep wool are considered the more traditional and representative aspect of their culture, according to Cango. This community in constant mouring, would customarily wear very heavy black and white hats made from sheep wool with a wide brim. Even though other styles of headwear have replaced these, the traditional heavy hat is still being used during special ocassions and can still be seen in the region.

Ever since she was a child, Maria Rosa has been taught how to spin and weave to sell their craft. Today, she invites tourists around the world interested in her culture to visit this land that represents a continuation of incan culture and tradition found in southern Ecuador.

A map and location of Saraguro 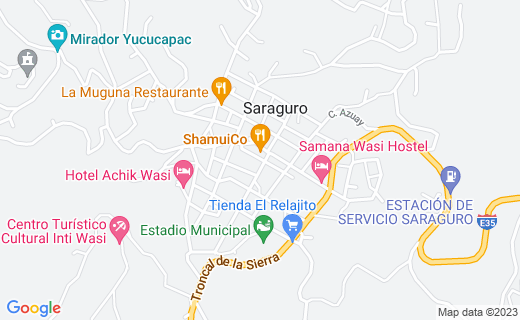 Would you visit this small town of Saraguro during your travel to South America?