The Poor Man's Bucket List: Because Not All of Us Can Afford Paris

-“You have to go see the Eiffel Tower”

-“The Leaning Tower of Pisa is amazing”

-“Niagara Falls is the most beautiful place on Earth!”

Okay National Geographic, we get it. You’re rich and can visit every depth of this planet, but here in the real world - we can barely afford the plane ticket.

I think we all have this mental list of all the things we want to do before we ‘kick the bucket’ that usually consists of spending large amounts of money we will never actually have.

So, I wanted to share a more realistic list of things you should really experience in your lifetime. I'm going to be pretty specific to Florida because that's where I live, but you can probably find all of these in your area!

That was pretty much my dialogue as I was rising into the air behind the boat.

The thrill you get when you’re flying through the air like that is amazing. It is so quiet up there, all you hear is the wind (and probably your own screams). But when you finally calm down, it is actually really peaceful. The view is gorgeous and the whole experience is invigorating!

If you're in the Keys and feel like having a whole day of excitement, Sunset Watersports has an amazing Do it All package that is definitely worth the $139!

In addition to the panic-inducing parasailing, there's 13 other activities that will make your day amazing:

What is life without a little bit of laughter?

Sure there's comedy shows you can go to, but a Drag Show? -It's like nothing you've ever seen before!

Most of it is extremely awkward and pretty much all of it is inappropriate, but that's what makes it so hilarious.

They are the craziest bunch of women you will ever see and they love to shock the audience with their vulgar behavior and funny jokes.

Oh but a word of advice - be careful if you bring your boyfriend/girlfriend there. I did once and she got very jealous when I was making out with him instead of paying attention to her. She actually slapped him for it!

I've been to a few good Drag Shows but the best one by far was Aqua Nightclub in Key West.

It's right there in the middle of all the downtown action and is the funniest one I've seen yet! 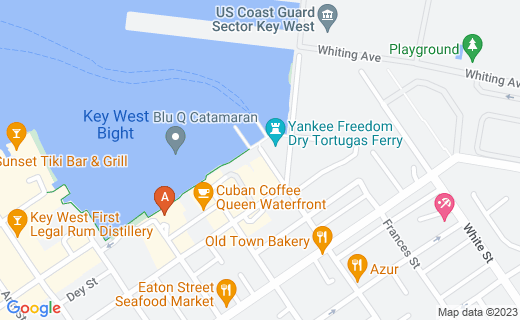 I know paintball seems like a pretty masculine activity, but girls can dominate the field!

I played paintball for the first time about a year ago, and believe it or not it was for a company outing. Mind you, all my coworkers are pretty crazy, but I had no idea what I was walking into when I got there that morning.

Apparently, all the women that were supposed to be there that day couldn't make it.

-Yes that's right. I was the only woman there and that made me everyone's number one target.

I had never shot any kind of gun before, so trying to figure out how to hold the gun was interesting to say the least. But when I finally got the hang of it, I was a rock star and those boys had to watch out because I was on a mission to win!

It doesn't matter who you go there with because the rush you get when you're creeping around the giant buses and the old forts is amazing. It's such an adrenaline rush knowing you can get pelted with a paintball at any second, you don't even realize how much you're working out your body.

The next day my thighs were sore and my legs were a little bruised but damn was it fun!

This is something I've ALWAYS wanted to do. Luckily one of my friends moved to Costa Rica and invited me for a visit!

Before you get on the first line it is actually terrifying. But when you're soaring through the sky looking at the breathtaking views you completely forget about the fear and just enjoy the moment.

A helpful tip for you though, don't 'break' too early. You could get stuck in the middle and have to manually haul yourself across - definitely not fun.

The first time I heard about a paint rave I was thoroughly intrigued. I was a little hesitant to actually go because raves have such a bad stigma, but it was incredible.

The biggest one is called Life In Color and I've seen them about four times now. They tour around the country, but every time they come to my area, I am the first in line to get tickets!

I feel like the only way to truly describe the feeling is like having a natural high. The music is pumping, there is paint literally everywhere - I mean your hair, your ears, your clothes are completely soaked, everyone is completely lost in the moment dancing and it's like everyone around you suddenly becomes your friend.

Every time they go to blast out more paint, the crowd squishes even closer together to try to be in the line of fire.

Naturally, the temperature can get pretty hot with so much body heat. Every once in a while you catch this amazing breeze to cool you off and it is like heaven. I remember standing in the middle of the crowd dancing and singing and just completely letting go.

The tickets are about $80 - but that moment of pure nirvana...that is priceless. Never underestimate the thrill of a good wrestin' in the mud.

I can't say my experiences were ever fully voluntary, but nonetheless, still a good time!

The most memorable was at a country concert - I would love to tell you which one it is but memories get a little hazy sometimes after a few beers - but this picture pretty much sums up how you would prepare for a good round!

I was just walking on by, trying to have a good time with my girlfriends, when we approach a giant pool of mud with people cheering on the girls inside of it. We stop to watch the show, I mean obviously it's pretty entertaining, but then we somehow get roped into it and then next thing I know my guy friend is pinning me down.

I'm a fighter though, I was determined to get him back, but he just picks me up high in the air and then does a nice little body slam with me and I land on top of my best friend!

After that I just stuck to people my own size. =)

If you'd like to actually see me get my butt whooped, here's a video of me mud wrestling. (I'm the one getting thrown in the air)

Just a word of advice- if you're going in there with a girl, they fight dirty! They try to beat you by taking off all your clothes!

Don't you ever have the urge to put on a giant sumo outfit and wrestle your boyfriend or your best friend?

Lord knows I do, what a great way to relieve some stress!

Wouldn't it be fun to just go out there and karate chop your partner? But trying to beat your opponent with a straight face is probably next to impossible. I think I'd be cracking up the entire time about how I look like a giant baby in a diaper!

Maybe this was originally meant for little kids, but that's not going to stop me from trying it!

It looks like so much fun to run around in a giant bubble where you can run into anyone or anything and it won't even phase you!

I think I'll take a stroll on the nearest body of water. =)

You're behind him on the bike, your arms around his waste, the wind flying through your hair, you can feel the roaring of the bike through your whole body...

And guys, I don't think I need to convince you to that riding a motorcycle is a thrill. Just don't do anything risky, you're not invincible!

And of course I have to mention the ever-so-popular sky diving!

Skydiving was always this unattainable goal for me. I felt like it was too expensive and I would never have the guts to actually try it.

But to my dismay, I discovered how cheap it actually was and then got an invitation from a friend one day that I just couldn't say no to.

Let me tell you, it is worth every penny. You will never feel more alive in your life.