About Varanasi (also known as Banares, Banaras and Kashi)

Varanasi, located on the banks of the River Ganges in the Uttar Pradesh region of Northern India, is the holiest of the seven sacred cities of the Hindu and Jain religions. It is believed to be the oldest continually inhabited city in the world and is closely associated with Jainism, one of the world's oldest religions.

According to legend, Varanasi was founded by the god Shiva, a Hindu god. Archaeological evidence suggest that the earliest settlement in Varanasi began in the 11th or 12th century BC. However, old texts belonging to the Vedic peoples thought to have been written around the same time reference the city and suggest that the area was inhabited by tribes even before the this time.

One of the most important aspects of the culture of Varanasi is the river that runs through it, the river Ganges (Ganga). It is the river that draws in thousands of Hindu's from all over India, and in fact the entire world, each and every year. Hindu's believe that bathing in the water of the Ganges cleanses their souls of their sins and that having the river take their ashes or their dead bodies allows their soul to be freed from the cycle of passing into the new life of another body. The river represents an eternal peace for the soul. The name of the river is the name of the goddess that is worshipped in Hindu culture, Ganga. 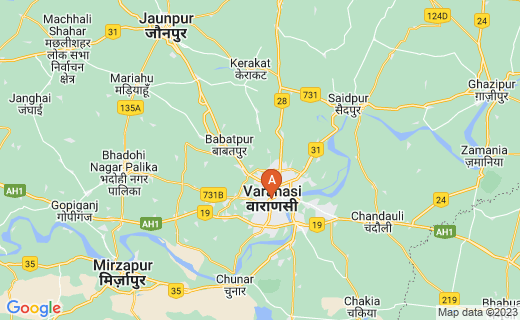 Visitors to Varanasi can be forgiven for being both overwhelmed by the spiritual nature of the city whilst at the same time feeling uncomfortable, afraid and sometimes even disgusted. Varanasi exemplifies both the good and the bad of human civilisation and takes it to extreme ends of the scale. One can't help but be in awe of the thousands of Hindu's in full dress who walk the streets bare-foot and carry candles, saying their prayers at all hours of the day. The sight of people bathing in the waters and the piles of human ashes laying by the side of the same water, ready to be cast in is a powerful visual. In Varanasi, Hindu customs and practices are on show twenty four hours a day.

The narrow little alleyways and streets around the river front intertwine and link some of the ghats along the shoreline. Tuk Tuks and other vehicles cannot come through these streets as they are too narrow. Wondering around these alleys can provide hours of fun and amusement although you may find yourself getting lost. The sights, smells and sounds can be captivating and really overload the senses. Cows, worshipped by the Hindu religion, and certainly not eaten, will be wondering around the streets of Varanasi, sometimes alone or sometimes in bigger groups. They're not normally aggressive but it's best to just let them pass and try not to touch them. It's amongst these alleys that most of the budget Varanasi accommodation can be found. For my visit, I stayed in Scindia Guest House which was a lovely old guest house overlooking the Ganga river.

And then there's the extreme other side of Varanasi, the more tangible, physical side. Fumes from the burning of human flesh drift over the city from the crematoria down by the river. Everywhere you look you will see excrement from cows, dogs and people. You will see people starving in the street desperate for something to eat before they literally collapse and die. The river itself is disgusting and filthy. It's hard to imagine how people can actually bathe in there, but they do. Many of the hotels, restaurants and guesthouses wash their sheets and tablecloths in the river. You can see women doing this early in the morning, scrubbing the cloth and beating them against rocks before placing them out to dry in the sun as it begins to warm up.

If arriving at Varanasi by train be warned that the railway station can be a hellish introduction to the city, especially if you're visiting for the first time. Tuk Tuk drivers will try and take you anywhere other than the place you want to go. Always agree the price of the journey before getting in the vehicle and make sure you've done some planning so that you know roughly where your accommodation is.

They will be wanting to take you to a place where they can get some commission. Having a map and also having the address written down is essential. Make sure you also have the name and phone number of the manager of your accommodation.

You may need to contact them in order to find them, especially if you are staying near the river as you will have to negotiate your way through the network of narrow alleys and streets. Street names and signposts do not exist here. Also beware of people on the street who suddenly appear alongside you and start a seemingly friendly conversation. They've literally seen you coming and will try and lead you off to a place where they get commission such as a textiles emporium.

Have you ever been to Varanasi?

The must-do activity in Varanasi is a morning river cruise along the Ganges in a long boat. Most hotels and guest houses (even the most basic ones) will be able to arrange this for you. Be ready for an early start as you set off towards the river in the dark. A man will be paid to row you gently along the river giving you excellent opportunities to take photos of the amazing buildings of the city and to witness the people coming down to the river to carry out their religious activities. It really is an amazing spectacle.

When the sun does come up you can really feel the buzz and the life coming out of the city and you can feel the vitality and energy of the place. You'll certainly notice the 'burning ghats' as you drift past in the boat. You'll notice huge piles of logs stacked up and there will probably be some smouldering piles on the shore of the river.

These will be the fires that have been used to cremate bodies. One of these burning ghats burns continuously for 24 hours a day and you may even see Hindus performing rites in front of the cremation ghat. Common sense should be taken when recording or taking pictures. The activities you are seeing are actually happening and aren't being staged for the entertainment of tourists. There has been known to be some resentment and ill feelings towards tourists recording these holy activities so respect should be shown at all times.

If you have enjoyed reading this article please take the time to leave me a comment in the space provided at the bottom of this page. If you are interested in reading any of my other practical travel guides please click on one of the links below.