Barb loves living in San Luis Obispo County, California and wants to share its beauty with those who can't see it in person.

Come with me to Avila Beach, California

For my birthday in April, 2012 I asked my husband to take me to Avila Beach. I'd heard my friends talk about it during the 18 years I'd lived In San Luis Obispo County, and I thought it was finally time to see it for myself.

Getting there was half the fun. We had been in San Luis Obispo in the morning on another errand, and the plan was to head to Avila right after that. Since we were exploring, we didn't have any directions with us. We just headed south on 101 until we found San Luis Bay Drive and we headed west (right) on it and followed the signs. I remembered that I had a friend with an apple farm I'd visited years ago in the area, and I thought I saw a sign leading to it so we decided to make an unscheduled stop on the way to the beach. We turned right on See Canyon Road to follow the sign and turned in again when we saw a similar sign. We found ourselves at Kelsey See Canyon Vineyards, which turned out to be a happy accident -- not because of the wine, but because they had peacocks. I spent about half an hour observing them through my camera lens, but even though it was mating season, none of the males would fan their tails for the picture I really wanted. I still enjoyed watching them, though, because I'd never been that close to a relatively tame flock running loose in a vineyard before. 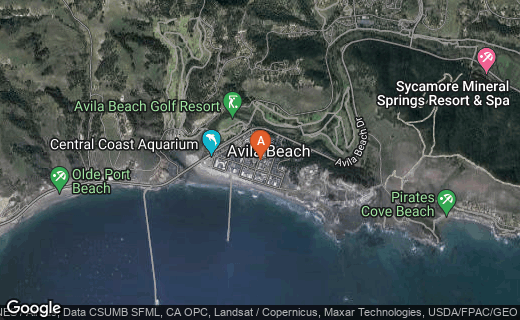 The Sights of Port San Luis 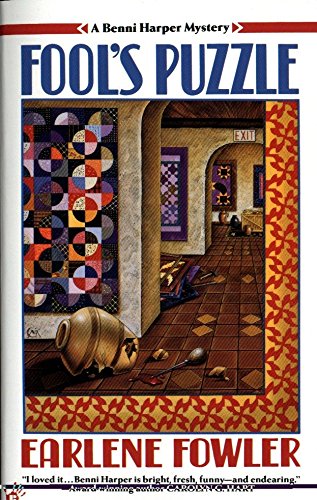 On to Port San Luis

After I finished photographing the peacocks, we turned around and went back to San Luis Bay Drive, made a right turn, and followed it until it ended at Avila Beach Drive, where we turned right and followed it about three miles to the parking lot for Harford Pier, where it ends. Parking was free, and there were many restaurants near the pier. The one I would most like to try is Fat Cats. I liked the look of it and the reviews (which you can read in the link) indicate the food is good and the portions are large. I also like the link to Earlene Fowler, one of my favorite mystery writers. (See below.) I'm hoping we can eat at Fat Cats next time we go to Avila.

My husband parked in the lot where he could look right out over the bay. If you look closely at the first picture to the right, you can see the car facing the waterfront parked to the left of the crane. My husband was very tired that day and did not get out of the car. But he still saw the seal I captured in the video fishing. It's a very peaceful place. Almost as soon as I got out of the car I saw the pelican perched not far from the crane and took its picture. I then walked around and stopped to watch the sea gulls surfing, as you saw in the video. Then I captured some of their antics on the pier itself. I walked to the end of the pier where there was an observation area, but I never could find any more of the seals I heard barking in the distance. I did see two restaurants and a fish market, though.

The docks for the fishing boats were below the pier, so I walked down to see them. I decided, though, I'd rather be back on the pier. After walking to the end, always on the lookout for a good picture, I walked back toward land. As I passed Patriot Sport Fishing, where bait and people snacks were being sold, a group of charter school students who were on a field trip were also ready to leave. As I watched them, I remembered my teaching days, and was glad that I was only responsible for myself as I did my sightseeing.

I always like to see places that were settings in books I've read. Earlene Fowler's Benni Harper mysteries have a couple of scenes on and near the pier. She refers to Avila Beach as Eola Beach. In Fool's Puzzle, there is a scene in Blue Seal Inn, which is based on the Olde Port Inn at the end of Harford Pier. In her book Irish Chain, Bad Cat Cafe, Port San Patricio, was based on Fat Cat Cafe near the entrance to Harford Pier. One reason I enjoy Earlene Fowler so much is because most of her Benni Harper books are set in San Luis Obispo County, although she refers to San Luis Obispo as San Celina.

This part of Avila Beach near the port is popular with college students from Cal Poly, San Luis Obispo because it's only a few minutes from campus and one can camp there or just enjoy one of the small cove-like beaches along Avila Beach Drive. Many other people like it because it accepts dogs on the beach. We were there on a Monday, and hardly anyone was on the beach or the camping area. I enjoyed standing near the shore watching the birds and seals and soaking up the atmosphere. Some of the best views were from the pier, as I looked back at the beach or watched those navigating the bay in boats and kayaks. This beach is most popular for fishing and camping. I don't think swimming is permitted at Port San Luis. I didn't see anyone in the water, and I did not see swimming or surfing among the options under recreation when I went to the web site I just linked to. I suspect those who want to swim go Avila State Beach or the beach near Avila Pier. I didn't make it to either of those places the day we were in Avila.

One of my favorite parts of this day trip was watching the wildlife. I love watching the harbor seal fish, and I always enjoy close-up views of gulls, pelicans, and other shore birds. I have put some of the photos I took of the wildlife, below.

Photos of the Wildlife

Since our time was limited on our first visit, we only saw Port San Luis and Harford Pier that April Day. I still wanted to see the other beach at Avila, so I went back by myself near the end of May. I saw the sandy beach closer to the main public pier and many sunbathers were enjoying it. This area is closer to the town of Avila Beach where people live. Most of the restaurants are also there.

In December of 2012, an old friend called to say she was staying for a week at the the San Luis Bay Inn on the hill next to the Avila Golf Course. We decided to go see her there, and thus we also saw a different part of Avila and got some pictures inside the inn itself, as well as of the golf course. I would highly recommend the San Luis Bay Inn if you can afford it and you need a place to stay. The rooms are spacious and the one we visited had a full kitchen. There was also a balcony with an ocean view. I was told the room I visited was a timeshare, but I see that they are also a hotel.

In the pictures below I'll show you more pictures from our December visit. The San Luis Bay Inn was beautifully decorated for Christmas, as you will see. It had a library, several lounges, snack bars, and many other public areas. It had an outdoor swimming pool and great view of the surrounding area.