Capiz, Philippines: The Rich and Mysterious Province in the Visayas

The province of Capiz in the Philippines is well-known because of the “aswang in Capiz” and other stories of supernatural and mythical beings believed to be dwelling in the area. At times, these stories can get preposterous but have already permeated into the community like a dark cloak causing doubt and even fear to potential guests, concealing the beauty and silent splendor of the region.

Are these stories even true or are they just myths and folklore being passed on from one excited storyteller to another? Have you ever wondered what’s in Capiz behind the mythical stories of the old?

I am a native of President Roxas, one of the municipalities of Capiz. I’ve lived in this quaint little town for 20 of my 30 something years. Since I was a kid, I’ve heard scary stories, sometimes even before bedtime which, by the way, is absolutely not a good idea, from my “manongs” and “manangs” (referring to people I look up to as older brothers and sisters). They would start telling stories then I would get scared but then I would be curious and ask them to continue until my active imagination would paint everything in my head. Come bedtime, I would be too scared to sleep alone I would ask my mom and dad to let me sleep in their bed.

Fast forward to years later, when I started working in Manila, people would look at each other weirdly (most of the time) as soon as they learn I’m from Capiz, which then I would ignore as if I didn’t notice. My closest of friends would tease me if I could “fly” (referring to “aswang” (witches) that could fly) or would bombard me with questions to satisfy their curiosity. Pffft! And yes, I’m blaming most of it to the local movies with all their exaggeration about the “aswang in Capiz”.

The thing is, I’ve grown up with these stories and I’ve come to believe that most of these are either just tales being told by the older people to kids to make sure they are not being bad or folklore being passed on from one person to another. But then again, I can’t be a total unbeliever just because I haven’t had any experiences on any of the supernatural stuff, right? Anyhow, I have my theories but before I go there, let me tell you more about my province, Capiz.

In the Western Visayas region, Capiz is one of the six provinces in the peaceful Island of Panay. The island is in the heart of the Philippine archipelago and Capiz can be found in the northeastern portion of the island. Its neighboring provinces are Aklan and Antique to the west and Iloilo to the south.

Subdivisions of the Province of Capiz

Capiz has 473 “baranggays”, 16 municipalities (listed above) and 1 city, its capital, Roxas City.

It was noted that the early Spanish explorers first set foot in the province of Capiz in the mid 1500s through the Banica River. Few years after their early exploration, the Spanish colonizers, as they searched for food, came again and established their first official settlement near the Banica River and called it Pan-ay. This is their second settlement following San Miguel in Cebu City. The town of Panay was first declared as the capital of the province but was later on moved to Capiz (now Roxas City) because it is near the sea and has access to ports.

Bodies of Water in Roxas City Capizeños are known to have three types of ancestors; Aetas or Negritos, Indonesians and the Malays. Though majority of the population has already progressed, there are still cultural minorities who worship spirits and live like the old days with their primitive ways.

The main local languages are Hiligaynon and Capiznon. Filipino and Business English are also widely used.

Due to the Spanish colonization for hundreds of years, majority of the population in the province is Catholic. They are also very spiritual and religious with some still very superstitious. The Seafood Capital of the Philippines The Pride of Capiz

Due to the vast bodies of water stretching in its boarders, Capiz became one of the richest fishing areas, catapulting the province to be famed as the “Seafood Capital of the Philippines”. It is known to be the major supplier of prawn and milkfish in the country. Other harvests include oysters, squid, blue marlin, seaweed and shrimp.

Aside from fishing, farming is another primary source of income for the Capizeños. The province consists of broad plantations of rice, corn, sugarcane and banana. These are just few of the primary raw products.

The province is also renowned for its beautiful Capiz shells and chandeliers. From picture frames and accessories to lamps and wall panels, the products made of Capiz shells are being manufactured and exported to the global markets.

These are definitely some of the things the Capizeños are proud of. Roxas City is the medium sized capital city of the province of Capiz. It got its name in honor of President Manuel Roxas, the First President of the Philippine Third Republic. It is just east of the north-central coast of Panay Island surrounded by the towns of Ivisan, Panitan and Panay. It is subdivided into 47 “baranggays”

It has the Roxas City Airport and the National Port of Culasi serving as the gateways for travelers from different parts of the country. From Manila, Roxas City is approximately 45 minutes by plane, around 16 hours by ship. From Iloilo City, the travel time by land is around 2 hours by bus or private car, around an hour if you’re from Aklan and 4 hours if you’re coming from the world famous Boracay Island.

You get around the city proper by tricycle and the city currently has a few malls and hotels to cater to locals and tourists. If it’s your first time in the city, the most popular place to go is to the stretch of restaurants along “Baybay” beach where you can taste the succulent and freshest seafood products of the province. How to Get to Roxas City, Capiz 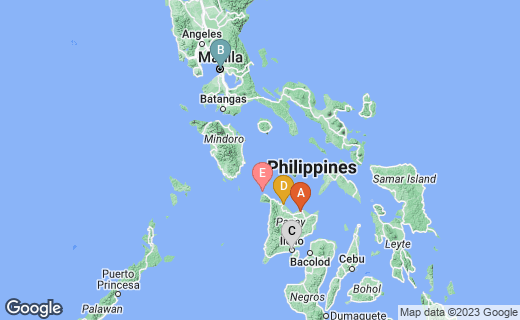 From Manila to Roxas, travel time is around 45 minutes by plane, 16 hours by ship.

From Iloilo City, you can reach Roxas City after 2.5 hours travel time by bus or private car.

From Kalibo, Aklan, travel time is around 1.5 hours to reach Roxas City.

To and from the world famous Boracay Island is around 4 hours by pump boat and bus or private car.

My Thoughts & Theories on the Supernatural

Now that you have gotten to know and got a glimpse of what I’m proud of about Capiz, let’s look at the mysterious side of it.

If you tour around Capiz, you’ll see that most areas are fields and plantations and bounded by bodies of water. Though thriving, most towns are still either rural or sub-urban areas hence dictating the simple living of the Capizeños. A part of the population is still old-fashion, very spiritual and believes in superstitions and the supernatural. It is embedded in their everyday life. Especially in remote areas, some people would rather go to quack doctors first than to be checked by a licensed doctor. I have seen different types of quack doctors from different areas of the province in action and I’ve witnessed some patients get well to live another day. So who can blame them if they continue to believe?

Moreover, unlike the people in the cities, residents in remote areas usually have plenty of time after work just to bond with family and friends hence the opportunity to share their experiences. Thus my theory of why we have a lot of folklore and mythical stories circulating around the communities. And what’s more interesting to discuss than the things you don’t understand? Stories about an old scary woman living alone in the woods, an unknown woman stalking a pregnant girl in a village, a scary looking creature cut in the waist, flying and clutching a kid, an old man with fiery red eyes and pointed ears turning into a pig or a dog… the stories go on, and living in wooded grounds with towering trees and a very active imagination is not helping.

I don’t have to witness and understand everything to believe. No, I haven’t seen them but yes, I have felt them and I know there will always be opposing forces like the light and the dark. The mere mention of witchcraft, divination, spells and the likes in the Bible means they are real and already exist thousands of years ago and could be practiced anywhere, not just in Capiz.

I am proud to be a Capizeño and I will always cherish my home province. I am tempted to say that maybe its mystery and obsession on the supernatural could boost the people’s interest and be more intrigued to come over to the province but I will not go in that direction. At the end of the day, I still think the naturally rich and peaceful Capiz should continue to thrive, capitalizing on its workforce and highlighting its strong points as a province, and remain beautiful and proud as it simply is.

Do you have plans of visiting Roxas City in the future?