Bhangarh Fort in Rajasthan is considered as the spookiest place in India. It is located at the border of Sariska Tiger Reserve in Alwar district of Rajasthan. This 17th century fort has gain notoriety for being India’s most haunted place. Numerous ghostly experiences and paranormal activities within the fort premises keep the locals away from the fort and as a result, there is no inhabitation in the vicinity.

Bhangarh Fort is a place so riddled with paranormal activities that even the official administration endorses that the fort is not normal. The Archaeological Survey of India (ASI) has put up a board on the site warning the citizens not to enter the fort after sunset and before sunrise. The ruins of the haunted Bhangarh Fort have a strange, eerie and negative aura to it which you can feel when you step inside. Many stories have been linked to the Bhangarh Fort. Local people tell that nobody dares to build a house with a roof in the fort’s vicinity as the roof collapses shortly after being built, reaffirming the belief of the locals that the fort is haunted. 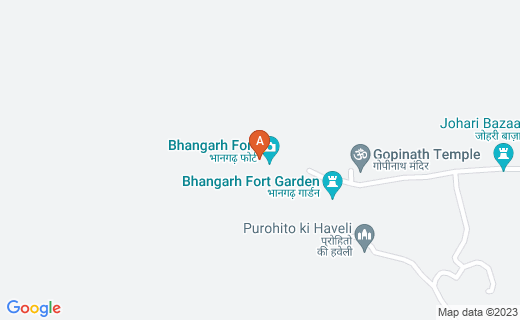 Bhangarh fort is situated near the lusciously green Sariska Tiger Reserve between Alwar and Jaipur. The fort has four massive wooden gates in every direction. The fort has a miniature waterfall and temples which lend an air of tranquility to it during the day. The ruins of the fort clearly indicate the fort’s prosperity during its heydays. The fort could have been a major tourist attraction because of its architecture and serene atmosphere during the day. In fact, it still attracts a large number of tourists every day but for all the wrong reasons. The numerous ghostly experiences and happenings inside the fort premises have ensured no inhabitation in the vicinity and the villages have sprung up far away from the fort due to the fear of the paranormal within.

Legends of the Haunted Bhangarh Fort

The legend associated with the Fort narrates the story of a local magician Singhia who practiced black magic. He fell in love with the local princess Ratnavati and decided to cast a spell on her so that she would answer positively to his advances. He tried to bewitch a cosmetic which the princess was supposed to use. The princess somehow came to know of the evil plans of the magician and she managed to kill him by pouring the bewitched cosmetic on a massive stone boulder which crushed the magician to death . Before dying, the magician cast a spell on the Fort that nobody would ever be able to live peacefully there and thus it remains a ruined, haunted place since then.

Another folk lore states that Bhangarh Fort was built by King Madho Singh who sought permission from an ascetic, Guru Bala Nath who used to meditate at the place. The permission was given by the ascetic on the condition that the shadow of the fort must never fall on the home of the ascetic. But a successor of Madho Singh added a fortification vertically which caused the fort’s shadow to fall on the ascetic’s home and so the fort was doomed within no time. The alleged prophecy was fulfilled and the fort remained haunted since then. The Samadhi of Guru Bala Nath is still there.

Bhangarh Fort attracts a lot of tourists everyday however for all the wrong reasons. This is certainly not a place for the faint-hearted. The locals believe the fort to be a dwelling of ghosts and therefore, the tourists are prohibited to go inside the fort after sunset and before sunrise. Locals often hear strange sounds (screaming, woman crying, sound of bangles) from the fort after dusk. They also claim to have seen ghostly shadows, strange lights, unusual music coming from the fort. The locals believe that if someone stays in the fort for the night will not return the next day. The entire atmosphere in the fort is filled with a pall of gloom and a chilling hollowness once the night descends. One feels as if one is being watched and the air seems charged with dizzying heaviness. The board put up by the Archaeological Survey of India cautions the visitors to stay away from the fort premises during the dark hours.