The Story of the Two Oldest Inns at Buda

The Buda Castle and the castle district are among the most famous sights of Budapest, where the original buildings showcase the face of the city both from the Middle Ages and from the Modern Era. In this blog post I will talk about the first inn at Buda, which you can still see when taking a walk around the castle.

Which two inns have been in the Buda Castle since ages?

There are two inns standing in the Buda Castle today which have been in business for hundreds of years. The Red Hedgehog was the first proper inn of Buda, where plays were often performed, while the Fortuna Inn was the first representative accommodation, housing on its ground floor the first café of the castle district. 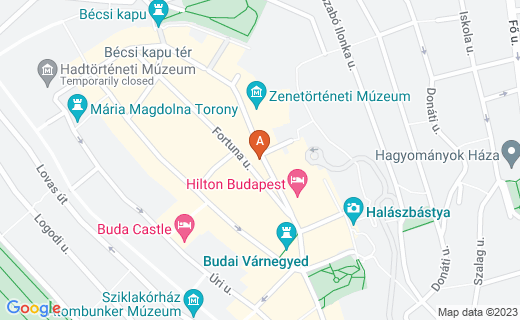 Inn to the Red Hedgehog: The oldest multiple storied building in Buda (1260-70)

As I have mentioned before, the Inn to the Red Hedgehog (zum Roten Igel) was the first and for a long time the only inn in the castle district. Following the reoccupation of Buda (1686), from the 1700s until 1805 the Inn housed many guests, as well as play performances and balls.

The story of the Red Hedgehog building is better-known than that of the Fortuna Inn. The corner building has three facades: a main facade towards the square, the eastern facade towards Táncsics Mihály Street, and the western one looking at Fortuna Street.

Archeologists revealed that the building, which in the Middle Ages constituted of four adjacent houses, had been at least two-storied from the very beginning. The Gothic windows—one on the eastern and one on the western facade of the first floor—are proof of this.

The history of the building goes back almost 800 years: it was built on the foundations and using the remains of older buildings built around 1260-70. So it might have been the first storied building of Buda.

The house, built around the 13th century, has had quite the history: the bodily relics of Saint Paul of Thebes, acquired by Louis II of Hungary for the Paulites, were held among its walls, when the order got hold of the building after making an exchange with the Cillei family in 1423. From that point the official name of the Red Hedgehog Inn was “The House Holding the Body of Saint Paul of Thebes”, and therefore today’s Fortuna Street was called Saint Paul Street as well - we read in an excellent blogpost, describing the history of the Red Hedgehog.

The Hébe well at Hess András Square, and next to it 3 Hess András Square, the Red Hedgehog house. The well was placed in the square in 1923 and then removed in 1936, before putting up the statue of Pope Innocent. In 1969 the well was relocated to the end of Úri Street, after being restored and given a new base.

In the Middle Ages, around the 1300s the house was occupied by a very important inhabitant: Miklós Kont, who was the butler of King Louis I of Hungary between 1345 and 1351.

The inn was significantly rebuilt around 1810, which resulted in Classicist stylistic characteristics. The open corridors were modernized in 1889, you can see its blueprints in the gallery above and its result in the pictures below.

What makes this building special is that despite all the modifications, the original arrangements are still preserved

The barrel vaulted gateway still opens to two vaulted rooms on the ground floor. Even the stone-rimmed, Gothic doorways are preserved on the western side.

Archeological research carried out in front of the western face revealed that there had been another, smaller and differently oriented building there, which was pulled down before this one was built.

On the facade of the former, the remainders of ashlar-decorated plaster were discovered from the late Middle Ages, while we can see what was left of an arcade on the ground floor of the latter” writes Károly Magyar in his study.