The Tomb of Gül Baba Is a Top Attraction in Budapest

If you visit Budapest you might not think that once it was the part of the Ottoman Empire. But if you keep your eyes open, you can find some oriental looking places even now in Buda.

The ancient city of Buda rises majestically on the west bank of the Danube, perched atop a hill and comanding views over the vast plain amid which the neighbouring Pest stands. Here you can find the roots of the capital of Hungary. Buda was the residence of the kings. In the 13th century the Anjou dynasty built a gothic palace considerably enlarged by King Sigismund of Luxemburg. King Matthias had is reconstructed in Italian Renaissance style in the 15th century.

Like other parts of Hungary, Buda were occupied by the Turks from 1541 to 1686. And when the Ottoman armies successfully captured the Royal Palace of Buda, the Turks started to build a series of Turkish baths along the Danube. The city has now four baths built during the Ottoman rule: Király, Rácz, Rudas and Veli Bej.

Who Was Gül Baba?

Gül Baba was a Turkish Bektashi dervish poet and close friend of Suleiman who died in Buda shortly after the Ottomans occupied it in 1541. Gül Baba was also a warrior-saint who acted as the army's imam during the conquest of Hungary in the 1541 campaign. Some of his poems - Bunch of Roses - and some of his mystical prose survive.

The sultan entrusted the members of the Bektash order to build an Islam religious center close to the town before the arriving of the army. The members of the order were usually priests, dervishes, but occasionally they performed the tasks of soldiers too. Their leader was Gül Baba, who was well known of his piety, poems, and his love of nature.

What Does It Mean Bektashi?

"The Bektashi Order is a Sufi order and shares much in common with other Islamic mystical movements, such as the need for an experienced spiritual guide—called a baba in Bektashi parlance — as well as the doctrine of "the four gates that must be traversed": the "Sharia" (religious law), "Tariqah" (the spiritual path), "Marifa" (true knowledge), "Haqiqah" (truth)."

The Death of Gül Baba

According to Turkish traveler and writer Evliya Çelebi, Gül Baba died in Buda during the Turkish siege of the city. His coffin was carried by Suleiman I himself.

In 1543 the pasha of Buda had a tomb built on Gül Baba’s grave. Many details of Baba’s life are based on legend - his name's origins for example. The most popular theory of it is “Father of the Roses” (gül means rose and baba means father in Turkish). Another interpretation is that he was originally called Kel (means bald in English”) which only after his death became Gül when his tomb was covered with roses.

When the Turks were expelled in 1686, the Austrian Habsburgs took power. As part of the Austrian Empire, Hungary, together with Buda and Pest flourished, entering a period of social, cultural and economic advance. Unfurtunatelly Austrian rulers destroyed all Islamic mosques and minarets and many tombs and graves after 1868.

A few years after the Austrian conquest of Buda the Jesuits converted Gül Baba's tomb into a Roman Catholic chapel of Saint Joseph. After their dissolution in the 18th century the tomb became an abbandoned building surrended by gardens and vineyards.

When you take a walk to the Buda Castle, visit this unique place along the southern wall of Buda castle.Near Mace Tower (Buzogánytorony) and above Várkert Bazár you can find a few muslim tombstones from and old Ottoman cemetery hide away in a park, surrounded by trees.

The first of two major restorations by the Turkish government took place in the 19th century – in 1885 they uncovered Gül Baba's skeleton. A local landowner, Janos Wagner, a famous Hungarian architect allowed Muslim pilgrims access to the site. Gül Baba's tomb is the the northernmost Islamic sacred place and an important site of Muslim pilgrims. The tomb, in 1916, represented the farthest influence of Bektashism in the Habsburg Empire. The only other turbe that remained in the former Ottoman lands north of the river Sava was the turbe of Mustafa Gaibi in Slavonia, transferred in 1954 to Bosnia.

In WWII the mansion of Janos Wagner that surrounded the tomb was bombed down, but it saved the tomb from serious damages. Another restorations were done in the 20th century and in 2017 giving the complex its current form.

The Tomb of Gül Baba in The 19th Century

The Tomb of Gül Baba in the 20th Century

The area around the mausoleum includes a colonnade, a fountain and a beautiful hanging garden. There is also a statue of Gül Baba.

The tomb is located in a hexagonal shaped building, made from limestone and mounted with a gold crescent. Inside the tomb above Gül Baba’s remains one will see a sarcophagus decorated with a turban. Gül Baba’s coffin was of traditional Ottoman design, covered with carpets featuring elaborate patterns. The walls are decorated with Quran verses (similar to those inscribed by the Turkish traveller Evliya Çelebi) and Muslim symbols.

The steep Gül Baba street leads you to the grave of Gül Baba - but the tomb is available also from Mecset ('Mosque') Street, a short walk from the Margaret Bridge in Rózsadomb (or Rose Hill).

According to legend Gül Baba, the 'Father of Roses') introduced cultivated roses to Hungary. The garden around his memorial place is today planted with roses, lavenders and magnolias.

Where Do You Find The Tomb of Gül Baba? 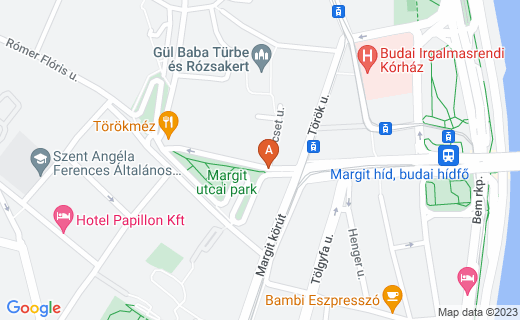 „The foundations of the Wagner villa/Wagner mansion and the remaining basement spaces provided a suitable starting point for the current reconstruction. On the basis of the new concept, a visitor’s centre, exhibition hall, café, gift shop, and a smaller conference room were built with suitable service spaces in the cellar system. To ensure disabled access, an elevator connects the underground areas with the tomb and sightseeing terrace, and at the street level a floor above, where visitors arrive at a smaller, completely new building. This, in addition to its technical function, provides an excellent background to the Gül Baba statue located next to the entrance. The wall emphasises and provides a suitable surface for the explanatory text written in Hungarian, Turkish and English. The surviving and completely renovated northern bastion had its southern pair rebuilt. Its new interior stairwell provides a link between the viewing platform at the top and the cloister below.

The other defining architectural element is the rebuilt row of arched arcades, as well as the hanging garden built onto the southern slope, which in addition to its Mediterranean spices, lavender and rose garden, provides an important pedestrian link between Rózsadomb and Margit körút with its pleasant paths and stairs."

The Tomb of Gül Baba and the Hanging Garden