Peter was born and raised in Wales. Is a fluent Welsh speaker with a love of the ancient traditions of his country. Student of Celtic legend

The Eisteddfod (plural, Eisteddfodau) is an ancient Celtic tradition centered on honoring the Bard. From the earliest times the Bard was always welcome amongst King and commoner alike. The Bard brought news from other places, legends from other times and song and poetry to entertain and teach.

In 1176 CE the Lord Rhys, ruler of all Wales called together the Bards from around Wales to gather together in competition to find the best. The winner received a Gorsedd. Gorsedd means “High seat” usually translated as Throne. This was the enthroning of the Bard, or making him King for the day. From this we get the word for this type of contest, Eisteddfod, literally “Be Seated” Every year since that time the best of the Bards have gathered together to find the one deserving of the Chair.

This is the National Eisteddfod of Wales, Eisteddfod Genedlaethol Cymry.

The National Eisteddfod of Wales is held every year on the first week of August, corresponding to the Pagan festival of Lughnasadh. Each year the Eisteddfod is held in a different town in Wales, one year in the South and the next in the North. This ensures that the finest of Welsh culture makes its way into every part of Wales. A year and a day before the eisteddfod opens in a town, an announcement is made heralding the event. This ceremony is performed by the Welsh Druidic order, Gorsedd y Beirdd Ynys Prydain, “The Gorsedd of the bards of the Island of Britain.”

The association of the Welsh Druidic order with the Eisteddfod dates in modern times from 1819. It is composed of people from all walks of life who have made a significant contribution to Welsh life. Musicians, artists, religious and political leaders, to be initiated into the order it is required that you be a Welsh speaker. The Gorsedd conducts all the major ceremonies associated with the Eisteddfod.

The Nobles of Wales would regularly sponsor gatherings of musicians, singers and storytellers in their provinces for news as well as entertainment. This is a tradition continuing in the many regional and societal Eisteddfodau all over Wales. Welsh youth regularly compete at Eisteddfodau organized by the Welsh youth league Urdd Gobaith Cymry” One historic Eisteddfod was held in1952 when the American singer and civil rights activist, Paul Robeson, was invited to the Welsh Coal Miner’s Eisteddfod. The McCarthy era government had taken his passport away so Paul sat in a studio in New York and joined the festival over the telephone through the newly constructed trans-Atlantic cable.

Paul Robeson and the Miner's Eisteddfod 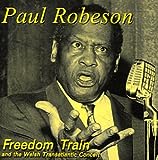 Freedom Train And The Welsh Transatlantic Concert
This CD features the incomparable voice of Paul Robeson. He became very popular in Wales, particularly among coal miner's, after filming Proud Valley, set in the South Wales coal field. He begins the CD with a rendition of the famous poem "Freedom Train" then you hear the Eisteddfod singing with him through the magic of the Transatlantic cable.
Buy Now

The Field and the Pavilion

All ceremonies, as well as songs contests and speeches within the main pavilion of the Eisteddfod are conducted through the medium of the Welsh language. This has caused some controversy in the past but it is argued that for the language to have validity some things must be available solely through Welsh. A compromise is made for non Welsh speakers in the provision of translation equipment that can be rented and will provide instantaneous translation of what is being said.

As well as the main Pavilion there is the Maes the Field. Here are various booths set up by corporate sponsors, religious organizations and political parties. Debate and even protest around these tents is often a lively and vibrant part of the Eisteddfod. Also on the Maes you will find a Learner’s Tent Pabell y Disgwyr, Literature tent Pabell len, Dance Hall Neuadd Dawns and the Science Pavilion Pabell Wyddoniaeth. There is also a live music tent though only songs in Welsh can be performed there. When the Eisteddfod was held in Swansea some years ago the music tent was named “Jacs yn Joio” That’s an ‘in’ joke. There officially is no ‘J’ in the Welsh alphabet and “Joio” isn’t really a word, it’s a slang expression but you would have to be Welsh to get the joke.

These are; the Crowning of the bard, the awarding of the Prose medal and the Chairing of the Bard. The contest for the Chair is highly competitive, an extremely high standard is set and it is not too unusual for the chair not to be awarded if, in the opinion of the adjudicators, the standard is not deserving of the award. All contestants must enter under an alias. This way the adjudicators cannot form a bias. Only the secretary to the Eisteddfod knows the true names of the contestants.

During the ceremony, the Gorsedd enters and take the stage. The white robed Druids Derwyddion, the blue robed Bards Beirdd and the green robed Ovates Ofydd. The ceremony is begun with the prayer that unites all Druids Gweddi’r Derwyddion, the Druid’s Prayer. When the winner is summoned to the stage a large sword, the Sword of Peace is raised over his head. The ArchDruid calls out to the audience three phrases; after each phrase he asks “A oes heddwch” (Is there Peace.) to which the audience respond “Heddwch” (Peace) The three phrases are;

The call for peace does not refer to war or battle. It is asking the audience if they are at peace with the decision to honor the bard.

After this the Bard is seated ‘In the peace of the Eisteddfod” A floral dance is performed by young girls from a local school. The dance symbolizes the gathering of flowers from local fields. A young married woman presents to him the “Corn Hirlas” (The Horn of Plenty) Then another young woman comes forward with a basket of flowers “Blodeugedd” representing the bounty of the land. It is a beautiful ceremony, charming in its simplicity and its timelessness.

One of the most memorable and moving occasions in the Eisteddfod’s history took place in 1917, the Prime minister, Lloyd George, was in attendance when the winner was declared to be the author of the Poem “Yr Arwr” (The Hero) The name the winner used was “Fleur de Lis” No one came forward to take the chair. Then it was revealed that the winner was Ellis H. Evans. A young man with the Bardic name of “Hedd Wyn” (Blessed Peace) who had been killed at the battle of Passchendaele six weeks earlier. The empty chair was draped with a black sheet in a moment described by the ArchDruid as ‘The festival in tears and the poet in his grave.”

The story of Hedd Wyn

Stori Hedd Wyn/The Story of Hedd Wyn (English and Welsh Edition)
Ellis H. Evans has become known as "The poet of the empty chair." This is his story, and also the story of the tragedy that is war.
Buy Now

Welcome to the National Eisteddfod

If ever you visit Wales in the first week of August, visit the Eisteddfod. Although Eisteddfodau are held in other places such as the Chubut province in Argentina where poetry and song are performed in Spanish and Welsh and in the other Celtic nations of Cornwall and Brittany, the Welsh National Eisteddfod is a unique experience and one unlike anything you may find anywhere else in the world.