The Fortress of Rocca Calascio in Abruzzo, Italy

I am an English-speaking, freelance food writer based in Rome. I love writing articles on various aspects of Italian culture.

For the lone tourist trecker or bused in tourist group the decision to visit Abruzzo and it’s central city of L’ Aquila is still tempered by events in its recent history. Earthquakes and ongoing seismic activity have blighted this beautiful area, however for those that do make the trip there awaits the reward of vast rolling mountain landscapes, big breathtaking blue skies, wild eagles and small mountain villages, each with a unique history and distinct character. Finally and best of all are the magnificent ancient mountaintop castles dotted around the region, notably the Forte Spagolo in L’Aquila and the incredible Roccascalegna in the Majella region.

Less well known and less visited on the tourist itinerary is Rocca Calascio complete with a mountaintop fortress that was built on a rock outcrop above the village of Calascio. This article looks at what to do and see in this village and mountain location.

Via Salaria, The Sabine tribe and The Salt Road.

Ancient bones in local caves have been found that date back 80,000 years. The ancient paths in the area were originally sheep herding tracks used by Abruzzo's historic ancestors, they were still used later by the distant and now extinct Vestini and later Sabine tribes. The routes were used to move animals from winter lowlands to summer highlands, the Alpine Transhumance, a further track crossed this route heading towards the Sabine region, used mainly to transport salt after it was collected from the salt marshes near the sea on the coast at the end of the river Tiber.

So historically this area of mountains and valleys had long been a crossroads for those traveling across this region. The area of Calascio was settled by Romans who used the locations high vantage point by building a wooden watchtower and rebuilt the original track by building a Roman road from Rome to the Adriatic Sea. The village of Calascio, is located along this historic road known as Via Salaria, an ancient road that sits on a route that may well have predated the construction of Rome. Further construction later led towards L'Aquila, itself the site of a small amphitheater and Roman settlement.

Thus a geographic natural crossing point and vantage point that also controlled the passes through the valley of San Pio delle Camere and a trade route that eventually connected the grand cities of Naples-Sulmona-L'Aquila-Florence and Via Tiburtina Valeria passing through the gorges of Popoli.

Historically Calascio is really the story of two villages, one sitting below and one located higher up the valley, totaling fewer than 100 inhabitants. It is located in the province of L'Aquila, a territory that spans within its area the Gran Sasso National Park and the Monti della Laga.

It is a mountainous and somewhat wild hinterland of Abruzzo, with to the south the massive Gran Sasso d'Italia mountain peak below which sits the wide plain of Campo Imperatore at an altitude of just over 1200 meters, a panoramic position overlooking the valley of Tirino.

The main village has long been the main stopping point with the smaller village sitting apart from the main village site, perched up on top of a mountainous outcrop at 1460 mt., this is Rocca Calascio. Historically this smaller village was long uninhabited and abandoned by medieval times due to seismic activity before being rediscovered, only for tragedy to again strike In 1703 with a violent earthquake with an estimated magnitude of 7 to 8 on the Richter Scale. It damaged the rock foundation of the village and it was abandoned yet again with much of the population moving to the relative safety of the village of Calascio below, it was not until the 1990’s that it was re-inhabited the buildings restored with the opening of a number of small Refugio, a restaurant, a bar and a few small souvenir shops.

Heading along the medieval path close to the fortress, there is the distinctively shaped church of Santa Maria della Pietà, a building erected towards the end of the 16th century. The architectural style is based on similar structures built in Abruzzo, a form that makes the most of the exceptional beauty and extreme landscape value of the site, located behind the ancient previously semi abandoned village of Rocca Calascio, it is dominated by the extensive pastures of the southern slope of the Gran Sasso mountain range.

Recent research suggests the church is probably based on a pre-existing Renaissance church, but in this case, it has an octagonal external structure with a sacristy-style setting on one of its façades. The interior is based on a system of decorative columns or "Paraste", that gives the illusion of a more robust structure. The walls are decorated with a painting depicting the Virgin Mary and a sculpture of San Michele.

The church is today used as a simple oratory but is also a destination for devotees and sightseers.

Above this small village sits what is technically a fortress rather than a castle. The Romans built a wooden sighting turret on the top of the mountain where the fortress is today. A simple central stone tower was later built in the 10 century, to function as an observation point. It was constructed using larger stone blocks at the base tapering up to smaller stones in the three-floor tower complete with upper floor lookout, a central nucleus. The lower walk around level area and four towers were added in the thirteenth century each with carefully placed openings with a firing range over the outer walls of the fortress.

It's simple construction and its bare walls show it was never intended to be the residence of nobility but rather, in fact, a space for stationed soldiers. Looking somewhat fore-lawn the towers that were added later were damaged in an earthquake in 1461 and we're not rebuilt.

Over time a support village formed at its feet of a small inhabited center, used as food stores and for workers to repair and fashion tools. Over the years, the structure built on the rocks changed and expanded, the fortress gaining more and more importance and its control passed into the hands of several families, from that of Carapelle family in the fourteenth century to that of the Piccolomini family on the fifteenth, until finally reaching the Medici family in the sixteenth century.

For a long time, the two villages, Calascio and Rocca Calascio, lived almost independently of each other, each with a distinct strategic function: the village of Calascio, located at the foot of the mountain, as a point of support on the road that leads to Santo Stefano di Sessanio and L'Aquila, but above all to the mountain path for the fields of Campo Imperatore.

The fortress and village have been used in a number of films as a location. 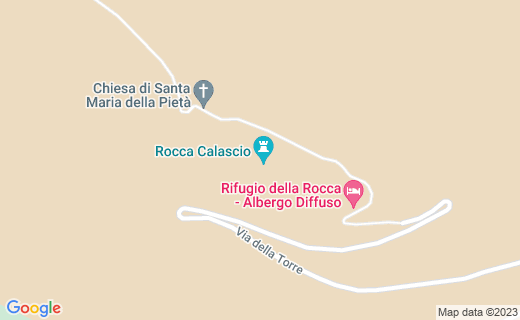 As this village is set within a relatively remote location the visitor will find the venues clear of crowds especially as the fortress itself is closed from October for the winter months. Tours are available running from L'Aquila to Rocca Calascio in the summer months.

The best way to visit is by car as it is 1 hour and 50 minutes from Rome and is an ideal point to include if your day trip includes a quick visit to the city of L'Aquila. Travelling on from the city of L 'Aquila by car, it is possible to also visit the nearby village of Santo Stefano on the route as the village is accessed via Strada Provincial 7.

Once at the location it is easy to find the carpark at the end of the village next to the cemetery and park up. A minibus service runs up the winding road at regular intervals in the summer up to a staging point below the fortress with the main site itself closed by 7 pm.

For the more adventurous, the ideal way to discover the village and its surroundings is by walking along the medieval itinerary winding up the steep slope and through groups of trees to the high village and on up to the rock that sits at almost 1500 meters altitude. Note the path up the hillside is about 40 minutes walk for someone who is fit but some walkers may struggle with the loose stones on the route. Once in the upper village of Rocca Calassio the small path weaves its way on through the village along the base of the fortress outcrop for about 500 meters before reaching the final peak. The views are truly spectacular as this fortress is the highest in Italy and one of the highest in Europe.

The local visitor who feels like eating in the village can try some excellent local cuisine, here are a few ideas.

At the very beginning of the route up, there is a chance to stop at the charming and small Ristorante Da Clara for a meal and a coffee indeed stopping off on the way back for a break is recommended!

The local Abruzzo diet has a lot of roasted meats available, but lamb Arrosticini cooked in cubes on wooden skewers is especially common and goes well with the local Montepulciano di Abruzzo red wine. Lighter soup dishes are delicious during the winter months. A specialty is a warming lentil soup that is served with a delicious topping of breadcrumbs fried in olive oil. The lentils are cooked with a local leafy vegetable called bieta or homemade pasta that is cut into squares. Some dishes are flavored with wild saffron that is harvested in the local village of Navelli further along the valley. Pasta dishes are delicious too especially ravioli filled with ricotta cheese obtained from the milk of locally bred sheep.

Cheese is also a constant theme of the diet with characteristic faded, rustic baskets of cheese on display in Calascio for sale. Like so many villages in Italy, there is always something sweet for dessert, sweet almond-flavored biscuits called Amaretti are available from a small bar.

For home consumption families, instead, prepare small biscuits known locally as anchovies, these biscuits are made with the egg yolks remaining from the preparation of the Amaretti, so nothing is wasted in the kitchen.

Drone footage of the castle

Atmospheric photos of the fortress taken with a distorting lens.