Where is the wettest place on Earth and what is its average rainfall? - Cherrapunji, India

Cherrapunji situated in North East India in the Meghalaya State (separated from the state of Assam in 1972, Meghalaya means “Home of the clouds”) in the Khasi Hills, is unbelievably the wettest place on the planet earth which receives the maximum rainfall in the world, holding a record that it once rained continuously every single day for two years. It made a world record of 1,041 inches of rain in 1861. North eastern part of India is full of natural treasures with lush green canopies, valleys, mountains, rocky hills, rivers, diverse flora and fauna. The flora and fauna have colorful and rare orchids, ferns, moss plants and dense wood forests in small patches. Orchards of oranges and pineapple are the common sight of Cherrapunji. It is a 60 kilometre drive from the state’s capital Shillong, and is situated 1290 metres above sea level.

But the ironical fact about this place is that, the people thirst for water without enough water to bathe, drink or cook during months when there is no rain (reason is discussed below). On an average this place receives 366 inches of rain every year. The reason for this typical rainfall is the monsoons (seasonal winds). The town Mawsynram which is 16 kilometres from Cherrapunji also receives lot of rainfall making it a competition between these two places. It is believed that it rains mostly in the night, thereby creating no disruption to normal day life. It does not rain or rains very little during winter, making it dry because the springs also dry up. Cherrapunji has started to dry up recently with less rain and Mawsynram is becoming the wettest place. Trucks can be seen carrying water to Cherrapunji during the winter season.

Causes for so much rainfall in Cherrapunji:

Rainfall is caused by the monsoons, which are winds that blow in one particular direction for almost six months in a year causing excessive rainfall and at the end of this period change directions and lessen the amount of rainfall. The oceans help with the heavy rainfall including the rivers and lakes. Water evaporates from these water resources and remain in the atmosphere. This then condenses into clouds and then forms raindrops when the air is cold. During the moist season the air is cooled as it blows over the high lands and causes heavy rainfall on the windward directions. Two main factors contribute to the abundant rainfall in Cherrapunji.

i. Elevation:The height of the land well above the sea level makes the air that blows up the valley over the plains really cold. Due to this cooling of the air the moisture trapped in the air condenses thereby forming clouds, which are then later released as rain.

ii. Monsoons: The monsoon winds in this north eastern part of India are rich in moisture. This supply of moist air for six months continuously results in almost continual rainfall.

Reason for water scarcity in Cherrapunji:

The environmentalists and the people agree to the fact that deforestation (destruction of coniferous forests that protected the soil) is the reason for less rainfall. People have cut down trees and have harmed the environment. Also mining for coal and limestone, and growing crops in ways people have wished to has caused the topsoil to wash off. Due to these factors, the soil has lost all its absorption capacity or the water retaining capability and so, as it rains, the water flows down to lower lands.

In 1960, Cherrapunji had a population of just 7,000 people. But since then its population has increased 15 times with the construction of a cement plant in Mamlukcherra 20 years before, which is a few miles from Cherrapunji. Apart from the increase in population that poses a threat to the forest, the cement plant also polluted the environment. As a result of all these factors, water is scarce for a few months in Cherrapunji, making the people walk for miles to collect drinking water and to bathe.

Places to visit in and near Cherrapunji:

Cherrapunji is a place which can give one a collection of views, that can last a lifetime. Its richness is in rare varieties of orchids, dense woods, cliffs, ferns, moss, and also orange orchards and pineapple plants. It has also become a paradise for botanists.

ii.                 Khasi Monoliths, which is situated near the Mawsmai falls, has many underground passages underneath old caves. It is an exciting place for explorers. Khasi monoliths are stones which lie scattered around in memory of their ancestors.

iii.               Noh KalikaiFalls is a stream which emerges from a steep mountain and falls down a deep rocky cliff into a stream.

The Living Bridges of Cherrapunji

These  are root bridges of Cherrapunji which are alive and are grown naturally; they are not built. Cherrapunji has a type of rubber tree called the Ficus Elastica, which grows secondary roots from its trunks. The local tribe realised its potential and used hollow betel nut trunks to direct the roots in whatever way they liked. After they grew all the way across the river they are allowed to grow back to the soil and over a period of time leading to a strong bridge. They take anything between fifteen to twenty five years to develop completely and last for centuries, growing stronger each year. Boulders or stones are placed on these roots to make crossing easier, and they have the strength to hold at least fifty people at a time. 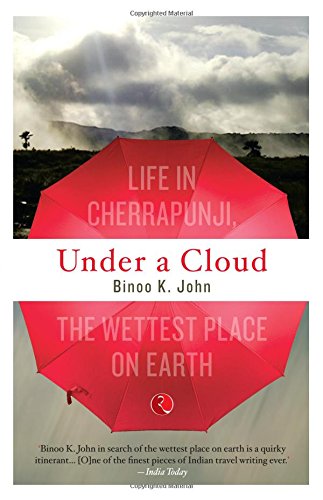 Under A Cloud: Life in Cherrapunji, the Wettest Place on Earth
Buy Now