The Roman Ruins of Tarragona Spain

Mary and her husband work on international projects and have worked in the Maldives helping the government with skills development.

The Roman City of Tarraco

Back in the day, Rome and Carthage were at it, hammer and tong, for mastery of the two empires. Tarraco was a key port for moving food from the Spanish bread basket to the city of Rome.

The Scipio brothers, General Gnaeus and Publius, took it on themselves to make Tarraco, later Tarragona, strongly defensible and a first class deep water port. The evidence of their effort remain today. The fortifications especially on the seaward side are imposing and impressive and Hannibal would have had a terrible time reducing the wheat supply going to Rome.

Tarraco: The Roman City by the Sea

Tarraco, A Roman Stronghold in Spain

Tarraco became the first key Roman stronghold in Spain. Emperors honoured it. Commemorating his victories, Julius Caesar called it Colonia Julia Victrix Triumphalis. Emperor Augustus made Tarraco capital of Hispania and a temple was built in his honour there and the Castle of Pilate made as his Palace.

During the Roman Imperial rule,Tarraco flourished even more. Its flax trade, fertile plain and sunny shores, and its wine, praised by Pliny the Elder in one of his writings, made it one of the richest seaports of the Roman Empire.

The City of Tarragona Today

Tarragona, A Great Port City in the Mediterranean 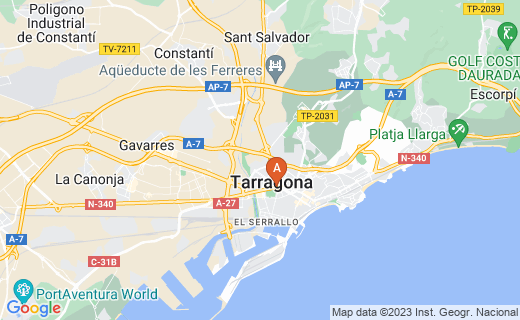 The Roman Ruins of Tarraco

Tarraco as a Roman city and capital of the Roman province, Hispania, became much more than just a port or a legionary camp. Because of its wheat, wine and olive oil, merchants and traders came and, in a very short time, a city grows that boasts a Forum, Theatre and Temples. and a Circus. We are the happy inheritors of the Scipio brothers' efforts and as you walk through the ruins, it is impossible not to be impressed by the scale of their vision.

Later centuries would build Christian churches on top of Roman temples and some of the remains have been spirited away to become part of homes and buildings as history unfolded and the city grew.

The remnant is a bit of a scramble of Roman, Visigoth and Islamic architecture but as the testimony to the shift in civilization and the contribution of each empire, Tarragona is difficult to beat. In fact, UNESCO has declared these ruins a World Heritage Site.

Most of the ruins are highly accessible, beautifully presented and well protected. It's almost a relief to come to the city and be able to see back over two thousand years of its history spread almost like a table cloth in front of you.

During the Roman Imperial period, cities vied with each other for pre-eminence and amphitheaters became in its size and ornamentation, symbols of the city's wealth.

Given its wealth as a Roman colony, Tarraco has the biggest amphitheater (109.5 metres by 86.5 metres) outside of Rome at that time. It was estimated that this Amfiteatre de Tarraco could hold a crowd of around 14,000. Built overlooking the Mediterranean, I am sure it was one of the most beautiful as well.

Amphitheatres were open-air venues where the Romans had gladiator games, plays, athletic competitions, fights with wild beasts and executions of those given death sentences. It was also a venue to Romanize the people of the colonies and for the flamen (priest) to promote the cult of Emperor worship.

Amphitheatres are different from other open-air venues like the circuses, hippodromes or the theatres in that they are built circular. Thus, the term amphitheatrum, which means theatre all around. This is to distinguish it from the theatres which are semi circular. Today, though, the words have been used interchangeably. There are still around 230 amphitheatres that can be visited all over the former parts of the Roman Empire.

Today in Tarragona, you can still see an almost complete representation of a Roman amphitheatre with the seats arranged according to classes, in some cases, seats were marked for families and magistrates. There is, of course, the place for those standing only, and the other elements of an amphitheatre.

A branch of the Via Augusta passed through here and in the first century, on each side of the road, were constructed the Necropolis and funerary remains were found in here.

To visit the place, here's some info for you:

Going Down into the Amfiteatre

The Visigoths and the Roman Ruins

When the Visigoths took over Tarragona, there was really no fight. The Romans were by then receding. The Visigoths, then, used whatever was there to build a Christian centre for themselves. The Amphitheatre moved from being the centre of Roman activities to becoming the centre of Christianity.

A Church was built on top of one of the Temples.This Church was eventually destroyed when Bishop Fructuosus and his deacons, Augurio and Eulogio, were martyred. To honour these martyrs, a Visigothic basilica was built but this, too, was destroyed. Then, another Basilica was built here in the medieval times, The Basilica of Our Lady Mary of the Miracle. We only see ruins today of these various construction.

The Visigoths Church and Cemeteries

Remains of a Visigoth Basilica

More Things Uncovered Among the Ruins

In 1952, a mural painting was also found of the Greek goddess Nemesis (Invidia in Roman) and it is surmised that the gladiators may have prayed to this goddess before the games and the place was sort of a shrine to Nemesis. Nemesis was, according to Wikipedia, the goddess who enacted retribution against those who succumb to hubris (arrogance before the gods). A winged goddess, she personified resentment aroused in men by those who commited crimes with apparent impunity, or who had inordinate good fortune.

As we've learned, archaeology as a layer upon layer business has the skills not only are new layers uncovered but the knowledge drawn from existing layers expands and expands.

The Roman Fortifications of Tarraco

To the Romans, it was easy to spot Tarragona as as a military stronghold. So, in 218 BC, during the Second Punic War, the Romans established their base here. The Romans knew how to make walls. They had built an Empire tearing down the walls and fortifications of every tribe or nation in Europe and the Middle East so when it was their turn to build a wall, they took all the knowledge of others failures and built it into their structures.

Huge blocks with smooth surfaces on the outside wall covering masses of broken rock behind. Nothing was ever impregnable but Roman walls were really the worst nightmare you could face and Tarragona represented Rome's best.

Made of megaliths reinforced by towers and a second body of free stones, the Wall in Tarragona was 6 meters high and 4 meters wide. Inside were the troops' living quarters and the artillery. Eventually, settlements of troops' families and traders grew demanding for expansion. When this expansion was finished, it was said that it stretched 5 kilometres long extending to the [port and surrounding the whole Roman city.

Subsequently, the walls and fortifications have seen many battles and with more modern weaponry, it was not able to withstand. In 1884, it was declared a Historic and Artistic Monument.

Pictures of the Fortifications

Today, you can go around the Fortifications and see the remnants displayed. The displays are very well presented and going up its top floor, you can get a good view of the city.

Marker, A Part of a Column in the Fortification

Said to have been constructed during the time of Augustus, this Aqueduct took water from the the Francoli River about 15 kilometres north of the city and supplied this to the residents of the ancient city of Tarraco. It is 27 meters high and 249 meters long.

The bridge is part of the aqueduct and this complex is about 4 kilometres north of Tarragona.

Below is a video by Jaume Vila of the bridge and the aqueduct.

Tarragona is not really in the radar screen of many tourists in Spain. With so many Spanish cities competing to attract tourists, Tarragona often disappears in the view so we were surprised when we read about its Roman ruins which is one of the best in the country. So, avoiding the cold north, we decided to drive to Tarragona and what a surprise we had.

The Roman ruins exceeded our expectations. Anyone visiting Barcelona must take a day tour here. You can easily travel there as it is only about an hour from Barcelona and it is easy to get to using public transportation, the bus or the train.

A Visit to Tarragona

Have you visited Tarragona?