Things to do in Dubrovnik in Croatia : A Visit to Lokrum Island

There are many islands that you can visit by boat from Dubrovnik. But from the historic old Croatian town a trip of only 15 minutes takes you to the little island of Lokrum.

It lies just 600 metres off the coast and is certainly worth a visit on the regular excursions available. Floating past the luxury yachts berthed in the water or the occasional group of kayak enthusiasts you land on the island at the main jetty in the little harbour of Portoč.

You can easily limit your visit to this locality as the nearby rocks are a popular spot for both sunbathers and sea-swimmers.

In the morning it is usually flooded with warm sunlight but if it is shade you seek then later in the afternoon the sun obligingly dips under the tree tops of the woods behind the beach. 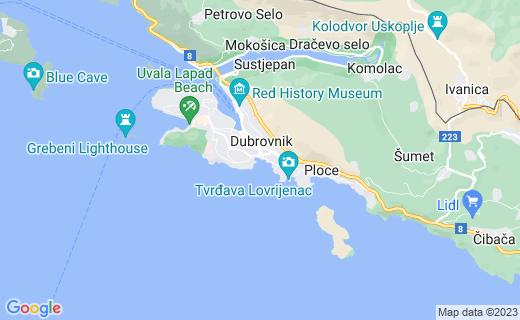 The harbour area is wonderfully cool at this time in the shade of laurel, oak, pine and cypress trees. Meanwhile the sun lights up the coastal hills although not to the greatest effect it has to be admitted.

The sloping terrain across the strait is a bare and dry collection of rock and sparse vegetation that does not offer the most attractive backdrop.

The peacocks hosts of Lokrum

There are more things in such a small space to do in Lokrum. After a cordial welcome from the free-ranging peacocks that wander the grounds you could explore the whole island in a few hours on foot.

The peacocks are plentiful around the harbour area and very tame with people. They will rarely refuse a meal and will approach close to you if you have some tasty bread or snacks on offer.

In the summer afternoons the delicate notes of a classical guitar may accompany you on your way. The open-air watering hole of the Lacroma Bar at the harbour has regular live acoustic sessions.

You can sit among the trees and enjoy some coffee, wine or a beer with food always eaten best in the 'al fresco' manner.

Historical origins and stories of the island

Curiously the name of the bar is the Italian translation of the island's name. The latter derives from the Latin word 'acrumen' which means "sour fruit" and the island was first mentioned in 1023 when a Benedictine monastery was founded.

There are actually monastery ruins from a later age within the central eastern part of Lokrum. The monks left in 1808 but apparently not before leaving a curse on the island.

Bearing this decidely unchristian legacy in mind elsewhere the island is surrounded by rocks of varying degrees of accessibility, opportunities and hazards. One famous historical figure may have testified to this although it was long before the curse.

There is a legend that Richard the Lionheart met with misfortune here in 1192. His ship was said to have been shipwrecked on the island on his return from the Crusades.

But today it means that you can find a secluded place if you prefer the quiet life. On the other hand if you don't mind the exposure there is a nudist beach on the eastern side.

For those who like to walk and explore there are plenty of footpaths that are easy to negotiate. Stout boots are not necessary in fine weather.

But certainly strong soles are recommended whatever the footwear as insulation against the sometimes stony surface.

In the hot, dry weather it is no surprise to see the paths lined with hosepipes snaking through the woods. There are also plentiful 'No Smoking' signs planted among the trees. Lokrum is tinder dry in the summer and the locals are ready for immediate action if fire breaks out.

That would truly be a disaster aside from the danger to humans and wildlife. It would also threaten the marvellous open-air Botanical Gardens on the east side not far from Lacroma.

This was established in 1959 by the then Yugoslav National Academy of Science and Art. It has free entry and contains around 500 fantastic examples from around the world.

South American specimens are particularly represented as well as plants from Australia and elsewhere on the planet. Huge palm trees, cacti and eucalyptus alter the traditional woodland character of the local species.

The gardens themselves had to be restored in 1993 after damage caused during the attacks by Serbia and Montenegro during the Balkans War. Sadly the library and much documentation was destroyed by fire during the bombardment of Dubrovnik and its surroundings.

The south side of the island

From Portoč you can walk over to the south of the island in around 15 minutes. As opposed to the harbour this side is shaded in the morning but enjoys the sunshine for the rest of the day.

The clear waters of the Adriatic stretch out seemingly for endless miles except for the knowledge that Italy is somewhere beyond the horizon.

On the south side there are marvellous little coves where you can relax or swim and play. The sea water is perfect, pure and clean although the Adriatic is usually slightly cooler than the nearby Mediterranean.

Unfortunately the late evening summer sunset cannot be seen by visitors as the last boat will have departed. You are not allowed to remain behind on the island overnight unless you have special permission.

Marching up to Fort Royal

For a little more strenuous exercise, but only a little, a walk up the western hill leads to the modest pinnacle of Lokrum. It is crowned by an old fort sitting 96 metres above sea level

It was built by the French in 1806 after they occupied Dubrovnik and was originally called Fort Royal Castle.

It was later changed to 'Maximilian's Tower' in the mid 19th century. It had new tenants then as the Austrians had taken control of Dubrovnik and named it after Archduke Ferdinand Maximilian I.

Incidentally it was he who introduced the peacocks to the island imported from the Canary Isles. He was also a short-lived Emperor of Mexico from 1864 until his execution by the Mexicans 3 years later.

On the way the hyperbolic 'Path of Paradise' provides a pleasant promenade through the trees to the fort.

After all your exercise, exploration or simple relaxation in the hot conditions it's time to chill out. Not far from the harbour and the next to the Botanical Gardens lies a shaded olive grove.

Ideal for picnics or just to slumber in an afternoon nap before departure. The peacocks will keep you company as they enjoy the cool conditions too.

However, taking things full circle you can always return to the Lacroma Bar at Portoč and refresh yourself ready to return on the boat to Dubrovnik.

So make sure if you ever visit the city that you take the chance to visit its little neighbour across the water. Lokrum won't disappoint.