Siem Reap city is the gateway to the famous Cambodian Angkor Wat temple. It's from this city that tourists set out to see the enchanting UNESCO site, located about 4 miles away. But are you wondering what else is there to do in Siem Reap besides exploring the Angkor temples? I was wondering the same thing when my boyfriend and I visited Siem Reap in June 2010. It turns out that there are some pretty neat things to do. I'm happy to share with you what I think are the best things to do in Siem Reap.

Below is a list of things you can do to make the most of your stay in Siem Reap.

What To Do in Siem Reap

Watch the Sunrise At Angkor Wat

Angor Wat is one of the wonders of the world and one that is extra spectacular at sunrise. Get out of bed at 6am for one of your trips to the Angkor Wat temple and watch the sunrise. It's really worth getting up early for.

Angkor Wat is the largest religious ruins in the world, built back during the 12th Century by the Khmer (Cambodian) Empire. It is an enchanting UNESCO World Heritage site and the huge complex is full of temples, lotus-blossom towers, Buddha images and dancing girls (apsaras). You will have the option of buying a one day pass, a three day pass or a seven-day pass. My boyfriend and I chose to get a three-day pass and we found it to be the perfect amount of time for us to see the humongous complex. A 3 day pass costs $40.

Learn About the Khmer Kingdom

Stop by the Angkor National Museum to learn about the Khmer Kingdom. The museum is very well organized and explains Khmer history and cultural heritage. There's even a room with the traditional costumes. We stopped by here on the way back to Siem Reap from the Angkor temples on our last day.

Relax With a Khmer Massage

Who can resist a massage when they cost just about $8 for an entire hour, in your hotel room? We couldn't! A traditional Khmer massage differs from a Thai massage in that there is less pushing and twisting. Highly recommended!

Shop at the Angkor Night Market

The Angkor Night Market opens when the other markets (Old Market and Central Market) close. All the tourists seem to gravitate here nightly and there's a fun atmosphere. There are a bunch of stalls selling handicrafts, souvenirs and cheap street-food.

Go Out on Pub Street

"Pub Street" as is called Street 8 is a fun street to go out for dinner and drinking. The most popular bars there are Angkor What?, The Red Piano, Temple club and Le Tigre du Papier. You can also try the area call The Alley for dinner. Enjoy Siem Reap's nightlife.

Get Around Town By Bike

My boyfriend and I found biking to be the best way to get around Siem Reap. Bike rentals at our hotel were just $1 a day and prices in other hotels range from being free for guests to up to $3. Another way to get around town is by tuk tuk but we preferred tuk tuks only for getting to Angkor Wat, which is too far to bike to early in the morning.

Are you planning to travel to Siem Reap?

Fish amok, or amok trey, is steamed curried fish in a banana leaf. It's a traditional dish of Cambodian cuisine. 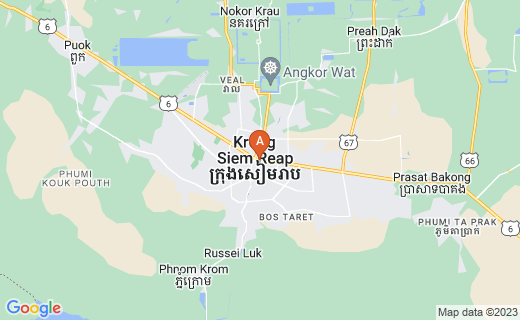