Ulaanbaatar is the capital city of Mongolia. It is by far the largest city in the country with a current population of 1.3 million people and rising all the time. The 2 most popular ways of getting to Ulaanbaatar are by flying in or by arriving on the train. Ulaanbaatar is a key stop on the Trans Mongolian route of the Trans Siberian Railway. Trains between Beijing and Moscow arrive at the city's railway station several times each week. Ulaanbaatar Railway Station is approximately 3.5km from the centre of the city, Sukhbaatar Square, also known as Chinggis Square.

The other common way to Ulaanbaatar if you are travelling from outside of Mongolia is to fly. Direct flights to Ulaanbaatar are from a limited number of cities only. So, unless you live in Beijing, Moscow or Seoul, you are are almost certainly going to need to fly from your home country via one of these cities. As a result of the limited competition between airlines you will find flights to Ulaanbaatar to be rather expensive.

The city's airport, Chinggis International Airport, is located 18km to the southwest of the city centre. It's a tired old airport and does exactly provide the most positive of first impressions. Thankfully the airport is due to be replaced by a brand new modern airport in 2019. The bad news is that it's twice as far out of the city and given the lack of any transport options other than the car, expect the journey to take some time.

Ulaanbaatar is a city that has seen rapid population growth in recent years. More and more people are leaving their villages and leaving behind the nomadic way of live to join the ranks of the urban city dwellers in the capital. Unfortunately the cities authorities have struggled to keep pace with this rapid growth.

Ulaanbaatar has no tram, no metro and no local rail systems in place. The only public transport is a severely limited public bus system and privately run shared mini buses. Therefore, almost everyone who can afford one drives a car. The roads are incredibly congested in Ulaanbaatar. Expect the 3.5km journey from the Railway Station to the Sukhbaatar Square to take at least 30 minutes. To walk takes 47 minutes.

In the absence of any public transport, and with the heavy traffic making short taxi journeys inefficient, the best way to get around Ulaanbaatar is on foot. However, it's not such a pleasant experience. Ulaanbaatar has been designed to cater to the car. It has not bee designed with the pedestrian in mind - and certainly not for the cyclists. Crossing the road in Ulaanbaatar can take a long time.

Tips on Using Taxis in Ulaanbaatar

There are numerous hotels in the heart of the city which are conveniently located for seeing the key sights in Ulaanbaatar. If you do need to go further afield, such as to the airport or to visit villages or the Gorkhii Terelj National Park then you will want to take a taxi or hire a driver. Taxis are unregulated in Ulaanbaatar and will essentially charge you what they want.

You're free to negotiate with them but make sure that you agree the price before you set off and that they understand exactly where it is that you are going. A common trick used by taxi drivers in Ulaanbaatar is to quote one price but then when you arrive they will tell you that the price was per person and so if there are more than one of you, you could end up paying double or triple the price you thought you agreed.

Where is Ulaanbaatar Located 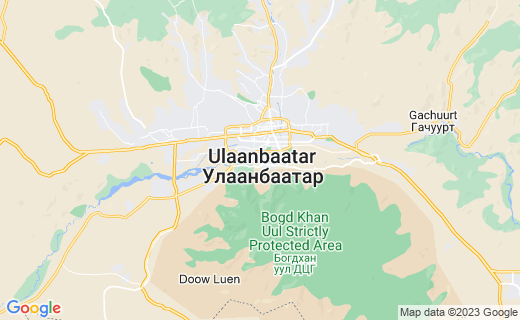 Top Sights and Attractions in Ulaanbaatar

Also known as Chinggis Square, this is both the heart of the city but also the heart of the nation. Here you will find the Government Palace of Mongolia. This is where the government runs the country from and where parliament is held. The square is a great big windswept place surrounded by busy roads but also by some impressive buildings such as the National Museum of Mongolian History, the Mongolian National Modern Art Gallery and the stunning Blue Sky Hotel.

Standing proudly in the middle of the square is a monument to the most-famous of all Mongols, Genghis Khan (referred to in Mongolia as Chinggis Khan). This is an impressive statue of the famous warrior on horseback. It's big, but there's a much larger one not too far away which I shall give a greater mention to further on.

This is a temple which looks much older than it actually is. The Choijin Lama temple dates from the beginning of the 20th century when Ulaanbaatar was a very different place to how it is today. The museum has limited opening hours so check local listing before visiting. You have to pay to enter but it's a very small fee and once inside you will appreciate the serenity and the quiet away from the busy streets of the city beyond the walls.

It's a bit of shame that modern developments have encircled this lovely temple complex but once inside you soon forget about that and you can use your imagination to picture what it would have been like when it was built.

The Museum was recently refurbished but visitors from other countries may still not find it up to international standards. The entry price is low and the exhibits can be covered in a couple of hours. The building is on 3 floors and there is no lift so it can be a tiring outing for anyone not so good on their feet. Exhibits include many elements of Mongolian life through the ages including: old coins, Mongolia in the stone and then the development of early societies, clothing, weapons, ger camps and village life, shamanist beliefs and some political artefacts and videos covering the communist period.

The Bogd Khaan Palace was the Palace of the last King of Mongolia, who died of throat cancer although the museum does highlight a theory that the king was poisoned by the KGB as he opposed the continuing Soviet influence over the country. Visitors are free to walk through the Palace, now a Museum, and see many original features outfits, objects and furniture. Interestingly, so the information displayed at the museum says, the outfits for Natalie Portman etc. in Starwars were based upon the royal outfits of the Mongolian Queens.

More Things to do in Ulaanbaatar

This Buddhist Complex has had a turbulent history and is now being restored. Visitors are able to wander through the rooms while monks chant scriptures. Guests can watch as they are being served butter tea and witness them perform certain rites including the pouring of water around a casket where people could place money as an offering. No photos can be taken of the monks performing these rites. As well as the main Monastery building, the complex includes a 4 storey building which originally housed a 20-ton copper statue of the Buddha which was broken up and taken to St. Petersburg and during the siege of Ulaanbaatar in the Second World War. It was melted down and used to make bullets.

Located very close to the Blue Sky Hotel and the Sukhbaatar Square, the 976 Art Gallery is Ulaanbaatar's best spot for enjoying some original and unique artworks. A great place for every art lovers, Art Space 976 is known as a gallery that supports Mongolian contemporary and post modern artists. Therefore, there are always great exhibitions on display in this gallery. You will find a fresh and inspiring collection of art to suit all tastes in a well presented environment with plenty of space to wander and stand back and admire. The gallery has friendly staff, some of whom will speak a little English.

Where to Stay in Ulaanbaatar

As I say above, Ulaanbaatar is a rapidly growing city. Everywhere you look you will see new high-rise towers shooting up. Many of these towers are for new hotels. Two of the very best hotels in the city are the Shangri-La and the Blue Sky Hotel and Tower.

For value, the 5-star Blue Sky Hotel just about nicks it for me, especially with the Executive rooms on a high floor facing over the Genghis Khan Square. The floor to ceiling windows make for really stunning views at sunset.

However, in terms of genuine luxury you cannot go wrong with the Shangri-La. Up there with the highest standards of hospitality, this hotel is fantastic. You pay top dollar for the pleasure though!

If you have the time, then you really should spend at least one night outside of the city. Stays can be arranged with nomadic families where you get to spend the night in a traditional Mongolian Ger (also known as a yurt - although this is the Turkish word).

If you can only manage day trips then the two that you will absolute want to do are a visit to the Gorkhii Terelj National Park where you will see stunning rolling hills, interesting geological features, nomadic families and wondering packs of horses.

As part of the same day visitors would also be advised to visit the Genghis Khan Statue Complex. This is a huge monument to the famous leader which is intended to form the centrepiece of a kind of Genghis Khan theme park. It was built in 2008 by the Genco Tour Bureau, a Mongolian Company owned by the Mongolian President Battulga Khaltmaagiin. Standing 130 feet tall the statue is the tallest equestrian statue in the world.

In time it is expected that the Genghis Khan Statue Complex will be built out with tourist Ger Camps and themed villages and exhibits that demonstrate life during the ages of the Mongol Empire and the Khan family of rulers.